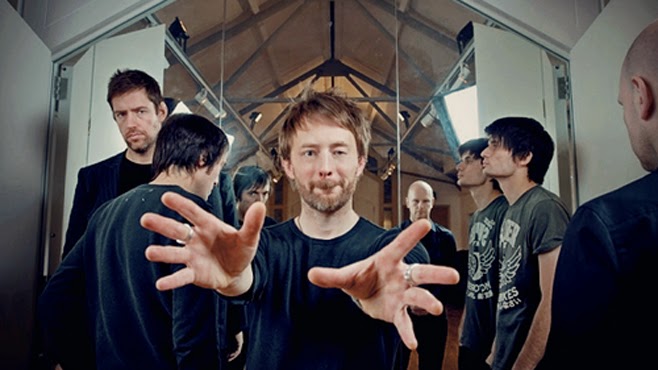 This list is inspired by a one-two punch of great Radiohead cover acts that I heard at The Rex last month.  The first was the Toronto Jazz Orchestra playing (you guessed it!) jazzy and big-band arrangements of Radiohead tunes, and the second was the more traditional cover band, a six-piece rock outfit known as Idioteque.  It made for an overall amazing night of music, with just the minor quibbles that the TJO didn't play "Life In A Glasshouse" (arguably Radiohead's most jazzy number) and Idioteque didn't play "Idioteque," which seems like a major oversight unless they NEVER play the song, for reverse obvious reasons.

The evening really drove home a specific point about Radiohead's music.  It's true that Yorke, O'Brien, Selway and the two Greenwoods can sometimes get a little too caught up in being atmospheric and making technological sound collages rather than tuneful music, yet most of the time that electronic coverage is just dressing for some of the most truly gorgeous melodies any band has ever recorded.  During Idioteque's awesomely spare performance of "Nude," one guy in the audience just blurted out "This song is so fucking beautiful."  He wasn't drunk or trying to be a smartass by saying something amidst the general silence in the room.  I actually think he was legitimately so moved that he was compelled to say something, if perhaps speaking a little louder than he intended.  This is the effect that Radiohead's music has on people.

As usual with all of my "best songs by a band or a solo artist" lists, these are solely my rankings and are very subjective, even for myself; if you catch me on another day, I could rank these songs in a very different order.  While I've heard all of Radiohead's studio albums and a good chunk of their B-sides, I make no claim to being a completist about their work, so it's very possible they have a few hidden gems that I've simply never heard.  (One of my girlfriend's favourites, in fact, is the B-side "Polyethylene.")  I like lots of Radiohead songs besides the ones listed, yet these the ones that I'd consider very good-to-great as opposed to songs that I 'like,' if that makes sense.

I had an absolute hell of a time trying to pick my top choice out of the final four, by the way.  Enjoy the list!