I wish I'd have finished this a few days earlier so I could've published this post on the Ides Of March.

Though "Julius Caesar" is one of Shakespeare's more famous works, this was the first time I'd actually read the play, though it already felt familiar.  Of all Shakespeare's plays, JC is probably the one with the most oft-quoted dialogue.  Even if you've never read the play yourself or generally eschew Shakespeare, you've absolutely heard the likes of  "the fault…is not in our stars," or "the most unkindest cut of all," or "Friends, Romans, countrymen, lend me your ears," or "Cry 'Havoc!', and let slip the dogs of war," or "I come to bury ____, not to praise him," or "cowards die many times before their deaths, the valiant never taste of death but once," or "beware the Ides of March," or I could just go on and on and this post would turn into the Chris Farley Show.

All great lines, absolutely, but I'd argue that JC's memorable turns of phrase have continued to thrive in popular culture in part because this play is our modern connection to the story of Caesar's assassination.  His death and the subsequent fall of the Roman Republic is one of the most influential historic events of the last 2100 years, and the circumstances behind Caesar's killing are still fascinating to explore all these years later.

Notice that I said "the assassination" and not Caesar himself, as ol' Julius is barely even a supporting character in his own play.  This being my first time reading JC, I was surprised that the pivotal assassination scene came only in the middle of the play.  "The Tragedy of Julius Caesar" is really "The Tragedy of Marcus Brutus," who is the real pivotal character of the text, yet I guess Shakespeare (clever theatre operator that he was) knew the most famous name would sell more tickets at the door.  Either that or else this was Shakespeare's answer to Janet Leigh in "Psycho," and by answer to, I mean presaged by about 370 years.  Or else Shakespeare had a time machine, which WOULD EXPLAIN SO MUCH.

That said, the title is almost a metaphor.  "Julius Caesar" is both a character and a Poochie, since whenever Caesar isn't on stage, the rest of the characters are inevitably asking "where's Caesar?" or plotting to murder him, or explaining why they killed him. 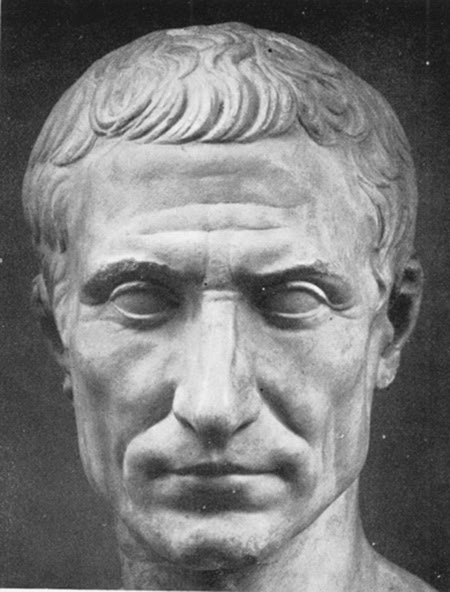 The play's title is also basically the conspirators' reason for the assassination.  This is one of those things that can obviously shift depending on performances, directorial choices and staging when you see the play live, but in text form, Shakespeare makes no bones about the fact that Cassius and the other six main conspirators are about as nakedly envious a pack of rats as one could encounter.  Granted, it mostly seems like they're envious because we so little of Caesar himself --- because we have no basis for their claims that Caesar is power-hungry and would doom Rome if he claimed a throne for himself, we're forced to conclude that they're all schemers.  (Not to mention the actual fake letter scheme employed by Cassius to trick Brutus into joining the cabal.)  Then you have that almost dark-comedy scene after the conspirators have stabbed Caesar to death, and then these geniuses decide it would be a cool move to literally wipe his blood on their swords and arms while saying, "wow, we're awesome, history will TOTALLY celebrate us for this, guys!"  That's a nice little meta moment on Shakespeare's part.

What we do see of Caesar is a guy who has pretty big opinion of himself, often referring to himself in the third person and basically just acting like the cock of the walk.  On the page, at least, it just comes off as innocuous boastfulness, not necessarily arrogance.  There's nothing Caesar does within the text of the play that would mark him as a tyrant and threat to Rome, though Cassius' issue is that people of Caesar's type are corrupted by power and thus Caesar is a problem waiting to happen.  Given that Caesar, Brutus, Cassius and company have known each other for years at this point and been part of past wars led by Caesar, it kind of comes off as if, in the "Henry IV" plays, Hotspur's old drinking buddies had been, "wait, this guy's going to be the king?!  HIM?!  Geez, that'd be a disaster, we'd better kill him now."  Oh man, now I really want to read a comedy about Falstaff and the Boar's Head Pub crew trying to plan a murder and bumbling their way through the entire process.

As noted, this play is really Brutus' story, and his decision to betray Caesar for the ostensible greater good of Rome forms the crux of the tragedy, as Brutus' plan completely backfires and the Republic is engulfed in war.  (Ironically, Rome does end up being ruled under the iron fist of a Caesar…it's just that it's Octavius Caesar, known in history as Augustus, the first Roman Emperor.)  Brutus is meant to invoke sympathy here as his character is presented as acting for what he thinks is the greater good, and he later shows remorse for his actions.  That being said, well, Brutus' name in history has become synonymous with literally being a backstabber.  It's hard not to argue that Brutus got what he deserved for turning on Caesar.  At worst he's a traitor and even at best, he's a sucker who got conned by Cassius, who's essentially the real Big Bad of this whole endeavour.

Also, it's impossible to respect Brutus after his absurd quarrel with Cassius in Act IV, Scene 3.  That scene just kept going and going and almost threatened to turn the play into a farce.  Both characters came off like a tired old married couple who threw 15 years of pent-up frustration into an argument about, say, misplacing the remote control.  Whatever "poor man's Iago" heat that Cassius had going for him to that point was completely rotted away.

JC is similar to "Coriolanus" in that you have a so-called problem play about a political division and the audience can intellectually take the sides of one of a few different viewpoints presented amidst the characters.  It's just that you have to hold your nose as you take those viewpoints, since basically all the characters are awful.  Shades of grey abound.  The conspirators are all scumbags, the common people of Rome are portrayed basically as mindless peons ("give us hell, Quimby!") as evidenced by their attack on the wrong Cinna.  Mark Antony appears noble in opposition to the conspirators but he maneuvers his way into taking over Rome himself.  Then, when he gains power alongside Octavius and Lepidus, Antony immediately turns on Lepidus behind his back.

Still, I had to take Antony's side in this since Marks stick together through thick and thin he's right.  True, he ultimately controls the rebellion against the conspirators for his own gain, but his point about the conspirators going mad with power themselves is not wrong.  I mean, those dudes just got finished gang-stabbing one of Rome's most respected figures to death and their excuse was, "Trust us, we know best."

Shakespeare certainly seems to take Antony's side, as evidenced by Antony's legendary speech in Act III, Scene 2*.  This is one of the most famous scenes in the Shakespearean canon, and while it can certainly be performed in a way that makes Antony look manipulative himself (from the perspective that Brutus is the central 'good guy' who just made a tragic choice), it's hard to argue that while Antony takes the wrong turn in the future, in the moment he's dead-on accurate.  "…and Brutus is an honourable man" becomes such a wicked burn line that it beats Brutus' case to death with its own shoes, Preston-style.

* = at pub trivia one night, we received a question of "who delivered the line 'friends, Romans, countrymen, lend me your ears'?" and the vast majority of teams were shocked that it wasn't Julius Caesar himself.  My team got it correct, so thank you, English degree!

Ultimately, though, I have no issue with whether characters are good or bad as long as they're interesting and written consistently, and needless to say, JC does that in spades.  I'm not going to say the play quite lived up to the hype for me, as it's not in the upper tier of Shakespeare's classics, but it's still a tremendously good read.  For maximum effect, wait until next March 15th and then read the play while drinking a Caesar and eating a Caesar salad.

Also, as a minor coming attraction….I'm doing these plays in a semi-random order, but since we're already on the Mark Antony train, the next entry in my Shakespeare Re-Read will be "Antony & Cleopatra."  Stay tuned!

RANKING THE PLAYS THUS FAR
9. Pericles
8. The Taming Of The Shrew
7. Much Ado About Nothing
6. Coriolanus
5. The Comedy Of Errors
4. The Winter's Tale
3. A Midsummer Night's Dream
2. Julius Caesar
1. Othello

My New Year's resolution for 2012 was to re-read (and in some cases, read for the first time) all 38 of William Shakespeare's plays.  2012 has long since ended, but still, onward and upward.  And, since in these modern times it's impossible to undertake a personal project without blogging about it, here are a series of reviews/personal observances I'll make about the plays.  Well, 'reviews' is a bit of a stretch.  It's William goddamn Shakespeare.  What am I going to tell you, "Don't bother reading this one, folks!  What a stinker!  Ol' Mark doesn't like it, so you should definitely believe ME over 400 years of dramatic criticism!"
Posted by Question Mark at 2:59 PM