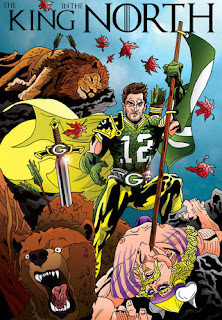 This is what I call an Admiral Ackbar slate of playoff games.  They all seem just a little *too* easy to predict, which means it's a trap!  I mean…

* Cincinnati should beat San Diego since the Bengals are unbeaten at home, it's going to be freezing in Cincy this weekend, the Chargers barely squeaked into the playoffs and their defense can't stop anyone, and the Bengals are just flat-out a better overall team.  BUT…you could also see Rivers having a big game, Andy Dalton delivering one of his stinkers and the Bengals just Cincinnati Bengal-ing their way to yet another playoff loss, as the franchise hasn't won a playoff game in over two decades.

* Indianapolis should beat Kansas City since the Colts have been hot, the Chiefs have been in a slump, Indy just kicked K.C.'s ass not two weeks ago in a road game, the game is at Lucas Oil Stadium, Andrew Luck "just wins football games," etc.  BUT….the Chiefs are healthier, they're probably a better overall team on paper than Indy and the Colts are due for a letdown.

* Philadelphia should beat New Orleans since the Saints struggle on the road, it's going to be absolutely frigid in Philly, the Nick Foles-led version of the Eagles is pretty awesome and again, the Saints are bad on the road.  BUT…if the Vikings' second-stringers can put up 48 points against the Eagles' defense then I shudder to think what Drew Brees can do, the Eagles aren't exactly a good home team, New Orleans has loads of playoff experience and the Eagles have a long and proud tradition of letting down their home fans.

* San Francisco should beat Green Bay because the 49ers seem to be one of the league's very best teams, they absolutely owned the Packers in last year's playoff game and this year's season opener, Green Bay is notoriously bad against physical teams, you could wake Jim Harbaugh up from a year-long coma and he could still outcoach Mike McCarthy, the Packers barely squeaked into the playoffs and may be spent by the effort to just make it into the bracket.  BUT…the game is at Lambeau Field, it's going to be sub-Ice Bowl temperatures in Green Bay, and no team is better a bigger roster boost going into the playoffs than the Packers did with the return of Aaron Rodgers.

So obviously, we can't have all four obvious favourites win, yet obviously all four upsets aren't going to happen either.  That said, I'm going to semi-chicken out by picking three favourites….I'll take the Bengals, Colts, Saints and 49ers.  Yes, that's right, I'm picking against my beloved Packers.  The 49ers were the absolute last team I wanted to see Green Bay face since San Francisco owns them as absolutely as the early-1990's Cowboys owned Green Bay.  Whatever, I'm already exhausted by this Green Bay season --- frankly, just in overcoming the Rodgers injury, winning that huge game in Chicago last week to clinch the division and that big comeback in Dallas, I already feel like the Packers have accomplished something this year.  No need to be greedy.

Also, the existence of that "King In The North" artwork is a bad omen, given what happened to Robb Stark.  The 49ers even wear red.  The Niners should try blasting "The Rains Of Castamere" in their locker room before the game.
Posted by Question Mark at 12:30 PM