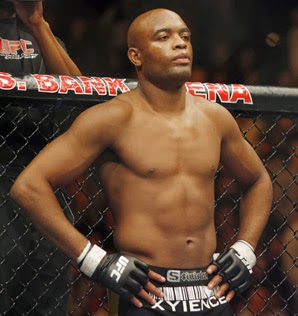 The trouble with being the "Michael Jordan of ______" is that it still doesn't guaranteed a happy ending.  The narrative of Michael Jordan's basketball career ended when he stretched his arm 40 feet to make a dunk that defeated the Monstars hit that NBA championship-winning shot in Game Six against the Jazz.  The reality of Michael Jordan's basketball career ended with two relatively ignominious, postseason-less years with the Washington Wizards, not embarrassing himself on the court by any means but playing under a cloud of "why is he bothering?" every time he touched the ball.

Michael Jordan had the Wizards, Anderson Silva had Chris Weidman.  Even the greatest MMA fighter of all time couldn't go out on his own terms, instead having his career very likely ended in shocking fashion.  First, Silva loses to Weidman last July in a fight that saw Silva do more clowning than Zeppo Marx and finally get knocked cold while in mid-taunt.  Last night's rematch saw a focused, serious and determined Silva lose in an even more painful fashion, as he threw a kick that Weidman checked with his knee, and Silva just flat-out had his shin broken on impact.  It was a horrific injury that I couldn't even bear to watch on replay.  I find it impossible to believe that Silva will be able to fight ever again, and I can only hope that he's able to walk properly for the rest of his life.

It was a thoroughly bizarre and terrifying end to one of the UFC's most anticipated rematches.  Guys check leg kicks in just about every fight; it's a commonplace defensive maneuver, not something that's used as an actual weapon.  In a way, however, it was as sadly ironic a finish as the first Silva/Weidman bout.  Silva first saw his clowning come back to haunt him, and then he saw the legendary power of his strikes used against him.  It was the unstoppable force of Silva's leg against the immovable object of Weidman's knee and as anyone with basic knowledge of the human skeleton will tell you, that particular immovable object will win that battle every time.  It's extremely rare that such a check will actually break something, but Silva must've hit the knee dead-on --- his precision cost him.

At least Weidman won the first round pretty decisively, as the last thing this poor guy needed was another controversial win over Silva clouding his reign as middleweight champion.  Weidman knocks Silva out the first time and all anyone can say is, "well, Anderson would've won if he'd been taking it seriously."  This time, I'm sure those same critics will say that Silva would've won had it not been for the freak injury.  To this, I say that Chris Weidman has fought two full rounds against Anderson Silva and clearly won them both.  In their other two rounds, Silva was finished.  This obviously wasn't the way that Weidman wanted it to go down, but he is the undisputed champ in my books.  Bring on Vitor Belfort.

It's crazy that in roughly six weeks' time, we've seen both Georges St. Pierre and Anderson Silva fight for what I have to believe is the last time.  GSP's "hiatus" sure has the feeling of a retirement, and as TJ Grant pointed out on Twitter tonight, Silva's injury is another sign of just how dangerous it can be to step into the cage.  Granted, Silva's injury was awfully fluky, but St. Pierre was already worried about the long-term damage that his body was feeling from fighting.  I don't see a big paycheque or even competitive spirit changing his mind.

With GSP and Silva gone, the UFC has not only lost arguably its two greatest fighters, but also two of its biggest drawing cards and perhaps two of the last fighters with a true mystique.  I'd argue Jon Jones still has that mystique.  Ronda Rousey is building herself up as perhaps the promotion's next great heel, though a possibly unbeatable one who also carries the added quirk of being the UFC's first female champion.  Cain Velasquez is a monster and a legit baddest-man-in-the-world candidate but he's already suffered one year-long injury absence in his career and now he's facing another one with his current health woes.  The UFC's other champs (Renan Barao, Mighty Mouse Johnson, Jose Aldo, Anthony Pettis, the Hendricks/Lawler winner and Weidman) are all outstanding fighters who seem more or less unbeatable, but they just seem like "outstanding fighters," not larger-than-life attractions.  Other than a Jones/Cain superfight at heavyweight, I don't think there's a fight the UFC could put together that could even approach a million PPV buys.  I'll be interested to see how the UFC adjusts to this new reality when it comes to selling PPVs and TV events, especially since they're planning to run more shows than ever in 2014.

As I noted earlier, I would be stunned to see a 38-year-old Anderson Silva go through what is sure to be an exhaustive and gruelling rehab to step back into the cage in 12-18 months and….what?  What does he have left to prove?  Unless Weidman goes on an insane run over the next few years, Anderson will always be regarded as the greatest middleweight of all time and quite probably the best MMA fighter of all time, pound-for-pound.  Just look at this extraordinary interview with 13 of Silva's ex-UFC opponents describing their encounters with him --- they sound like they were fighting a fictional creature, not an actual man.  Silva's recovery from this injury would be his most unreal feat yet, but for a guy who has seemingly been toying with retirement for the last few years anyway, this certainly seems like the end.

Rare is the pro athlete who goes out on top.  For every Ray Lewis or John Elway who retires a champion, there are a hundred more stars who finally hang it up when they're at a fraction of their former talent and are just hanging on for just one more spark of their old selves to return.  It's unfortunate that this injury happened to a guy like Silva who seemingly had a foot out the door already --- had he beaten Weidman, I wouldn't have been surprised if Silva just announced his retirement right there on the spot after regaining his title.  It's also unfortunate that Silva's name will now be synonymous with brutal sports injuries rather than being the greatest fighter ever, but give it time.  Years of incredible victories will paint a larger picture than a three-second clip of a broken leg.
Posted by Question Mark at 2:46 AM