It was interesting watching "Her" in a more-crowded-than-usual movie theatre with more than the usual number of audience distractions.  The guy in front of me had his phone out the whole time (not talking on it, but with the bright screen shining), there was a kerfuffle in another aisle with someone accidentally kicking over someone's drink, there was a lot of shushing, etc.  While I was still able to enjoy the film, I couldn't help but wish I was watching it just on my own, on my laptop, in the comfort of my own home.  Talk about a relationship with a computer.

It's for this reason that the somewhat goofy-sounding high concept of a lonely guy falling in love with his advanced operating system really works.  This is one of those Black Mirror-esque "five minutes into the future" scenarios that doesn't seem so outlandish when you consider how much time we spend online and how some have completely different "lives" in their online personas.  Is falling in love with the disembodied voice of your operating system any weirder than Theodore's late-night talk-each-other-off session with "SexyKitten69" (Kristen Wiig with the vocal cameo!) just because SK69 is a real person?

The movie takes Theodore and Samantha's relationship completely seriously, barring a couple of comic moments that stem from the unusual nature of the coupling.  The other characters take an "oh, how about that" stance to Theodore dating his OS, and it's even established that human/OS relationships aren't an uncommon thing in this world.  Now, it should be noted that Samantha is a particularly advanced operating system that is literally evolving throughout the movie, so it's not like Theodore is falling in love with, say, Twitter.

The other key to this film working, of course, is that Scarlett Johansson absolutely knocks it out as Samantha.  I dare say this is one of the best vocal performances I've ever heard and it's a real impressive showing (even if she doesn't show up on screen) from an actress I've always been somewhat indifferent towards.  Johansson has more personality as Samantha than she has as her actual human characters.  Anyway, enough backhanded compliments --- you can tell through voice alone how Samantha is changing as a, uh, person (?) throughout the movie.  Pregnant pauses play a big role in the dialogue between she and Theodore*, and the two have as much or more chemistry than most screen couples.  You know why they're falling in love and you know why they're coming apart.

* = Joaquin Phoenix, by the way, is also tremendous here.  It's kind of refreshing just to see Phoenix play a semi-normal guy after years of peculiar roles.  That's right; compared to Phoenix's usual stuff, "guy who falls in love with artificial intelligence" is actually a normal role.

I always enjoy the kind of immersive sci-fi that places you within an unusual world and then spends the narrative revealing various little quirks of this world's "rules," or how the scientific differences have permeated society.  "Her" has plenty of such details, like the concept of the operating system surrogates, or how the operations systems communicate with each other, or simply just the idea that an OS can naturally evolve past its programming.  It's a tribute to Spike Jonze's script that he knows which of these ideas to explore and just touch on, leaving certain things to our imagination.

"Her" is maybe my favourite film of the year.  And don't take my word for it, the ultimate Her enjoyed it too! 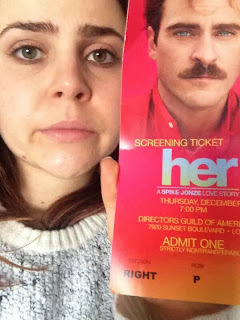 Posted by Question Mark at 6:39 PM