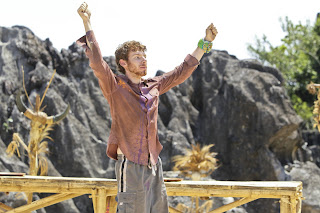 Cochran conquers all!  I'm going to withhold my usual "where does he rank amongst the rest of the winners" stuff for two reasons.  One, I'm going to be doing a rewrite of my old Best Survivor Winners post that incorporates the victors from the last four seasons, plus some minor shuffling of the rankings themselves.  Two, as I'll explain below, I'm kind of re-evaluating how to judge these seasons that feature returning players against newcomers.  Anyway, onto John Cochran.

How He Won: As a student of the show, it's no surprise that Cochran won using the same method that won Parvati S16 and won Sandra S20.  Both of those returning player seasons (Parvati a Fans vs. Favourites, Sandra an all-oldies cast) featured the winners getting to the end within a small core alliance that seemed shaky since it seemed to be constantly cutting off members on the outskirts of that core.

But, as Cochran put it in his (obviously excellent) jury speech, the key was to eliminate these threats before they had a chance to eliminate you.  Parvati, Cirie and company did this en masse to the male players in S16, Sandra sat back and let Russell destroy others and himself in S20 and Cochran did this by scheming to eliminate Andrea and Brenda from the remnants of "Stealth R Us" and getting to the end with his preferred partners of Dawn and Sherri.  I suspect Cochran would've won against virtually any F3 partners aside from maybe Andrea or Malcolm, but since it was Dawn/Sherri, it was no shock that he got a unanimous vote.

So it was basically old-school alliance Survivor with the added wrench of all the returning players being smart enough to know that they needed to make additional moves.  This is where the season's gimmick comes into play and why I'm rethinking my methodology in ranking Survivor winners.  Essentially, most returning players simply have too big an advantage over newbies and when you get a full-on Fans vs. Favourites situation, it becomes a rout.  We saw it in S16 and we saw it here, as the fans quickly fell behind in the tribal portion of the game and then became just cannon fodder for the favourites to use as pawns after the merge.

Now, this isn't to say that this necessarily makes the show uninteresting, though it just makes the pre-merge episodes uninteresting.  I think the producers realized this themselves, which is why 80% of the pre-merge episodes were devoted to Brandon and Phillip's antics.  It's basically a reverse Pagonging --- whereas in most seasons the maneuvering takes place before the merge and one tribe picks the other off once they get an edge, in fans/favourites seasons things only get interesting ONCE the majority of fans are culled and the experienced players then get to battle each other with a few extra fan bodies thrown in as the equivalent to Christian Laettner on the Dream Team.

Sherri, Michael, Eddie and Reynold didn't do anything themselves after the merge, nor were they in position to do anything besides glom onto a favourite and hope for the best.  (Sherri won that little battle, though it was largely because she was the least-threatening of the bunch.)  It's kind of ironic that Cochran won this season since I believe what caused his downfall in S23 was that he himself was kind of starstruck by Coach and thus turned on his old alliance since Coach gave him the time of day and made him feel special.  Cochran was the newbie pawn in his first go-around, now he was the one maneuvering past the pawns this time.

This all being said, Cochran had nine other returnees to deal with, and how he navigated his way past them was very impressive.  He had to deal with just about an equally-smart strategist in Andrea, a very athletic and likeable wild card in Malcolm (who also had the edge since none of the others had seen his previous season), Phillip's nonsense, Erik's under-the-radar danger as both a physical threat yet someone who was seemingly coasting along making no enemies, Brenda's strong physical and social game, and Dawn's newly-aggressive gameplay and seemingly her daily mental breakdowns.

Add the fans to the mix, plus the usual X-factors of injuries (that F5 could've played out much differently with Erik in the mix) and some REAL bullshit with the hidden immunity idols*, and Cochran had to dodge a lot of bullets.  He made a huge improvement over his last appearance, needless to say, similar to how Parvati went from being a seeming token entry in S16 to leaving as the winner and a new reputation as one of the best players ever.  While I'm not going to go that far with Cochran, he definitely showed that his "Survivor genius" label had some real merit.

* = Ok, so the fact that there was another HII for Malcolm to find in the Phillip boot episode was nonsense.  It's been a staple of the show, albeit not a strict rule, that there is one HII for every existing tribe.  Since by this point they were a merged tribe, there should've just been the one idol in play (a.k.a. the other one Malcolm had in his possession) and the previous idol should've been gone from the game.  I am 1000% certain the producers tossed that second idol back into play just to spice things up and see if it could prevent one of Malcolm/Eddie/Reynold from going home that night.  It worked dramatically, given that it led to one of the craziest tribal councils ever, and nobody raised a stink about it since it led to the elimination of the unpopular Phillip, but it was very, very fishy.  A reality show playing fast and loose with the rules for the sake of entertainment?  The hell you say!

Skillset: Well, the guy's a challenge monster, for one!  In all seriousness, though, I enjoyed how Survivor mixed up the challenges this season, creating a nice blend of pure physical tasks and more varied things like willpower challenges or old classics like eating gross food.  It levelled the playing field enough so a non-physical player like Cochran could actually hold his own in the competitions.  There should never be a sense (or reality) that the good athletes have an inherent advantage in the game, since it not only makes things fairer for all involved, it also makes things fairer for the athletes themselves; Malcolm openly said that he was aligning with Reynold and Eddie since they were all in the same boat as "challenge threats."

But obviously Cochran's best assets are his smarts.  He is very good at cutting off future potential threats and backstabbing alliance members, though he did it with no blood on his hands since it was all in the name of the game.  Cochran came off as a bit of a dick in his first appearance, sort of a nerd with a chip on his shoulder like Ken the gamer in S17, and as I wrote about him in the S23 recap, for all of his theoretical Survivor knowledge, Cochran seemed ill-prepared for the fact that the game actually took place outside.

It could be that all he needed was some field experience.  This time Cochran was clearly better prepared to actually last 37+ days outdoors and his rough edges personality-wise were smoothed out (or edited out) and he apparently came off to all like a loveable, self-deprecating good sport who had some serious game.  His sense of humour was likely a big help to a Favourites tribe that had to put up Phillip's Stealth R Us gimmick, Brandon's legit insanity and Dawn's emotional outbursts in the early part of the game, and Cochran/Andrea emerged as a rational core within a scheming, fractured group.

Cochran owes an assist to Dawn for providing the intel on the Malcolm/Eddie/Reynold/Corinne/Michael/maybe Erik power play that led to Corinne's ouster (really dumb move on Corinne's part to tell Dawn, btw), since that was one of those turning points that would've turned his whole game sideways.  Three other moments of luck…Erik's medical evacuation, Phillip falling on his sword during the "three Amigos all have immunity" tribal council since it's possible Cochran could've picked up some votes in the chaos, and the tribal member swap that didn't hurt or devastate Cochran's chances.  If you believe internet scuttlebutt, the tribal swap was arranged so both tribes would still be 4-3 for the Favourites, so Cochran would've probably been safe no matter the alignment.

Could He Do It Again?: This will be the next challenge for Cochran, since I highly suspect he'll return to Survivor again for at least one more series.  Now that he's stepped up as a legitimate player, his next trick will be to avoid the huge target on his back.  In an all-returning player series, Cochran is a natural early elimination since a) he's a threat, and b) he's not an asset in most team challenges, so he could get an early boot then.  He didn't have to worry about an early exit this time around since his Favourites tribe rarely lost, and when they did, they had Francesca and crazy Brandon to eliminate first.  You'd think that now the "legend of Cochran" as a Survivor savant has grown to the extent that other returning players would be wise to cut him off at the earliest opportunity, like how Cirie got the early boot in her third Survivor series.

Though I have issues with the evenness of a Fans vs. Favourites season in general, Cochran still played a strong game and is a worthy winner.  How worthy?  You'll have to wait until my revised rankings to find out.

/puts winners' names in jar
/walks away
/jumps into speedboat
/boats to CBS studios in New York or Los Angeles
Posted by Question Mark at 1:55 PM