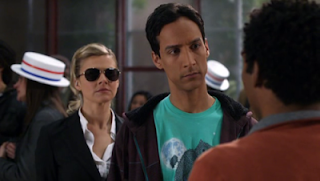 Didn't it feel like Community had already been canceled?  Between all the creative drama behind the scenes, the long break between the third and fourth seasons, cast members popping up in other projects and the fact that NBC is moving its entire network away from what Community represents, it felt almost weird to actually watch a new episode of Community last night and realize that the show was still on the air.

That disconnect seemed apparent in last night's episode too, which just seemed 'off' in a way that I can't quite put my finger on.  There was almost a sense of going through the motions.  You had the gang confronting a school issue, a threat to the group's togetherness, everyone coming to grips with it, and at least one major pop culture reference in the 'Hunger Deans' (which I'm glad was just a relatively minor part of the episode, since starting the post-Dan Harmon Community with a full-on genre parody would've been too bold a step).  As you might expect, Community poked fun at its own creative changes in the form of Abed's daydream about a generic sitcom version of the show, but even that felt obligatory in a way.

This all being said, however, I don't know if this was the show's fault or the fact I'm preconditioned to not accept the "new" Community.  For instance, if Harmon was still running the show and I'd heard they were doing a Hunger Games gimmick in the premiere, I would've been fired up.  Without Harmon, hearing about the Hunger Games schtick made me worry, sort of like, "Hmm, that's a pretty obvious, fresh target, isn't it?  Trying a bit too hard, aren't we Community?"  The show almost can't win in delivering its actual product since I (and the bulk of online media) are too busy overanalyzing and overthinking every detail.

I have half a mind to skip Community during the actual season and just wait until summer to watch the whole thing in bulk, when I've gotten a bit more space from the media groupthink  It's times like this that I wish I wasn't as plugged into entertainment news.  Because I know these shows are being produced differently, I'm automatically reacting to them differently, whereas the layperson wouldn't notice any differences in these seasons of the programs as opposed to previous seasons.  It's the old blind taste test theory --- if you handed me a glass of RC Cola and a glass of Coke, I might well not be able to tell the difference, despite my snooty attitude towards cola drinks.

For example, back in my younger days, I think I vaguely heard about Larry David leaving 'Seinfeld,' but it didn't affect how I watched the show whatsoever.  I still found the last two seasons to be incredibly funny with maybe a slight dip in quality, but I attributed that to the show being in its eighth and ninth seasons, not due to David leaving.  When I was a teenager, you see, the names in the credits were basically just names to me.  I didn't care what was happening behind the scenes just as long as what was on the screen was still entertaining.

To be fair, I've seen a grand total of one Community episode in the Dan Harmon-less era, so I'm more than likely jumping the gun in making any grand proclamations about the state of the "new" show and this entire post could well be just fanboyish bullcrap.  After several episodes of the latest Happy Endings season, however, I feel more comfortable in saying that the show has more than a little gone off the rails, and we're nearing a shark jump.

Happy Endings was a real breakout last year --- an instant "catch up on every episode in a week" blitz and then it became a go-to recommendation for friends who asked me if I knew of any funny new shows.  Then this current season happened.  There are enough sparks of greatness still left (the recent pranking episode, for instance) that I'm not wholly convinced that the show has lost it but man, what a shift in tone.

Happy Endings has always been pretty broad and fast-paced but this season has gone from broad to straight-up farcical.  There is no basis in reality any more.  The characters don't speak deliver lines as much as they recite puns to each other in funny voices.  Oh god, the funny voices.  To the person who decided that "ah-ma-zing," "suh kyute" and Damon Wayans' various high-pitched intonations were the best part about the show and made the ENTIRE CAST deliver HALF THEIR LINES in singsongy slang, I will save you a seat in hell.  There's no flow to the scenes any more since the actors all seem like they're Michael Scott in an improv class, just firing off their bits without any concern for how the rest of the scene develops.  It's not impossible to reach a high level of fast-paced uber-punnery (i.e. 30 Rock) but it's very very difficult, and Happy Endings is simply not delivering.

As coincidence would have it, Community's new showrunners are Moses Port and David Guarascio, who most recently were executive producers on Happy Endings.  I'm not sure how involved Port/Guarascio were in the day-to-day operations on HE and again, this could again be me reading too much into behind-the-scenes machinations, but it's interesting that for as much as everyone was terrified that Port/Guarascio would "ruin" Community, there was little consideration given to how their departure would impact Happy Endings.  Maybe these two were the VPs of common sense in the Happy Endings writers' room, keeping everyone aware that they were making a unique show, not just "Friends" on speed.

These criticisms could all be short-lived, of course.  Happy Endings is on life support ratings-wise and you have to figure that Community is on its last legs, though NBC's yawning chasm of a comedy lineup might force them to bring back one of its few shows that actually has a fanbase.  If these two go, that's another drastic cut to my comedy viewing habits, which are already being sliced by 30 Rock ending, the very cute Ben & Kate getting canceled and the withered husk of The Office concluding its overdue final season.  I needed a fresh program like Happy Endings to fill that void, so forget about the ratings, the fact that it's already in a decline phase is awfully disappointing.

(If you expected me to mention Two Broke Girls at some point, I guess the title of the post was a tad misleading, but shyeah, I'm not talking about that disaster.  Do you realize how bad a Kat Dennings-centric show has to be for me to not watch it?)
Posted by Question Mark at 6:10 PM