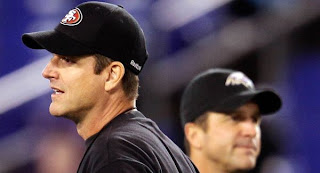 Brotherhood was a major theme of this Super Bowl.  (Besides just this adorable Budweiser ad.)  For the first time in major pro sports history, two brothers were opposing each other in a championship game.  As much as football fans had gotten used to the Harbaughs as top coaches and had wrapped their minds around the possibility that they could one day meet in a Super Bowl, it's still a crazy thing to actually have happen.

Perhaps it was fitting, then, that this battle of brothers mirrored another showdown in my football fanverse.  On one hand you had my buddy Trev, one of my best friends and a "brother" in every way but biologically, supporting his 49ers.  On the other hand you had my actual brother Matt, a diehard Ravens fan.  As a Green Bay supporter I was somewhat neutral on paper, since even though the Packers got destroyed by the Niners a few weeks ago, I had no real beef with the team.

So who did I support?  The 49ers, naturally.  Trevor, you see, is a casual (some might say 'mature') sports fan.  He likes his team but his fandom more or less ends on game day.  He doesn't load up on team apparel or follow a bunch of silly game-day superstitions or write lengthy blog posts whenever his team gets knocked out of the playoffs.  My younger brother, on the other hand, is as nuts about his Ravens as I am about the Packers.  He is never to be found on game-day without his trusty Ray Lewis jersey and yes, he has been known to do the dance.

So essentially I was forced to root for the 49ers out of self-preservation, since I'd be in for a metric ton of chirping if Baltimore won the Super Bowl.  If the Niners had won, Trev might've barely mentioned it.  Matt, on the other hand, will turn the trash talk up to 11 now that his team has actually won it all.  It may even top….uh, my smug trash talk when Green Bay won the title two years ago.  Like I said, we're pretty similarly immature about this stuff.  Though my brother and I are men in our thirties, we bicker like children when it comes to arguing which team is superior.  Of course, the Packers are still the far superior overall franchise and really, the most dominant franchise in football history, and you've just gotten a taste of my key argument for the coming offseason.

Man, did the Ravens really just win the Super Bowl?  I can't believe this actually happened.  They went on a New York Giants-esque run of suddenly turning it on after a so-so regular season, making huge plays on both offense and defense, and also getting monstrously lucky at key times.  I mean come on, those two Denver DBs suddenly forget how to play football and/or just FALL DOWN when Flacco heaved up that hail mary at the end of that playoff game?  The Ravens are lucky enough to draw the Broncos in the first place, given Peyton Manning's long history of choking in playoff games?  During the Super Bowl, you had the uber-efficient and well-coached 49ers suddenly look like a bunch of bumbling fools in the first half with dumb turnovers and penalties?  Don't tell me that Lewis is right and there actually was a higher power working on the Ravens' side.  I don't deny that Baltimore beat the Colts and Patriots handily and took it to the Niners but man, Lady Luck has been wearing a purple jersey for the last month.

Adding to the superstition factor was….well, me.  It's very possible that the year-plus of trash talk I'll get from my brother is due to this anti-Joe Flacco post I wrote about a year ago.  As you'll note, I had Flacco as the 15th-best quarterback in the NFL, behind such luminaries as Phil Rivers, Michael Vick and Tony Romo.  I may have not quite been fair enough to Joe, in hindsight.  My revised list…

Top tier: Aaron Rodgers, Drew Brees, Tom Brady, Peyton Manning, Eli Manning
Hard to argue against any of these guys as one of the best in the business.  The shakiest of the five is Eli and, well, the two rings are good for shutting up a lot of naysayers.

The QB ranking list is difficult since it's a battle between "who would you rather have" and "who do you think is better?"  They're two very different questions.  For instance, virtually any team would "rather have" a star rookie like Wilson, Griffin or Luck since they'll be around for years to come.  (Presuming, of course, that RG3's knee isn't already destroyed.)  That said, someone like Flacco is clearly better than, say, Luck at this particular moment in time.  If you had an otherwise Super Bowl-ready team and were given the option of taking any of these middle tier guys as your quarterback, Flacco doesn't beat out Wilson because he's special and doesn't beat out a healthy Roethlisberger due to his proven winning ways, but Flacco really does beat everyone else.  Flacco's ring gives him the edge over Griffin.

The knock on Flacco was that he always made some mistake to prevent Baltimore from winning, but this year, he turned in a very Eli-esque postseason.  He made big plays, threw some crazy long bombs and overall was actually a strength for his team, rather than just the "don't screw up" guy.  Now, I can rant all day about how incredibly lucky Flacco was given that his only move is to chuck up a deep ball and hope for the best (a.k.a. the Detroit Lions offensive game plan), but damned if it didn't work out.  As I noted earlier, the ring is a good way to end an argument.

So congratulations Joe Flacco, I now consider you to be a top-ten NFL quarterback.  (You're #8 on my list, which is doubly ironic since #8 is also my brother's favourite number and his old hockey jersey number.)  I'm sure this honour will rank right up there with winning the Super Bowl.  You should be very happy with yourself and will no doubt earn a mountain of money in your next contract, but no matter what my brother may say, you're not Aaron Rodgers.  Clearly not.  That's crazy talk.

I'm searching for bright sides here, as I dread the coming year of abuse from Matt.  Let's see….well, my friend Brian is also a Ravens fan, so he's happy.  That's cool.  Obviously the city of Baltimore could use the pick-me-up of a major sports championship since they're going through some tough times --- I know this since I watch The Wire and am therefore an expert on Baltimorean culture.  Had the 49ers won, they would've been a perfect 6-0 in Super Bowls and might've had a claim on the "all-time best franchise" title, so it's better for Green Bay that San Francisco fell short.

And one more.  The Ravens' Harbaugh, John, was the OLDER of the two brothers.  So really, his victory over the younger Jim really represents a win for big brothers everywhere.  Yes….that's the ticket.

Oh brother.
Posted by Question Mark at 1:39 AM