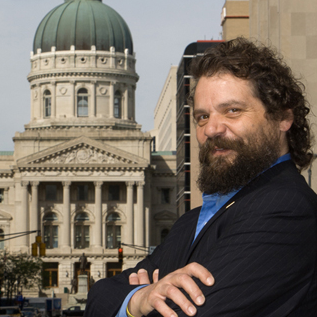 Sure, it was great seeing Obama win and all, but the real highlight of the 2012 election season happened when whatever network I was watching showed the preliminary results of the Indiana governor's race.  The eventual winner (Mike Pence) had a narrow lead over the Democratic challenger, and in a distant third was the Libertarian candidate, who was just listed as 'Boneham' since the graphic was only featuring last names.  I chuckled to myself, not in a Beavis way (huh huh, BONEham.  Huh huh), but rather amused since the only person I knew with that last name was iconic Survivor player and tie-dye shirt enthusiast Rupert Boneham.  Clicking on the laptop, I decided to check out more info about the Indiana governor's race to see if the candidate was related to Rupert…

…only to discover that IT ACTUALLY WAS RUPERT.  FRIGGIN' RUPERT FROM SURVIVOR WAS RUNNING FOR GOVERNOR.  WHAT THE WHAT.  I have no earthly idea how this had escaped my attention until election night itself, but my god, it was true.  Here is his campaign website, which sadly doesn't include any action shots of Rupert in his tie-dyed wonder, though his campaign logo looks suspiciously like a Tribal Council torch.

As the good people of California, Minnesota and Alaska can tell you, America has a long history of electing some pretty wacky-ass governors to run its states, so a Boneham administration actually wouldn't be the craziest thing to ever happen, but man, still.  RUPERT.  I can point to a few reasons why he came up short.

* It's hard to convince voters that you're a competent leader once they've already seen you thoroughly outwitted and outplayed (on three separate occasions!) on a reality show.

* Rupert didn't show much leadership during the legendary Dustin Hoffman/Daniel Radcliffe Scrabble controversy.  If he can't manage that, how can he manage a state's business?

* The crazy-man beard.  Admittedly, seeing Rupert without a beard would be like seeing a clean-shaven Santa Claus, but still, it doesn't look terribly professional.  This is just a social norm, however, not my personal feelings.  I'm personally all for politicians having nutty beards; virtually all of them had wacky facial hair until about the 1930's, then suddenly it was no longer cool.  Nowadays the only politicians I can think of with beards are Thomas Mulcair and Michele Bachmann.

* It's tough for any third-party candidate to break through and actually win an election.  Heck, third party candidates couldn't even unseat Kang or Kodos back in 1996.

Rupert ended up with four percent of the vote, a respectable showing for a guy who do any better than fourth place on Survivor.  Furthermore, Rupert was seen leaving the governor's mansion with a rock in his pocket, so Russell Hantz at least believes Rupert actually won the election.
Posted by Question Mark at 4:01 PM