I'm usually not a "spectacle" guy when it comes to movies.  Some folks see movies as primarily delivery systems for the kind of visuals, special effects and epic vistas that you simply can't get in any other form of media, and while I appreciate that (and realize that, in large part, this is the reason why cinema became popular in the first place), I just like a good story.  That's it.  No matter what James Cameron might tell you, visual smorgasbord-style films are way easier to make than films with genuinely interesting, unique stories.

So after establishing that, I'll now directly contradict myself by saying that I loved Cloud Atlas.  I'd rank it amongst the best movies I've seen all year.  The overall theme of "everything is connected and we all play a role in each other's lives" is about as cliched as it gets, and yet man, this film is something to see.  The gimmick of the film is its six plotlines, each of which is set in a different time period ranging from the 1840's to centuries in the future.  It takes about 20-25 minutes to get introduced to every story and get used to the switching between the six, but it's not terribly hard to follow, especially since the six stories directly and indirectly reference each other in various ways.  All six also climax at the same time, leading to about an hour straight of pure drama.  It's a very long film (close to three hours) and while you could've trimmed 20 minutes from the final product, it certainly doesn't drag.

The Wachowski siblings directed the 1840's seafaring adventure and the two stories set in the future, while Tom Tykwer directed the stories set in the 1930's, 1970's and 2012, respectively.  The Wachowskis, of course, are most famous for the Matrix series and while Cloud Atlas shares those films' habit of trying to make grand statements out of very basic pop philosophy, CA is much more focused, despite the several stories.  Tykwer directed 'Run Lola Run' and I've spent the last decade-plus thinking he's a good director based on that one great movie, though he's done nothing but disappoint me since until now.  What made RLR interesting, though, was that while none of Lola's three realities were alone strong enough to sustain an entire movie, the three in combination were, and the same is true of Cloud Atlas.  You can overlook the weaknesses and inconsistencies of each individual story since ultimately they're just one-sixth of the overall movie.  The 1930's tragic romance and the far-distant future drama were probably the strongest of the stories overall, while the 1970's thriller had a lot of holes and the 22nd-century sci-fi extravaganza felt like the Wachowskis were just trying to rehash both Matrix and Speed Racer. 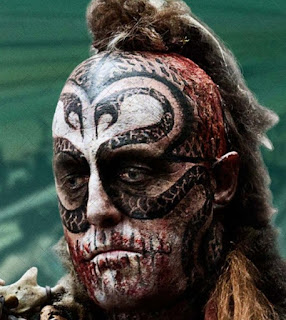 The other gimmick is that virtually all the major and minor roles in each story are played by the same group of 13 actors.  The size of the roles range greatly in size from story to story (Halle Berry might star in one story and then just make a tiny cameo in another) and there are no major connections between the actors and the characters they play in each story, aside from the fact that Hugo Weaving and Hugh Grant always play the villains.  You need a versatile group to accomplish this, and the likes of Weaving, Grant, Berry, Tom Hanks, Jim Sturgess and the immortal Jim Broadbent are more than up to the task.  Broadbent especially, man, why isn't he more famous?  I mean, he has an Oscar and he is working constantly, but I feel like he should be there in that Phillip Seymour Hoffman group of actors who aren't superstars but everyone would say, "Oh yeah, he's an awesome actor" whenever they're mentioned.  Beyond the big names, the lesser-known Doona Bae and Ben "the new Q in Skyfall" Whishaw are both asked to carry a story each and they do it very well.  Weirdly, Susan Sarandon is in the cast but has only small roles in four of the stories.  You couldn't find something more for Susan freakin' Sarandon to do, team?

This isn't the first movie to use a gimmick like this, but I admit, I found the game-within-the-film of spotting the various actors in the different stories to be an awfully fun sideline.  Cloud Atlas has some under some criticism for taking this acting exercise to the extreme and having some actors play characters of different races, in varying degrees of believable makeup and prosthetics.  Obviously I don't think the filmmakers were trying to be offensive in any way, and I think was just a production decision rather than, y'know, cast Asian actors to play Asian roles.  (As it is, the white actors playing Koreans end up just looking like Vulcans.)  Beyond just the "same cast in all the roles" gimmick, the filmmakers also might've literally been limited to hiring a certain number of actors --- despite its $100 million budget, Cloud Atlas was actually an independently-produced movie, so if you've got the likes of Tom Hanks and Halle Berry in the fold, you might as well use them as much as possible.

Besides, the major prosthetics and makeup made the role-identifying game much more fun.  For instance, that fellow in the picture?  Hugh Grant, naturally the first person you'd pick to play a post-apocalyptic cannibal warlord.  (Zhou Xun's character in that same storyline looked oddly like my friend Christine.)  The end credits list the actors and show which roles they played, which led to some funny "whoa!" reactions from the audience at my theatre.  Funniest comment was from a girl behind me who said, "wow, that was ALL Tom Hanks?"  Now, if you've seen the movie, Hanks is the one actor who escapes any real involved prosthetic work.  I mean, he's got heavy makeup on in a few of the stories but you can always clearly tell it's Hanks.  I imagine when this same audience member walked out of Master Of Disguise, she was blown away that it was Dana Carvey the whole time.
Posted by Question Mark at 5:40 AM