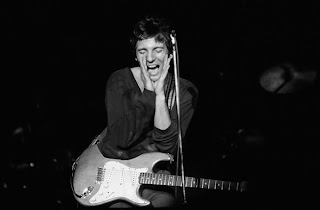 After hitting up U2 and the Beatles, we hit the next member of my personal musical Mount Rushmore, the Boss himself.

As always, I cut things off when I got to the songs that I just 'liked' rather than really liked or loved.  That number ended up being 79, so as always, if I've left your favourite Springsteen song off the list, just pretend I had it at #80 and it was a tough, agonizing, last-second cut.

This was one tough list, btw.  Not only did I have my usual vague feeling that I could do this list again tomorrow and the order would be markedly different, but such a ranking is difficult for Bruce songs since they vary greatly from the album cuts to the live versions.  To use one example, "4th of July, Asbury Park" wouldn't be here if I was ranking album tracks, but the live version was probably a top-25 song, so I just split the difference.  I think what clinched it for my #1 choice was that the album track, the live version and the acoustic/piano live version are all phenomenal.  Truly it is the song of champions, and yet it was still a tough call since I so dearly love the #2 song on this list.

Another caveat: though I'm a big Springsteen fan, there are undoubtedly loads of B-sides and rarities I've never heard before, so for all I know, I haven't heard my favourite Boss song yet.  That's the beauty of being a fan of a musician with such a deep back catalogue --- my #5 pick, for instance, is a fairly obscure B-side that I hadn't heard until a couple of years ago, and now I love it so much I want to dance to it with my daughter at her lesbian wedding.  Also, it's a tribute to Bruce's 40+ years of recording consistency throughout the years that I've got at least one track from each of his studio records….except for 'The Ghost Of Tom Joad,' that album sucked.

If you don't recognize a title on this list, I heartily recommend checking it out on YouTube, since there are few better ways to spend couple of hours than falling down a YouTube hole of Bruce Springsteen music.  Onto the list!

I'd definitely put Atlantic City #1, but I'm not going to get up in arms about it being #2.

Think you've overrated The Wrestler...and really overrated Murder Incorporated (which is a fun track, but hardly top 20 worthy). Aside from that, my only other beef is "I'm On Fire" being way down at #25 (one behind "Blinded By The Light," even though Bruce's version is--to my ear--pretty lousy.)