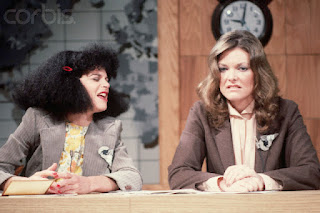 Just one man's opinion, of course.  Granted, a man who has seen every episode of SNL since 1997 (January 11, 1997, to be exact) and dozens of older episodes courtesy of reruns on the Canadian Comedy Network.  So while this is just my humble opinion, it's not at all humble --- bow down to my SNL knowledge, jerks.

Comic versatility and length of tenure were two factors I took into consideration for the list, but the overriding factor was simply judging people by how funny I found them specifically on Saturday Night Live itself.  This was more difficult than it sounds, since some people who did nothing on the show went on to have great careers after leaving Saturday Night Live, and vice versa.  For example, Robert Downey Jr. was nowhere close to this list and he was arguably the best actor the show ever turned out.  (Yes, Robert Downey Jr. was once a cast member on Saturday Night Live.)

I tried as hard as I could to keep post-show bias out of the equation, but it's probably impossible.  And, while I've seen a lot of the older episodes, my knowledge of those eps and casts is obviously not nearly as strong as my knowledge of the last 15 years.  Also, I should note that I was picky about the official "cast member" designation.  If you were just a featured player, then no dice….hence, no Al Franken.

Before, we get to the list proper, let's get to the honourable mentions, or as I call it, "The Rest."

My methodology for the list was to look at every person who's ever seen in the SNL cast, and immediately sift out the ones that I never found funny or never/rarely ever saw perform.  From there, I had a list of about 90-some odd people that I pared down to around 60, then got to numbering.  After the top 44, however, I found myself really labouring to rank one over the other since really, I could take or leave pretty much everyone in "the rest."  So here they are, in one big blob.  If your favourite is in here, just presume I would've put them at 45th in a just and fair world.

A few notes on some of these cast members….

* Chase, Miller, Spade and Morgan are all love 'em or hate 'em comedians.  Either you enjoy their schtick or you don't, since they're limited enough that they don't give you any other options.  I wasn't crazy about any of their SNL tenures so here they are.

* McKinney and McKean are prime examples of the "judging them just on SNL" rule.  If we're ranking people on pure sketch comedy ability, these two are not just on the list, but making respectably high showings.  McKean, in particular, was hurt by the fact that he had just one season on SNL and he didn't get much to do.

* Darrell Hammond, man of a million impressions and none of them (save Bill Clinton and Sean Connery) actually funny.  I sincerely believe that the only reason he was on the show for 14 years wasn't because "he was the only one who could do the political impressions," but rather Lorne used the show as a way of keeping Hammond relatively stable form his drug and alcohol addictions.

* I feel like the entire 2003-2006 span of Saturday Night Live could be summarized by Amy Poehler's Weekend Update laugh.  You know, when Fey or Fallon or Sanz or Meyers or even herself would tell a joke that bombed hard, Poehler would chime in with this high-pitched chirp of a laugh.  The effect was "Hey, no problem folks, we're all friends here, here's another joke!"  That's all well and good….but while the cast camaraderie was arguably never higher during this period, the show sucked.  Guess what, I'd take a FUNNY cast that's back-biting and at each other's throats backstage any day of the week over a bunch of giggly best friends who act like they're in a ninth grade talent show.  I liked Poehler in her first season and then things just spiralled downhill from there, to the point where I was actively cringing at her appearances.  I fully recognize that most would rank Poehler quite highly amongst all cast members and mine is a minority opinion, but it's my list, so (puts on sunglasses) deal with it.  It's weird, I don't care much for Poehler as an actress whatsoever except for Parks & Recreation, where she is beyond perfect and great in the role of Leslie Knope.  It's like a band whose music you hate except for one awesome song.

* I've said this before, but Jimmy Fallon is either the most overrated SNL cast member of all time or the biggest waste of talent in the show's history.  Here's a guy who obviously has comic ability and is a gifted impressionist, yet even though we saw glimpses of it on SNL, it was buried under 15 tons of giggly nonsense.  Fallon literally did break character and start laughing in at least 50 percent of his sketches and I'm probably being generous in that assessment.  There's nothing at all wrong with the occasional crack-up (and sometimes cracking up adds to the comedy) but good god Jimmy, keep it together.  Fallon seemed to treat his stint like SNL fantasy camp --- Fallon is very obviously a guy who loves SNL and was completely appreciative of his time on the show, but it's like he was so blown away by being a cast member that he forgot to actually be a cast member.  If you ever wanted to see what Jimmy Fallon could've been had he only been slightly more on the ball, just look at Bill Hader.

So, after expending all those words on people who didn't make the list, here are far fewer words on THE ACTUAL LIST.  Enjoy!