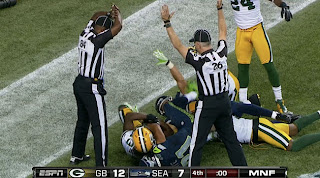 You knew that sooner or later, these replacement NFL referees would make a horrible call that would decide a game, and it's just my bad luck that it happened against the Packers.  That picture says it all --- one ref signalling a touchdown, the other signalling an incomplete pass, and it's all just the perfect image of the incompetence that has marred the first three weeks of the NFL season.

You'll notice that the ref who actually has a clear view of the ball is the one who's saying the pass (the last-second hail mary on the last play of the game, mind you) isn't good, while the ref signalling a touchdown is the one whose view is obscured by the Seattle receiver.  For whatever reason, the touchdown ref's call was the one that was made official on the field, and thus the replay booth couldn't overturn it.  The rule is that calls can only be overturned with 'undisputed' visual evidence, and since it was only 97% obvious that the Green Bay defender had possession of the ball, that little sliver of doubt (the tie goes to the receiver in cases of "simultaneous possession") was all it took for the touchdown call to stand and for the Seahawks to win the game.

This game was probably doomed for the Packers from the get-go.  I was watching it with a group of friends over at a buddy's place, and heard about how my pal Malcolm had broken a mirror while recently helping my friend Matt move, and thus both had since had a run of bad luck.  Matt's a Packers fan and we were watching the game at Malcolm's apartment.  Uh oh.

Secondly, my friend Aron was also there.  The last time Aron and I saw a Packers game together, it was at Real Sports last December as the Packers lost their unbeaten record in a dismal loss to the Chiefs.  To make matters worse, Mal's apartment is literally in the same building as Real Sports.

And finally, the fact that the Packers were playing the Seahawks was also a big red flag.  It wasn't just that the Shawks are a very tough team to face in their home stadium, it was also that my friend Ian had literally just that week chosen Seattle as his new favourite team.  You see, Ian had never grown up with an NFL team and thus decided it was time to follow someone.  He had about a dozen of us actually grade each team on various criteria (Leadership, Uniforms, Tradition, Bandwagon/Underdog Aspect, etc.) and then tally up the points to see who the best choice was.  The winner was Seattle, and really, I was one of the biggest Seahawks proponents.  As I've written before, if I hadn't been a Packers fan, I'd probably have been a Seahawks fan just because I like the city, the stadium, the general inoffensiveness of the team and because I've always wanted to root for a Seattle franchise due to my longtime love of 'Frasier.'  So since Ian didn't end up rooting for another NFC North team, I was all on board with his choice.

In hindsight, what an awful mistake.  While there wasn't much good for Green Bay in this game, Matt was punctuating every big Packers play with his 'packing dance,' which was literally him miming a guy packing boxes into the back of a truck.  So, when Seattle did something good, Ian had no choice to counter with his own dance, namely flapping his arms like a seahawk.  On that bullshit game-ending play, Ian added to his celebration by adding an ear-splitting cry of "CAW! CAW! CAW!" to his arm waving.  While hilarious, it was also infuriating.  That isn't what a seahawk sounds like!  What the hell is a seahawk, anyway?  Sounds made up.

Literally every NFL game this season has been subject to a litany of bad calls by these scab referees.  A comment was made tonight that it's bizarre that a league that has always been obsessed with every detail (be it the length of uniforms to several layers of replay corrections) would just stand by and let their games fall into chaos just over the fact that they won't pay the regular referees a few million extra dollars.  The problem is, however, the NFL's obsessions may not have been with details, but simply with control.  Since the refs won't allow themselves to be controlled, the NFL will just lock them out and then wait as long as it takes to reach a settlement, quality and fairness of its games be damned.  Some men just want to watch the world burn, Master Wayne.

By this point, all bets are off.  The fake referees might call anything at this point.  A defence could line up 14 guys and the refs probably miss it.  Linemen could start delivering Ric Flair-style groin shots to opposing players behind the referees' backs and none would be the wiser.  A replay booth review could take 15 minutes before it's revealed that the official is actually just watching an episode of Big Bang Theory under the hood.  The only thing more absurd than these scenarios and grown men believing in curses affecting football games is that this refereeing situation has reached such rock-bottom levels in only three weeks.
Posted by Question Mark at 1:41 AM

I'm a Packers fan too, and even if I weren't I could go on and on about how these referees are incompetent. Not only that! But the replay totally shows the ball in M.D.Jennings hands. Just a travesty. That's why even Packer haters were on Facebook and Twitter and Google Plus just saying how bad the officiating was and that the Packers were robbed.