TV Year In Review, Part One

The first part of my recap of the 2008-2009 TV season will focus on the shows that have already wrapped for the year. Hell, a couple of them have been done for six months and their next seasons will be starting in August. But still, one cannot quibble with the 'year' part of 'year in review,' so here we are. 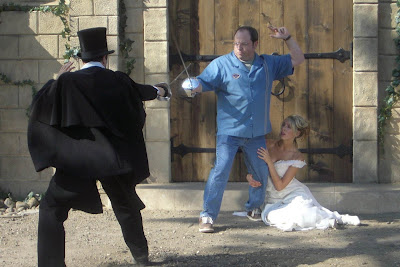 CORNER GAS
So it's six seasons and out for Corner Gas, by all accounts the most successful and arguably the funniest Canadian sitcom of all time. CG was one of those rare shows that found its footing early and kept on a consistent level for its entire run. I'm hard-pressed to think of any truly great CG episodes, but I definitely can't think of any bad ones. It stayed at a solid B/B+ plateau for virtually all six years, or at least the last five years once they got past the 'Brent has a crush on Lacey' aspect of the first season and decided to just focus on comedy. I look forward to CG reruns running on Canadian cable channels from now until doomsday. 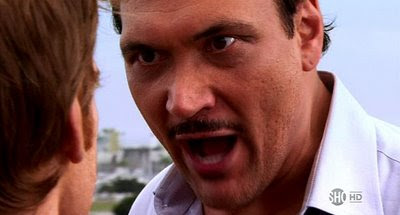 DEXTER
I'm getting just slightly worried about 'Dexter.' The show is at its best when Dexter is a sociopathic monster. The fact that he's developed actual feelings for Rita and her kids just seems wrong, and while you might argue that blah blah blah it shows personal growth, who cares? He's not supposed to show growth. He's a lunatic serial killer. That's the whole point of the show. I'm also not crazy about the lazy romantic pairings that all cropped up by the season finale. Deb, Angel and even perverted ol' Vince Masuka all ended up in relationships? Hell, it was even implied that Dexter's dead foster father was up in heaven banging the spirit of Dexter's dead mother. This is supposed to be a crime thriller, not the Love Boat. The season's overall storyline was pretty decent, if carried entirely by the fact that Jimmy Smits was an awesome nemesis. His final demise should've been the season finale, rather than the lame one we actually saw that featured Dexter wiping out the Skinner is comically simple fashion. Overall thumbs are still up, but cracks are starting to show in the premise. 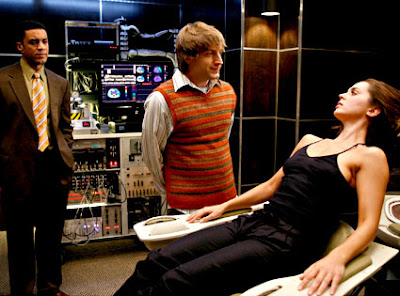 DOLLHOUSE
I really, really, really hope that the Fox network decides to be cool (for once) and brings 'Dollhouse' back for a second season. The series started out slowly, and creator Joss Whedon even said that things didn't really kick into gear until the sixth episode. At the time I thought this was an odd thing to publicly state --- "Hey everyone, don't bother watching for five weeks! You won't miss much!" --- but it was true. The first five shows are there basically just to establish the premise and characters, and only then did things really kick into high gear as the rest of the season explored the nature of the Dollhouse itself, rather than just generic assignments-of-the-week for Echo. The concept of the series and the motives of the non-Doll characters have been so fleshed out that there's easily enough juice here to last two or three more seasons.

The only weak link in the chain is Eliza Dushku, which is kind of ironic given how the basic concept for the series was apparently her idea. She just isn't enough of an actress to pull off the range required to be a 'Doll.' Compare her to Dichen Lachman or Enver Gjokaj (Sierra and Victor). Those two seem like completely different people in their different imprints, with the crescendo being Gjokaj's dead-on impression of fellow cast member Reed Diamond when Victor is imprinted with Dominic's mind. Echo's different imprints, however, are all just varying degrees of Dushku. The bright side is that Whedon seems to recognize this, as while Echo was still the central character over the final half of the seasons, the supporting cast really carried much more of the weight. Everyone else in the supporting cast, by the way, was pretty much awesome, from Lachman and Gjokaj to Tahmoh Penikett to Fran Kranz to Harry Lennix to Olivia "I'm The Only One In This Cast With A Normal Name" Williams. I'm giving special mention to Amy Acker as Dr. Saunders, since I'm convinced that she should've been cast as Echo and then 'Dollhouse' would've been playing at a higher level from day one. Amy Acker is fantastic. Whedon should've listened to Dushku's idea for the show, and then pressed a button that opened a trap door and dropped her down a laundry chute. 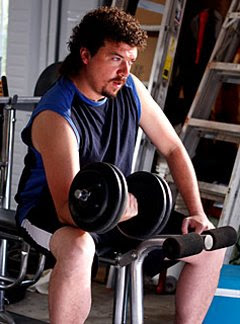 EASTBOUND & DOWN
This message is directed solely at my group of friends. Matt, Andrew, Eric, Trevor, Dave, Scott...how the fuck did we not come up with the idea of a show about a John Rocker clone becoming a high school gym teacher? We should be ashamed of ourselves. Talk about an idea that was right in our wheelhouse. E&D will be coming back for a second season, which is great news since six episodes was barely enough to scratch the surface of the comic potential that is Kenny Powers. It's weird; after the pilot (which was only one of the best pilots I've ever seen of any series), the show took an oddly dramatic turn in its middle two episodes, highlighting just how low Kenny had sunk, before building up the funny again with the amazing 'Kenny pitches to his old rival in the Ashley Schaffer BMW parking lot" episode. Theoretically, we've worked through the pathos now and S2 can just be straight-up hilarity. The best thing about Kenny Powers is that Danny McBride plays him as just a total douchebag. Even in his 'caring' moment, he's still the biggest piece of white trash you've ever seen. It's awesome. Hopefully we'll get at least ten episodes of E&D next season. 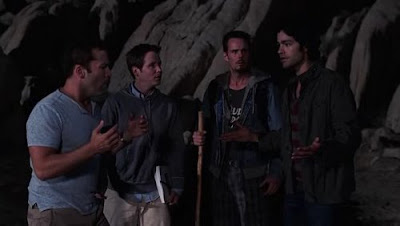 ENTOURAGE
I'm done with this show. At one point I found it to be quirky and enjoyable, and Jeremy Piven, Rex Lee and Kevin Dillon did a good job of carrying it on their backs for four seasons. But my god, has this thing ever run off the rails. Watching the past season of 'Entourage' was an epic chore. There was literally zero dramatic conflict in any of the storylines. At least with formulaic shows like House or CSI, you can appreciate how the characters have to use their brains to solve the problems. In Entourage, the characters just continually fall ass-backwards into a solution that bails them out. The deus ex machina has been used so many times that the gears lowering the god (or, more specifically, the studio exec or director who LOVES Vince and would love to offer him a major role or paycheque) are starting to squeak. This show has no balls. Also, in a mockery of statistical analysis, Connolly and Grenier are somehow managing to become even worse actors as the series progresses. This show is going nowhere, and I think I'll just get out of the rut now rather than waste my time watching a sixth season. 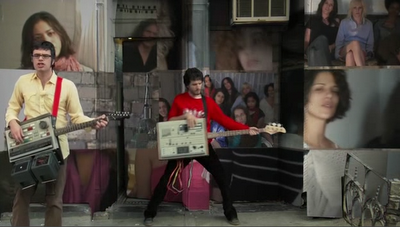 FLIGHT OF THE CONCHORDS
The word on the street is that Bret and Jemaine aren't terribly keen on a third season of FOTC since they're worried that either the quality of the episodes will start to suffer, or that they won't be able to come up with another batch of good songs to continue the musical aspect of the show. I can see their point, since the song quality even dipped a bit this season, but the comedy remains as good as ever. FOTC was probably the funniest show on TV last season that didn't involve Tina Fey muppet-walking down a hallway. Just about every single joke or concept worked, from the New Zealand prime minister's visit to Bret's gang to everything Murray and Mel said or did. I submit that the "Jemaine dates an Australian" episode might be the best one of the series, from both a comic and a musical standpoint. The songs were funny, the videos for said songs (shot by Michel Gondry) were both excellent, and FOTC exaggerating every single New Zealand and Aussie stereotype will never stop being hilarious. 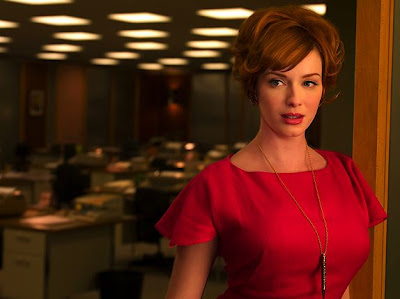 MAD MEN
What's more to be said about Mad Men? If it's not the best show on TV, it's close. What I loved about the second season was that --- sort of like how the first half of Dollhouse's season was meant as just a build-up to establish characters and situations before really getting into the good stuff --- it almost seemed like the first season of Mad Men (as great as it was itself) served as a similar backdrop for the even better second year. The two-year chronological gap that will apparently exist between each season is a great gimmick, as it gives time for all sorts of new conflicts to build up and old ones to evolve off-screen, and then we see the fallout in the next season's episodes. For example, rather than just having an episode dealing with what Peggy did with her baby, having oblique hints dropped over the first seven episodes led to a much more satisfying payoff when we actually did get the full story. All of the major characters advanced in surprising ways; Don by accepting his past life as Dick Whitman, Peggy with her new copywriting position, Pete surprising turning from one-note slimy douchebag to being perhaps the most interesting character on the show and, to my surprise, January Jones (the weak link of S1, in my opinion) really elevating her performance and making me care about Betty Draper's evolution. I literally can't wait to see what's in store for Sterling Cooper in 1964. The odds of perpetual wannabe Paul showing up to work in a Beatles haircut: about 3-to-1. 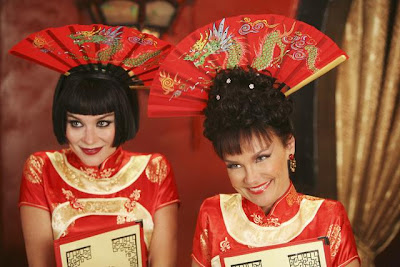 PUSHING DAISIES
Sigh. I've made my peace with PD being canceled and gone forever, killed by a network that couldn't promote its way out of a paper bag (except when it comes to spoiling key scenes in LOST commercials or telling you when 'Dancing With The Stars' is going to be on). I just wish Bryan Fuller had taken the show to cable to begin with. The lure of a network show must be enticing, but had Fuller gone to Showtime, AMC, HBO, etc. instead of ABC, then I have little doubt I'd be sitting here writing about how psyched I was about the upcoming third season, rather than cursing ABC's name. On the bright side, the few remaining PD episodes will be aired in June, so we won't have to wait to see them on the DVD and the series can at least come to some sort of hopefully satisfying conclusion.
Posted by Question Mark at 3:25 PM

The funniest Canadian sitcom of all time is The Newsroom.