The end screen of the Three Stooges game for the classic NES is a real head-scratcher. 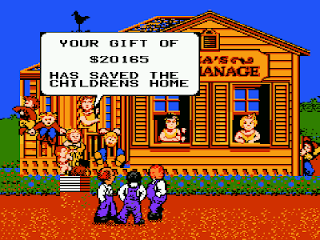 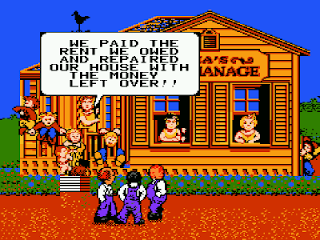 The plot of the game is that the Stooges had to earn $5000 through various jobs to keep the orphange from being torn down. Thus, in this case, they've generated a cool $15,165 in profit.  Even factoring in Depression-era economics, fifteen grand seems insufficient to fund three different couples as they begin their lives together.  Nowadays, $15K would barely cover a moderate wedding, though obviously we can assume that the brides would be happy with a much more modest ceremony.  They're marrying the Three Stooges, for god's sake, so they're clearly not picky. 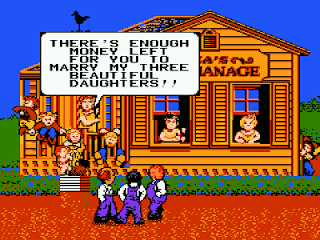 Onto motive.  Now, I haven't actually played the Stooges game myself, so I have no idea if the romance between the Stooges and the orphanage owner's daughters is at all established beforehand.  I'd have to guess probably not, given that 80's Nintendo games weren't exactly known for their in-depth backstories.  So what we have here is this mother, so grateful over her orphanage being saved, that she decides to pawn her own children off on these three (let's be real) overt morons.  To her, it seems like a basic one-to-one transaction.  She is impressed by the valour of these three young (?) men, and she also has three single, attractive (?) daughters.  Her thought process here was similar to that of the man who first invented the banana milkshake. 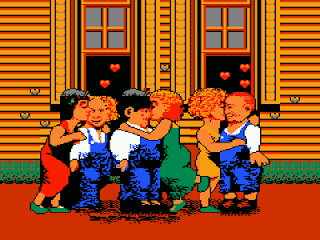 To be fair, the girls seem into it?  They're smooching up a storm with the Stooges, after all.  So even if this arranged marriage scenario is problematic at best, maybe you can just write it off as the heart wanting want the heart wants.  Not to sound pessimistic, but you have to believe reality will soon set in for these poor women.  Can you imagine how awful it would be to be married to one of the Three Stooges?  You'd never get a moment's privacy.  The other two would around 24-7, causing mischief, breaking up intimate moments with pie fights, etc.


In summation, if your orphanage is saved thanks to a fundraising effort from three idiots, maybe just give them a nice card rather than accepting a $5065 dowry for one of your children.
Posted by Question Mark at 2:26 PM