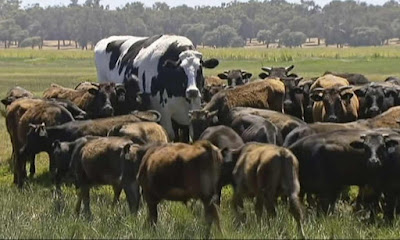 I mean, it is a genuinely big cow.  When I got wind of this enormous Australian cow becoming a viral sensation, I clicked that link hoping to be wowed, and by god, was I not disappointed.  Consider these expectations met!

Is it wrong that I kind of want to eat the cow?  Sure sure, the cow may literally be too big to be processed into food, but keep in mind, I love hamburgers.  Love them to a degree greater than Wimpy and Jughead* combined.  What better say to seal my reputation as the ultimate burger aficionado than to be able to brag that you enjoyed a hamburger made from the largest cow in existence?  Yes, this entire paragraph makes me sound like the villain in the animated film that is inevitably being written about this cow as we speak.  They'll have to come up with a more family-friendly title than "Knickers," of course.  I nominate "Mark," since I'll take the pop culture hit** of being associated with a gigantic cow for all eternity as long as I get first dibs on a Knickersburger.  In a related story, the New York Knickersburgers is a great name for a fantasy basketball team.

* = I've never seen the new Riverdale show, though I've heard it's turned the classic Archie framework into both a steamy teen drama and an ongoing crime noir, which is hilarious on both counts.  I truly hope, however, that the new version of Jughead still scarfs down burgers like they're going out of style.

** = I wonder when certain names will again be safe for children, so they'll be spared mockery from classmates.  People named 'Casper' probably thought they were just about out of the woods by 1995, but noooo, that damn revival set them back another 20 years.
Posted by Question Mark at 9:33 PM