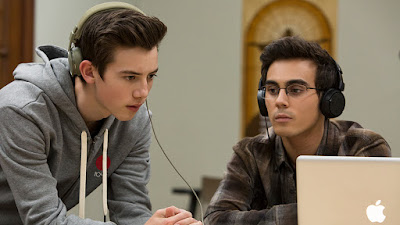 So after naming “American Vandal” as my best show of 2018, I’m now having to write a post about how it’s been canceled?  What the hell, Netflix?!  Between this and Luke Cage getting the axe after its* best season, it’s like they’re trying to trying to punch me in the stomach.

* = I originally wrote “his,” as if Luke Cage was an actual person responsible writing and directing a show about himself.  Actually, a more comedic, Garry Shandling-ish semi-mockumentary about a Marvel hero would be a great idea.  Launch this for Wonder Man, please!

Now, I’m pretty sure American Vandal will catch on with another network, since the positive buzz is just too big to ignore.  Netflix canceling the show in the first place is troubling, however, since it would imply that this instant masterpiece didn’t catch onto a particularly big audience.  I guess there could be some behind-the-scenes studio reasoning behind the decision (i.e. why Luke Cage and Iron Fist were canceled), though the Occam’s Razor answer is probably that American Vandal didn’t draw enough eyeballs.

How depressing.  American Vandal is such a blast on so many levels that it is legitimately one of the best shows I think I’ve ever seen, though two seasons.  All at once, it is…

— a pitch-perfect spoof of criminal documentaries.  Much has been made of the legendary scene in the first season when they do a computer-animated re-enactment of an alleged handjob, and with good cause.  I think that scene was in the second or third episode, and it is almost universally hailed as the moment when everyone realized they were watching something special.  (Uh, the show, not the CGI handie.)
— a legitimately engrossing mystery unto itself.  It’s the kind of show where, after the second-last episode of the second season, I took a ten-minute break to try and figure everything out.  This may have involved taking some actual notes.  Needless to say, my wild guess ended up being so completely off-target that it frankly ruined my dream of ever becoming a Sherlock Holmes-style detective on retainer at Scotland Yard.  American Vandal’s mysteries are so wonderfully revealed in a way that doesn’t cheat the viewer whatsoever, and make total sense with everything we’ve seen beforehand.  I should also note that, technically, the first season doesn’t *officially* provide the solution to the mystery, though I think we can infer that the theory presented is true.  I won’t say anything else since I wouldn’t dream of spoiling any details.
— an insightful look into modern teenage culture, particularly in how social media and the internet impact literally everything kids do nowadays.  It would be one thing if the show was just a total spoof, and that would make it great enough simply on that level alone.  But the added tragic tinge that underpins these stories really elevates things to a fabulous degree.
— one of the funniest shows on television.

It does all four of these things with incredible aplomb.  The level of detail that goes into this show is amazing; virtually any freeze-frame of any Twitter feed or TV screen used in a scene reveals lots of hidden jokes.

“Premature Theories” (the fifth episode of S1) is one of my single-favourite TV episodes in a long time, and a great example of American Vandal firing on every level.  The episode features Sam and Peter breaking down the events of a big high school party using collected video and images from various social media feeds, and it is completely fascinating from start to finish.  The result is a dozen little details, some hilarious character beats, some clues about the mystery (or, both the main case and a few other side mysteries that crop up along the way), and an absolutely brilliant way to portray a modern detective show.  This isn’t Sherlock going to his mind palace, or the CSI team finding some obscure clue via forensic analysis — these are details all publicly shared by the “suspects” and it’s up to the clever amateur investigators (Peter and Sam in the narrative, but really all of us watching at home) to piece everything together.

This show absolutely absolutely needs to find a new home, and hopefully some network or streaming outlet will step up to provide the third season that any fan of quality television needs.
Posted by Question Mark at 11:24 PM