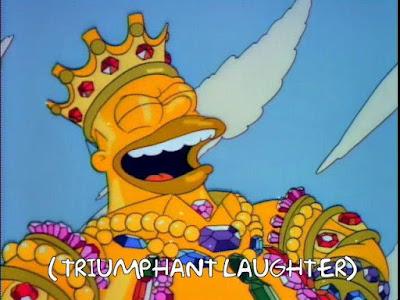 Some years ago, I was flying back from Seattle with my buddy Trev when our United Airlines plane encountered a slight delay.  We had a stopover in Chicago and, upon landing at O'Haire, we couldn't actually leave the plane for about 20 minutes since the plane couldn't find an open gate.  My guess is that a herd of cattle probably wandered onto the tarmac and got in the way, that makes sense.  (Cows are always causing havoc in Chicago.)

Anyway, this apparently wasn't the first time that Trevor has been held up by United.  He proceeded to tell me about how a delay on another recent trip had prevented him from making his connecting flight, which also led to him losing his luggage.  All of these problems were met by the United staff with a veritable shrug, though it seemed like the connecting flight could've been asked to hold on for the (several) passengers waiting to get onboard.  Not like any other flights were leaving for London, Ontario that day, that's for sure.

The upshot was that Trevor was bemoaning the fact that United was screwing him again, and noted "there was precedent."  To which I replied…

"I guess you could say it was the Precedent of the United Lates."

Trevor just responded with a slight eyeroll.  COME ON.  This was some first-class punnery right here.  I had half a mind to call the Wordplay Hall Of Fame.  I mean, man, that's some great on-the-spot improv, and really, it even had a secondary meaning.  After all, we were in Chicago, and the actual President of the United States at the time was from Chicago!  Hidden depths!  This pun had more layers than an Arrested Development season (one of the good ones).

Since I demand adulation for such a great pun, I'm re-telling the story here.  Don't sit on your hands like Trevor, a.k.a. No Reaction McGee.
Posted by Question Mark at 1:17 AM