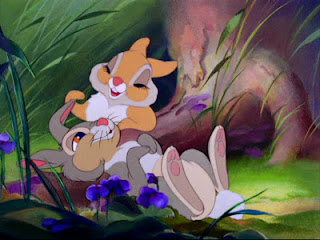 There are tonal shifts, there are abrupt tonal shifts, and then there’s the “twitterpated” sequence in Bambi.  The iconic and heartbreaking scene of Bambi’s mother’s death is admittedly hard to follow up on in any respect, so the filmmakers just turned into the skid by going immediately from that scene to….Bambi, Thumper, and Flower now suddenly teenage bros in the thrones of hormones.  Far me it for me to suggest that a 70-minute movie should’ve had an intermission, but maybe this would’ve been a good point for the film to go to a shot of Walt Disney sitting behind a desk, singing “Let’s All Go To The Lobby.”

Obviously you’re going to read things differently in 2018 than in 1942, but man, this scene has gone from comic interlude to unintentionally comic pretty hard.  I mean, I guess since Bambi, Thumper, and Flower apparently hadn’t seen each other in years, their near-immediate ditching of the others once they find their female counterparts is understandable, but man, it comes off as cold.  The internet, letting me down as always, couldn’t even provide a GIF of that image of Flower popping up from the flowerbed to dismiss his pals with a laugh and a “whatcha gonna do?” shrug.

After Flower comes Thumper, and, let’s see how to put this.  He meets the female bunny and then immediately starts, uh, “thumping.”  Nothing euphemistic about this, folks.  For pete’s sake, Thumper even falls asleep afterwards.  Disney couldn't have hit us over the head any more unless the movie had actually stopped at that point for a Kleenex commercial.

And finally, here's the star of the show, Bambi himself. First of all, the movie omits another major part of puberty, the point in life when Bambi (in the tradition of guys who went through the first part of their lives known as Mikey, Ricky, Matty, Jordy, etc.) must have demanded that his name be shortened to sound more mature. In this case, he'd just insist that Thumper and Flower start referring to him only as 'Bam.' Maybe it was a deleted scene.

Anyway, Bambi meets his fawn in the woods and they go jumping around on clouds in another subtle metaphor.  All is well and good until another buck shows up to make a play for the fawn, and Bambi just goes hogwild (deerwild?) and throws down on this dude.  The movie suddenly morphs into Mortal Kombat, and Bambi's fatality is to push this other buck off of a cliff to his death.  Good lord, that escalated quickly!  Take it down a notch, Bambi! Just take a more passive-aggressive approach, like 'accidentally' spilling water on the guy's pants or making subtle jabs at his job.  Neither of these would've worked in this particular case (the other buck wasn't wearing pants, nor was he in O.R. scrubs), but even still, there must be an easier path to Feline’s heart than straight-up murder.  On the other hand, she seems to be into it?  Was there a Bambi 2, where Bam and “Fel” go on a Bonnie & Clyde-esque crime spree around the forest?  The comparisons between Thumper and Michael J. Pollard are hard to miss.

So, to sum up, Disney views puberty as being a time when you abandon your friends, start virtually pleasuring yourself in the woods, and being driven to jealous murder.  If the movie had worked in, say, a squirrel dealing with acne, that would've covered it.
Posted by Question Mark at 6:51 AM