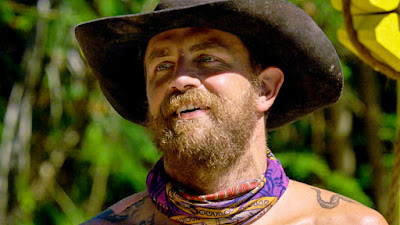 Be warned, this is going to be another “Mark rants about the current state of Survivor” post.  While the 35th season (the lazily-themed Heroes vs. Healers vs. Hustlers) made some interesting casting choices and did a better job than most recent seasons in establishing some unique personalities within its cast, this was yet another series undone by the producers believing that BIG MOVES and BLINDSIDES and BUILDING YOUR SURVIVOR RESUME are the factors that make their show popular, rather than those personalities.  Ben Driebergen’s story of victory encapsulates this entire issue with the show.

How He Won: Idols and an out-of-nowhere final four twist.  Not to diminish the rest of Ben’s game, which I’ll cover later, but this is the clearest case in history of a Survivor win that simply couldn’t have happened in past seasons.  Forget about the idols, even — Ben literally couldn’t have won any other season than S35 since no other series eliminated the vote entirely in the final four and turned it into a fire-making challenge.

Since I’m someone who’d still prefer to see Survivor revert back to a final two, you can correctly guess that I hate this new F4 twist.  In any other season, Ben is easily voted out after losing the final immunity challenge.  Now, he not only got a lifeline, he had the game clinched the moment the producers decided to implement this twist; either he wins the final immunity and makes the F3 that way, or he easily beats any of Chrissy, Ryan, or Devon in making a fire.  (I’m not 100% sure Ben would’ve beaten Devon in a final vote, but I suspect he had enough support on his side.)  I don’t buy for a minute Jeff Probst’s spiel about how now the players can “control their own fate when it comes to reaching the final tribal council” — what the hell else were they doing the previous five weeks?!  If you’ve played the game poorly enough that you’re dead meat in the final four vote, you don’t deserve that last chance.

In fact, anyone who plays so poorly that he needs three straight idol plays to save himself probably also doesn’t deserve a last chance.  After S34 was ruined by an overload of idols and advantages, S35 was unfortunately more of the same.  At first it seemed like the show had wised up in the sense that some of the idols and advantages had expiry dates (i.e. they were only good for that night’s tribal council), but in the end, it just became another edition of Survivor: Scavenger Hunt, where the person with the most toys wins.  Fair play to Ben for finding the idols, and particularly keeping them secret, but it doesn’t make for a very satisfying victory.

Skillset: That secrecy really served Ben well since his fellow players couldn’t help but spill the beans about every idol and advantage that came their way.  This is where being a superfan and wanting to make sure you get credit on your “Survivor resume” can bite the likes of Chrissy or Ryan in the ass, whereas Ben deployed simply common sense and kept his idols to himself.  He also deserves credit for his wonderful “spy” performance within the Chrissy/Ryan/JP alliance, which was easily the season’s highlight.  That was something I’d never seen on the show before,* and it was a simple yet ingenious move.  Credit to Devon for thinking the idea up, and credit to Ben for executing the deception so well.

* = Shambo pulled a variation of this on her old Galu tribemates back in S19, though Shambo was clearly on the bottom of the Galu alliance and they suspected she had turned anyway.

Ben generally came across as a loyal, honest guy that you’d want to be in an alliance with, even if his paranoia eventually burned bridges in the later stages of the game.  It is very true that Ben had a pretty curt personality with people he didn’t like, though as always in Survivor, it’s okay if people don’t like you much as long as you’re in the F3 with two people the jury likes even less.  In the big picture, everyone respected Ben’s military service, and admired him for using Survivor as a platform to let veterans know that it was okay to be open with PTSD and other issues.  That carried a lot more weight than Chrissy and Ryan’s too-rehearsed jury speeches that they’d been composing in their heads for years.

Could He Do It Again?: As mentioned earlier, Ben could only have won S35, given the unique twist that allowed him to escape certain doom at the final four.  Since this twist will apparently (ugh) be an ongoing feature of Survivor for the foreseeable future, I guess he could do it again?  You’d think future casts would know this guy was an idol magnet and would do a much better job of shadowing him at all hours, so really, I don’t have much faith in Ben performing too well in a theoretical repeat visit.
Posted by Question Mark at 12:38 AM