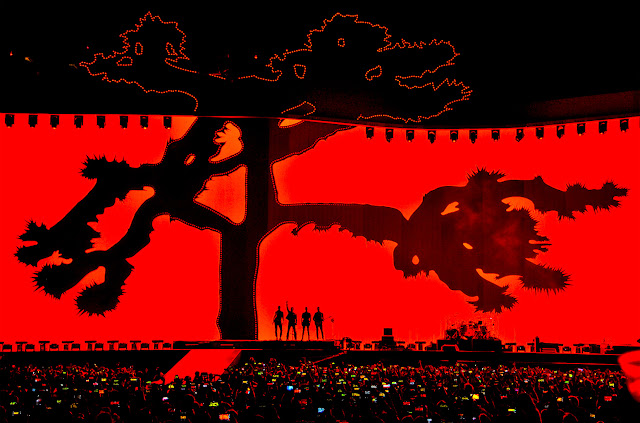 I was only five years old when The Joshua Tree was released, and still roughly a decade away from U2 fandom.  So, it was fun to see the band revisit their most popular album 30 years after its release by doing two things the band never does — tour an old album rather than a new release, and play an entire album from start to finish.  Several bands have been doing the ‘play the entire record’ gimmick in recent years, and I’ve actually seen this in person myself, when Pearl Jam made the odd decision to play Binaural front-to-back when I saw them last year.  It’s actually quite rare that U2 even plays an entire album at ANY point in their live history.  Before this tour, Boy was the only U2 album that had ever had all of its tracks played in full during a live show.

So the stage was set last night in Toronto.  The players!

* Your humble narrator, seeing his astonishing eighth U2 concert!

* My buddy Trev, seeing his fifth U2 concert (all with me), despite the fact that he isn’t really that huge a fan of the band!  What a true concert compadre!  He keeps going despite the fact that he has never heard All I Want Is You, his favourite U2 song, played during any of these shows.  Wait, maybe that’s WHY he keeps going.  Once they finally play it when he’s in attendance, he’ll just leave the building immediately.

* My buddy Eric, seeing his second U2 concert!  Eric joined Trev and I for a Vertigo Tour show in 2005 and really enjoyed it despite a near-total lack of knowledge about the band and their music.  (Sample question after the show: “I liked that Vertigo song, is that one of their hits?”)  Eric was supposed to join us again in 2009 but broke his leg playing rec league baseball two weeks before the concert, and then in 2015, someone (uh, named Clark, or Park or something) was only able to get single tickets to two Innocence & Experience shows.  So Eric was making his triumphant return to seeing U2 in concert, 12 years later, and this time actually knew five or six of the numbers on the setlist.  Progress!

* Joanne, seeing her second U2 concert!  The little sister I never had, to the point where I was actually a bridesmaid (you read that right) at her wedding.  This was also the first time Jo and I had seen a U2 show together, as *someone* (that same Clark/Park guy) got her tickets to a concert in 2009 but she couldn’t attend due to a last-minute pHd crunch.  Boo to higher learning!

* Greg, seeing his very first U2 concert!  Greg is like a brother, except for the fact that he’s married to Joanne, so having a brother and sister marry each other is pretty weird.  Greg rated his first U2 experience as “really good,” so yet another satisfied customer.

* Marianne, seeing her third U2 concert!  Marianne is Joanne’s actual sister, which makes her my step-little sister?  Though Marianne is older than me, so step-bigger sister?  This analogy is falling apart.  Anyway, during the concert, I learned that the combination of Joanne and Marianne screaming at the same time creates a noise so piercing that I honestly thought there was a feedback issue in the stadium’s sound system.  Greg was next to them and now may be deaf in his left ear.

We took in the show from the upper levels of Rogers Centre on a hot and muggy day in Toronto, and I can’t tell you how relieved we were when the roof began to open up about 40 minutes before showtime.  Rain earlier in the day gave way to clear skies at night, so obviously someone in stadium services or with the band themselves made the correct call to let the fans enjoy U2 on a lovely summer’s evening.

The stage was pretty bare-bones, reflecting their old 1987 stage, just souped-up for modern times by having the big backdrop be a video screen rather than….well, just a backdrop.  There was a catwalk in the shape of a Joshua tree that stretched out into the crowd, and U2 played their first four songs of the night on that B-stage before moving back onto the main stage to kick off the full-album segment.  There was also a staple Joshua Tree image on the screen that, weirdly, wasn’t sized properly.  The top third was above the actual screen, so either the tree should’ve been properly done to scale or the screen should’ve just been larger.  Maybe it was a metaphor for the show, as you’ll see later.

*Sunday Bloody Sunday….an unconventional opener choice but a strong one.  Larry Mullen came out on stage by himself to applause and started playing the song’s legendary drum intro, followed by Edge strolling out playing the guitar riff, then Bono entering with the opening vocal, and then Adam Clayton trailing behind adding in the bass.  Great gimmick to kick off a show!
*New Year’s Day
*Bad….with a large portion of “Suzanne,” as a tribute to Leonard Cohen
*Pride
*Where The Streets Have No Name
*I Still Haven’t Found What I’m Looking For
*With Or Without You
*Bullet The Blue Sky
*Running To Stand Still
*Red Hill Mining Town….this was the Joshua Tree track that U2 had never played live even once prior to this tour.  Ironically, the band originally had it earmarked as their first single from the album (!) except Bono’s voice couldn’t take singing it on a nightly basis.  This song faded into obscurity while WOWY ended up as one of U2’s most iconic hits.  Wacky!
*In God’s Country
*Trip Through Your Wires
*One Tree Hill
*Exit….one of the real highlights of the concert, just an absolute fireball of an energetic song.  Bono even ditched the glasses and donned his old Joshua Tree hat, to really recapture the 1987 vibe.
*Mothers Of The Disappeared
(((encore break)))
*Miss Sarajevo
*Beautiful Day….rainbow imagery on the screen and slightly reworked with a larger theme of inclusiveness in a nod to both Canada as a nation of acceptance and for Toronto’s Pride weekend
*Elevation
*Vertigo
*Ultraviolet….rebranded for this tour as an ode to influential women throughout history, and also Lena Dunham for some reason.
*One
*I Will Follow

U2 had been playing a new track (The Little Things That Give You Away) at some of the earlier shows on this tour as, interestingly, the closing number.  Sort of a coming attraction for the band’s “upcoming” album.  I use the quote marks since who the hell knows when U2 will actually release this, given their rep for delaying and/or shelving records entirely, BUT the new Songs Of Experience disc is allegedly coming in December.

Rather than the coming attraction of the new song, U2 has seemingly decided to make this a straight greatest-hits set.  It is probably a wise decision given the one flaw in this whole Joshua Tree tribute idea — nobody really knows the back half of the album.

Now, TJT is one of the best albums of all time, hands-down.  As a record, the tracklist flows very well.  In a live setting, however, there’s a problem since the album is so enormously front-loaded.  I mean, when you have arguably U2’s three biggest as the record’s first three tracks, then the next two best-known Joshua Tree songs fourth and fifth in the order, it leaves a pretty long stretch of lesser-known material right in the middle of the show.

The result was something I’d never seen before at a U2 concert: an extended dead period.  The crowd was standing and rabid for the first seven songs, all classics.  We stayed jazzed through BTBS, since how could you not.  Then, during Running To Stand Still, you could actually see the waves of people gradually starting to sit down around the stadium and by RHMT it was nothing but butts in seats.  That continued all the way through Miss Sarajevo* until Beautiful Day kicked in, and then you could see the masses getting back to their feet and staying there through the hit-strewn encore of high-energy songs.

* = I’d question the placement of another lesser-known song right after the Joshua Tree back half, though I’m not sure where else you can fit it into the setlist.  It certainly can’t be removed entirely, since as the song’s video footage indicated, U2 is making a point of highlighting the Syrian refugee crisis with this performance.

Don’t get me wrong, the JT back half is a strong bunch of songs and they were performed well, with Exit being a particular highlight.  It’s just that U2 left themselves little room for flexibility by committing themselves to play the entire record in order, when in a perfect world, they’d mix and match things to create a better flow for the evening.  When touring a new album, naturally the band would mix the new stuff in amongst the older stuff, not just play something like 5-6 new songs all in a row.  (The one exception was when they kicked off the old Zoo TV tour with something like eight Achtung Baby songs, but those songs all ruled, so it’s a push.)

Since the tour is almost half over, it’s probably too late to fix this issue.  The only solution I can see would be to play all 11 Joshua Tree songs, but not in the actual order.  Start with WTSHNN, then move into the faster-paced numbers and Still Haven’t Found, then go into the “heart of darkness” part of the set that U2 always likes in their concerts by putting Bullet and Exit back-to-back, following that up with RTSS or One Tree Hill for a bit of hope, then WOWY, then Mothers to end the album proper.  This creates a bit more natural flow and it spaces the big hits throughout the 11 tracks, rather than having them all kick off the set.

With the staid middle portion of the show in mind, it was a rare U2 show that wasn’t a total hit for me.  As such, I’d have to rank it no better than second-last of the eight concerts I’d seen.  (Last place is my first-ever U2 concert, a Toronto show during the Elevation Tour, which was still a great experience but it has paled in comparison to my other times seeing them.)  It was a great idea for a tour that maybe required a bit more planning, like that video screen that didn’t quite fit the entire tree.
Posted by Question Mark at 4:26 AM