Apparently today is #NationalSunglassesDay, which gives me an excuse for the laziest of all blogger activites, re-posting old material!  Here are two classics (your mileage may vary) from 2014....

If I ever got to meet a genie, all-knowing entity or some kind of deity, I obviously would stick to mostly deep questions (meaning of life, is there extraterrestrial life, etc.) and I wouldn't go all "Homer meets the Kwik-E-Mart president."  That said, if I got the opportunity for more than, say, a half-dozen questions, I'm pretty sure the last one on the list would be asking this all-knowing being whatever the hell happened to my giant fly sunglasses.

If you knew me between the years 1998-2007(ish), you probably saw me wearing these oversized jet-black sunglasses with those thick lens at least once.  If you didn't know me then, imagine the kind of glasses that either a very old woman or a Kardashian might wear.  (The picture at the top of the post is a pretty close visual approximation.)

Now, I cited old women and Kardashians, but my real inspiration for these shades was Bono.  My U2 fandom really took hold in 1997 and, upon becoming obsessed with the band, I took to wearing these sunglasses as a tribute to Bono's "Fly" character that he adopted for the ZooTV tour and really, for basically all of 1991-93.  I'm not going to lie, he probably pulled them off better than a prematurely-balding 17-year-old did, but that's just a matter of taste and opinion. 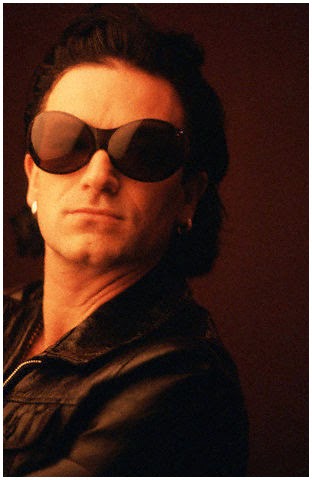 Now admittedly, I went a little overboard with these things in 1998-99.  I may or may not have (so, did) worn these things all the time at school, even during most classes.  This was when I learned a valuable lesson --- if you're a good student, high school teachers will get you get away with basically anything.  Even the hard-ass teachers who cracked down on anyone else for even wearing a hat in class could've seen me walk into the room with a live bird on my head and just gone, "meh, Mark hands in his stuff on time, whatever."  I wore these shades so often that, when running for student council that year, I used two giant bug-eye lenses as my campaign logo.  In a possibly-related story, I badly lost that election, hearing through the grapevine that I finished fourth out of four candidates.  On the one hand, my three opponents were arguably the three most popular kids in school.  On the other, "I wear sunglasses all the time!" isn't exactly a great campaign platform, so the electorate spoke wisely.

Anyway, I greatly dialed back the sunglass-wearing and from then on, I just wore these shades when (y'know) it was sunny out, like a normal person.  I got years of use out of those glasses and that's when the mystery deepens.

Between August-October 2007, I took a selfie wearing those shades and a toque* on my laptop camera.  I'm able to pinpoint those specific dates since the picture was taken at the place I was subletting in Toronto at the time.  After that timeframe, however, I have no idea what happened to my beloved fly shades.

* = the toque, I should add, was specifically bought because it resembles the tight-knit caps worn by the Edge.  I still have that toque to this day.  What's with me dressing like the members of U2?

It's very weird since, as noted, I still wore those things all the time, though I'd also branched out and had about three other pairs of (normal, non-enormous lensed) sunglasses that I kept in a rotation.  So it's possible that my fly shades just got lost in the shuffle of packing my stuff to head back to London in November 2007, or I still had them during the winter of 2007-08 and I lost them then, or perhaps one of my friends simply got sick to death of those stupid-looking glasses and stole them in a fit of pique.  OR, as is more likely, one of my fashionista friends stole them out of jealousy since they were just beyond stylish.  It's annoying to not have a specific date locked down as to when I last had the damn things, since it really widens my search parameters.  They could be in any part of southern Ontario that borders the 403, really.

In the years since, I've looked for other shades that can fill the giant, bug-lensed hole in my heart but it's no use.  I haven't found any that are just right.  Some have lenses that are too thin, or too properly circular as opposed to bugged out.  Some have earpieces that are also too thin.  The biggest problem, I've found, is that most earpieces have some kind of goofy design on them whereas I'm looking for just jet-black.  Now, I'm just dozens of you will read this post and surprise me with fly-style glasses for my next birthday but don't bother.  I'm very picky about the style I want.  I'll probably just look at your gift and throw it on the ground in a huff, a la Veruca Salt, since it's just not specifically what I want.

Yes, I realize the irony of wearing sunglasses in the first place to emulate Bono and now I still haven't found what I'm looking for.

If you have any information as to the whereabouts of my beloved sunglasses, call my 24-hour hotline at 555-MARKFLYSHADES.  I realize that this is longer than the usual amount of digits in a phone number, but I made a special deal with the phone company.  The president of Bell once lost a novelty t-shirt with a picture of a cartoon aardvark saying "Aardvark Always Pays Off!" and its loss haunts him to this very day, so my situation was met with a lot of sympathy within the telephone industry.

It never hurts to talk about one's problem.  It truly could've been an act of karma that, just a few months after I break down and write about my quixotic search for a pair of fly-esque sunglasses to match a pair I lost years ago, that my search finally came to an end.

The place: Canadian Tire.  Just mentioning the name fills me with a weird sense of nostalgic national pride, plus my nose is suddenly filled with the smell of rubber.  I went into my local CT in order to check out their watch inventory (my old watch met its end when I accidentally dropped it down a flight of stairs).  I'll take a small sidebar here to note that I'm in that weird middle ground between "not wanting to spend any significant money on a watch since they're strictly a utilitarian piece of equipment" and "having a watch whatsoever, since you can always check the time on your phone."  Ergo, my interest in Canadian Tire's wide array of watches for $20 or less.

Nothing caught my eye on this day, however, not to mention the fact that I was a bit cramped for time during my visit and (had I bought a watch) didn't have time for an obligatory trip to the jewelry store to get the battery installed.  What I did have time for, however, was the obligatory browse of the sunglass rack on the fleeting, off-chance that….

…OH MY GOOD LORD.  THEY EXIST.  The glasses had frames that weren't 'quite' as outlandishly large as I'd hoped, and the inside of the lens were actually a shade of metallic pink.  Still…large lenses, black tinted, and black plastic ear wraps that were just plain black without any goofy design on them.  This was the 95% solution, and frankly, who isn't satisfied with 95 percent?  The makers of Ivory soap?  Get over yourselves, people.  I'll take a ninety-five any day of the week.

So now I'm strutting around town with my fly sunglasses on, looking like the single coolest human being walking the face of the earth.  You've probably seen me around town --- my presence will be alerted by a slight breeze, and you'll turn your head and literally be struck backwards by the tornado of style that's coming your way.  "Holy smoke, does he even HAVE eyes?  I can't see them!  Whoaaa!", you'll excitedly yelp, high-fiving either your buddies or maybe some passersby if you happen to be a friendless degenerate.  Then you'll go home and write a post about seeing me on your blog, give it a tag called 'Brushes With Greatness,' hesitate for a moment since that tag sounds vaguely douchey, then shrug and do it anyways since my sunglasses were just that outstanding.

The moral of the story is to never ever give up hope, kids.  You never know when you'll find something wonderful to fill a seemingly un-fillable hole in your life.  I'd like to think that my old glasses, wherever they may be, are happy that I've moved on with a new eyemate.  My future is literally so bright, I have to wear these shades.
Posted by Question Mark at 2:28 PM