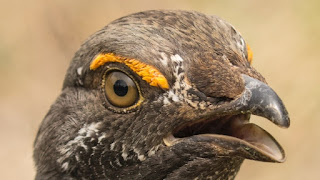 Stare into the eyes of evil.

When a new grade school opened up literally right behind my house when I was in fifth grade, it made for a very convenient commute…in theory.  Walking down the grassy, bushy hill down to the school in the valley, I was constantly attacked by a grouse that dove out of the bushes at me.  There was really only one well-worn path down through the brush, so I had no choice but to traverse that route (presumably near the grouse’s nest) and get jumped what seemed like every single day.

My friends always felt I was exaggerating or complaining, saying that a bird could never specifically target someone a la a Hitchcock movie.  And yet now, today, as per this CBC.ca article, VINDICATION!

I can only presume that this is the same grouse, 21 years later, still wreaking havoc.  After I graduated grade school, he moved onto newer targets in a country-wide reign of terror.  The other stories of the grouse’s destruction over the last two decades haven’t been reported due to a lack of survivors.
Posted by Question Mark at 4:30 PM