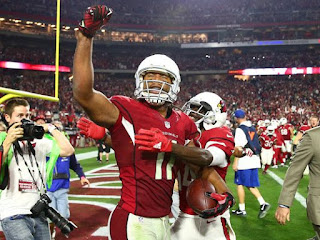 You know, it’s no secret that I wasn’t expecting much from the Packers in this game.  I didn’t even expect them to beat Washington last week, nor (realistically) did I really expect that much from the 2015-16 campaign the moment that Jordy Nelson blew out his knee in the preseason.  So really, just the fact that they got to the second round of the playoffs is awfully impressive.

That being said….ugggghhhhhhhhh.  Are you kidding me?  I would’ve much rather Green Bay just lost by 20 points and gotten the misery over with than suffer yet another excruciating overtime playoff loss.  And the way this one ended, my god, the roller-coaster.  Going from the literally unreal ecstasy of that improbable Hail Mary (the Packers’ second Hail Mary TD in two months!) to the idiocy of the non-flipping coin to the defense’s inexplicable decision to not double-cover LARRY BY GOD FITZGERALD….it was too much.  I was texting multiple friends throughout the game and my phone’s battery died just as overtime began.  By the time I got home and got it charged again, I had 4-5 messages wondering if I wasn’t responding to texts because I’d thrown my phone against a wall in anger, or perhaps if I’d simply spontaneously combusted.  (In either case, really, not sure why they’d be expecting a return text.)

The Hail Mary underlined just how winnable a game this seemed to be for Green Bay, since a few things were revealed about the Cardinals.  Firstly, Carson Palmer has had so little playoff exposure over his long career that I think people may have just assumed he’d be his usual self in the biggest games; with some of the off-target passes he threw on Saturday, that may well not be the case.  Secondly, losing the Honey Badger has thrown a much bigger wrench than anticipated into Arizona’s defense.  (Not that this mattered too much for the Packers, as once Randall Cobb got injured, their receiving corps was down to the practice squad and maybe a few guys from the stands.  Having Patrick Peterson cover James Jones was like using a rocket launcher on a mosquito.)  You can certainly argue that the Pack were lucky in the closing seconds, yet the Cardinals weren’t any less fortunate to manage their go-ahead touchdown on a lucky bounce.

Now, I realize I may not be the most impartial source on this given that my team has had back-to-back gut-punch overtime playoff losses on the first possession.  But really, NFL, why not adjust the rule so that both teams get a possession in overtime?  You’ve already gone halfway with the “game ends on a TD but not a field goal” adjustment, so why not so the whole nine yards?  The league tweaks its rules to help offense every season, yet when it comes to deciding games, they’re content to have a partial sudden-death system that allows teams (or star quarterbacks) to see their seasons end without ever getting a chance with the ball.  It makes zero sense.  It would be like if tennis decided tiebreakers by only giving one player a chance to serve.  It would be like if MLB decided extra innings by saying a game could end on a homer in the top of the 10th, but if a team only scored a regular run, it would go to the bottom of the 10th.  It would be like if the NFL ended overtime games with only one team getting a possession if they scored a TD….that’s right, this rule is so dumb that it’s its own absurd analogy!

Of course, the Packers may well have won that coin toss had it not been for the fact that the referee somehow managed to flip a coin without flipping it.  The Packers won the unflipped call, yet since the damn thing didn’t make even a single rotation in the air (how is this possible?), it had to be re-flipped and the Cardinals got possession.  Right then and there, you knew karma had turned back on Arizona’s side.  If there was ever a doubt that NFL referees don’t know what they’re doing, that about sums it up.  Who would’ve thought the refs in this State Farm ad wouldn’t be the most incompetent crew Aaron Rodgers would encounter this season?

Two big take-aways from this game…
* Green Bay needs to heavily invest in wide receivers this offseason.  Davonte Adams should be cut.  Jones should be cut.  If Cobb’s struggles this year weren’t due to injury, you might even explore cutting him too.  The Packers only seem to invest in a big free agent once per decade, though if the Lions end up cutting Calvin Johnson, I would be all over that like stink on a hog.  Perhaps playing for a real franchise would re-ignite Johnson’s love of the game and keep him from retiring.

* Arizona is suddenly looking kind of shaky rather than looking like a Super Bowl contender.  Squeaked by the Packers here and blown out by the Seahawks in Week 17…that doesn’t bode too well for them facing the Panthers or Seattle again next week, or even facing New England/Pittsburgh/Denver in the Super Bowl.

And finally, there’s one bright side to this Packers defeat.  Next week, I’l be making my annual trip up to visit my buddy Kyle and his family.  For each of the last THREE YEARS, this trip has coincided with my watching the Packers get eliminated from the playoffs from the comfort of Kyle’s living room.  Since I wouldn’t have been bullish on Green Bay’s chances next week against Seattle or Carolina, there was a solid chance that this hellish streak of bad luck at Kyle’s place could’ve continued for a Bills-esque fourth year.  I did joke with Kyle that if it happened again, I’d burn his house to the ground, so it’s fortunate for all that that was avoided (since I wasn’t joking).
Posted by Question Mark at 1:09 AM