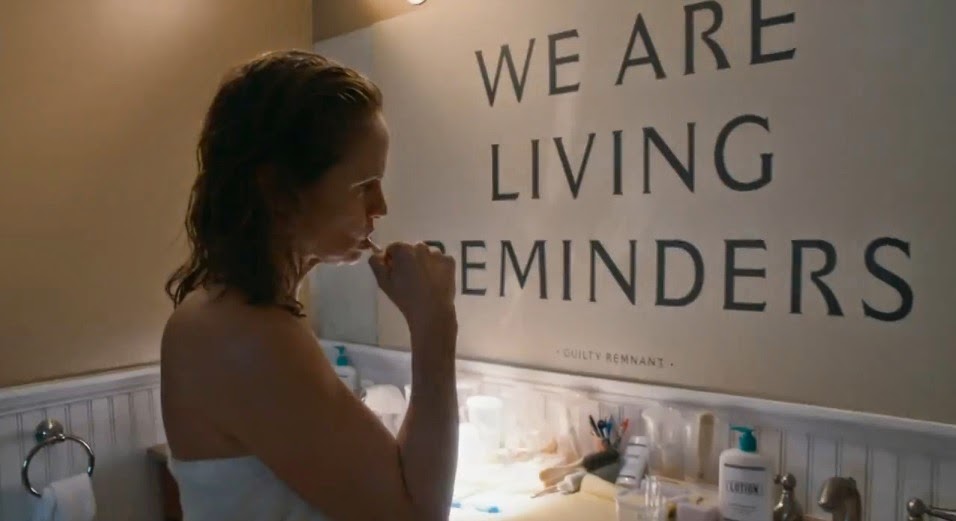 As an avid Game Of Thrones viewer who didn't read the "A Song Of Fire And Ice" books, it's an interesting TV experience to now have the shoe on the other foot for me as I watch The Leftovers.  It's a different feeling, however.  The "SoFaI" fans watch Game Of Thrones with a) eagerness to see how their favourite scenes and characters are recreated on screen, b) curiosity and/or worry to see what will be changed and omitted from the books or c) wondering about either the story's ultimate conclusion or future spoilers for novels, since George R.R. Martin hasn't finished putting pen to paper.  (And it's virtually impossible he'll finish his story before the series provides its own ending.  Or Martin may feel he's too old to finish his book series and will rely on Game Of Thrones to provide the ending for him.)

Uh, sorry for the GoT sideline.  I guess you could say it was a (Sudden) Departure from what I wanted to talk about, which is the thoroughly weird first two episodes of the Leftovers series.  I read the novel last summer and enjoyed it, though since the series had already been announced, my first thought upon finishing wasn't about the book itself, but rather wondering how the hell Damon Lindelof and company were going to make a series out of this.  A movie, sure.  A miniseries, yeah.  But 10-12 episodes of content over several years?  Lindelof put an end-date on LOST so I'm presuming he isn't planning to keep cranking out Leftovers seasons for as long as the series remains profitable, yet even a modest run or three or four seasons seems like a bit of a stretch, barring some narrative gymnastics (more on that in a minute).

After watching the first two episodes, it appears as if the novel's story may be elongated by elongating the grief period.  Tom Perrotta's novel worked in large part because it treated its impossible premise seriously, albeit with about 20% of a satirical flourish.  (The joke about Shaq, J-Lo and the other celebrities lost in the Sudden Departure is straight from the novel, and given the 'Perfect Strangers' bit in the second episode, I wonder if name-dropping disappeared celebs is going be a running gag.)  Leftovers the series, however, is serious bordering on mordant thus far.  It's so dark that the little moments of levity like the celebrity list almost feels inappropriate given how depressed everything else is.

Depressed doesn't necessarily mean 'bad,' however, as I'm still quite intrigued to see how this series is going to develop, and I've enjoyed (is that the right word for something this dark?) both episodes.  This could be, however, since I've read the book and somewhat know what I'm getting into.  The majority of viewers haven't read the book, and thus you have the explanation for some of the negative online reaction to the series.  This is going to be a hard watch, and a large portion of the TV audience isn't on board for another mysterious series by the LOST guy that lacks that show's ability to deliver some lighter moments.  (Clearly, Jorge Garcia should've been cast as Holy Wayne!)

n.b. One ultra-annoying aspect of most negative Leftovers reviews, and even some of the positive ones, is that the reviewer is only viewing this series through the lens of their own dissatisfaction with the end of LOST.  It's pretty lazy criticism, if you ask me.  Do I personally wish LOST's final season had gone in a different direction?  Sure, but that doesn't mean I'm condemning Lindelof to never working on another TV series again, or assuming that this show will be exactly the same as his previous one.  If I did, that would be pretty stupid logic.  "Pfft, this series was created by the Lone Gunmen guy?  That series wasn't good so this series about the meth-dealing teacher can't be good either!"

(Some book spoilers are coming, so be warned.  And spoilers for LOST, since why not.)

The big fear with Lindelof is that the negative viewers are already presuming that the mystery of the Sudden Departure will never be solved.  Well, newsflash, it isn't solved in the novel* either since Perrotta's entire point was to show the aftershocks of a cataclysmic event, not the whys and hows of the event itself.  He made his event a pseudo-Rapture rather than, say, an earthquake or a pandemic since that kind of grief is recognizable in real life.  140 million people vanishing into thin air is something impossible to conceive or relate to, which is how Perrotta gets both we readers and his characters similarly unable to wrap their heads around the enormity of what happened with the Sudden Departure.

* = though Perrotta may present one theory.  Near the end of the book, Nora mentions that just before her family disappeared, she was frustrated at them and wished they'd all just vanish.  Instants later, they're gone.  Now, it's possible I'm overanalyzing what might've just been another expression of Nora's grief, yet this to me seemed like a 'reason' for the Departure.  Some cosmic being or higher power decided to remove everyone on Earth who was having death or absence wished upon them at one particular instant, and the 140 million gone were the ultimate "be careful what you wish for" lesson.  I admit this is an imperfect idea, since it's established in the book that the Departure seems completely random, whereas my theory would seem to mean that a large percentage of the 140 million would be dictators, terrorists, murderers, virtually every major politician and most major celebrities.  Also, my theory may explain the 'why' of the Sudden Departure but it explains nothing else, and probably adds several more questions to the pile.

This leads to the one big elephant in the room about the series, which is what I hinting earlier when talking about the narrative gymnastics that might be needed to make this show last for multiple seasons.  Obviously things will have to go beyond the events of the novel, and it's even possible the show could approach the thing that is definitively NOT part of the novel, which is explaining what the hell the Sudden Departure was all about.  Lindelof had been pretty adamant in saying that this wasn't going to be part of the show but he left the door open just a crack in this interview with Alan Sepinwall when he noted they couldn't guarantee they WOULDN'T explore the Departure since he didn't want to seal himself off creatively.

On the one hand, good for Lindelof for not putting himself into another "nope, they're not in purgatory" narrative box.*  On the other hand, nothing would ruin The Leftovers as quickly as somehow getting into an exploration of the origins of the Sudden Departure.  Perrotta had no intention of explaining it, my Nora theory aside.  I feel like even hinting at answers or vaguely ascribing it to one thing or another would put this show down a garden path to inanity.

* = Also, grrr to most LOST finale haters, they weren't in friggin' purgatory!  The alternate universe of the sixth season was some kind of limbo the characters found themselves in *after* they had died in the manners depicted on the Island.  No, they didn't all "die in the plane crash" and the whole show didn't happen --- the events on the Island indeed took place and there wasn't a narrative cheat.  This isn't so hard to understand.  I swear, half the online hatred of that finale is based on sheer ignorance.

While Lindelof and Perrotta are undoubtedly clever writers, I flat-out don't believe they could ever possibly come up with a capital-a Answer for the vanishings that half the audience wouldn't automatically roll their eyes at.  Aliens?  An actual divine intervention for some reason?  The devil?  Hadron collider experiment gone awry?  We don't need to know how the sausage is being made, we just want the leftovers.  I realize that many viewers are watching this show only because of the narrative hook of the Departure, so Lindelof is somewhat damned if he does or damned if doesn't, but nope, he's only truly damned if he does.  The idea of a show based around searching for meaning in the face of an unknowable situation is interesting enough that you don't' actually need the meaning.

So in short, I'm digging it so far.  It is a flat-out creepy show that, even though I've read the book, I'm never really sure what the hell is going to happen.  I'm very much looking forward to some of the iconic book moments recreated on screen (basically everything involving the Guilty Remnants is going to get increasingly frightening by the moment) and I have a lot of respect for these acting performances that are either already right on the edge of madness (Justin Theroux, Chris Zylka, Liv Tyler) or either drastically underplayed (Amy Brenneman and all the GR crew, Michael Gaston).  Then there's Paterson Joseph, who only has to make minor adjustments to his hilarious Alan Johnson character from "Peep Show" to make it creepy as hell.
Posted by Question Mark at 2:34 PM