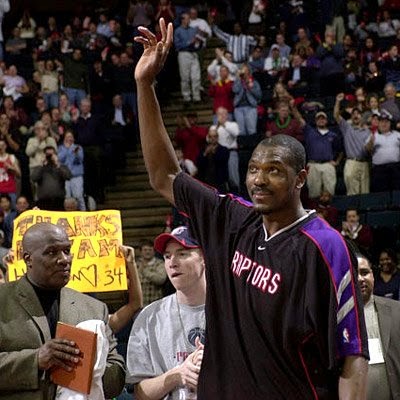 I've gotta say, "Raptors playoff preview" wasn't exactly on my radar as a possible post topic last November but here we are.  Let's make no mistake --- the Raptors are where they are thanks to the absolute trash heap that is the NBA Eastern Conference.  If the NBA suddenly ruled that the Phoenix Suns (48-34 but ninth in the West) were being slotted into the East's #8 seed in place of the terrible 38-44 Haws, I would honestly be picking Phoenix over the Pacers right now.  Not a doubt in my mind.  Hell, I'd have Phoenix going to the East finals before finally going down to Miami.  You could even talk me into the Timberwolves (10th in the West) winning a round in the East.

(Interlude: the T-Wolves and Grizzlies have to be kicking themselves over the sale of the Milwaukee Bucks, which seems to confirm that the team will be remaining in Milwaukee for years to come.  The hot rumour was that the Bucks could've moved to Seattle, which obviously would've meant realignment, which would've meant that one of Minnesota or Memphis is the lucky duck who gets into the much easier conference.  Sure, you could argue that the conferences won't be so lopsided forever…but the West has been the far superior side for the better part of a decade.  Things ain't changing anytime soon.)

In the blind East, however, the one-eyed Raptors were kings, even capturing a division title.  Going into the year, it was supposed that the Raptors would be one of the many teams tanking to get a nice spot in the star-laden 2014 draft.  Toronto would draft one of those stars and then hope he blossomed into a superstar, and then build a nice team around him.  Instead, the Raptors went ahead and built that nice team already, though they're still clearly a mega-watt, top-10-in-the-NBA star away from being actual contenders.  No, Kyle Lowry fans, he isn't that guy, though obviously he had a terrific year.

Unfortunately for the Raptors, it all ends in the first round for them since they're playing against the red-hot Brooklyn Nets.  It's certainly possible the Raptors COULD win this series…it's a tribute to how frisky the Raps have played this season that they have a more than legit shot against any team in the East except Miami.  That said, Brooklyn is a better team on paper and they're going to get every call.  It's a tough break for the Raptors since if they'd fallen to the fourth seed, they would've played the easy mark Wizards, and then faced the collapsing Pacers in the second round.  The Raptors had a path to the East finals right in front of them, and the matchups just didn't fall their way, and it's all over.

Anyway, this is all a moot point since as I wrote back in November, the NBA is nothing if not a predictable league.  The only two Finals matchups I see as realistic possibilities are Miami vs. San Antonio or Miami vs. Oklahoma City.  The first is the likelier of the two since the Spurs seem to be going to their championship zone and are nigh-impossible to beat in that state.  The Thunder's only chance would be if Kevin Durant just goes unconscious and carries the team on his back, which is a distinct possibility given Durant's ability.  But still, Miami/San Antonio rematch seems to be the best bet, and I think we all want a rematch of last year's crazy Finals.  I'd love to see the Spurs win and give Tim Duncan that fifth ring, but since the Heat were my preseason pick last fall, I'll stick with them.

Heat over Nets
Spurs over Thunder

Heat over Spurs (in seven games)
Posted by Question Mark at 2:01 AM