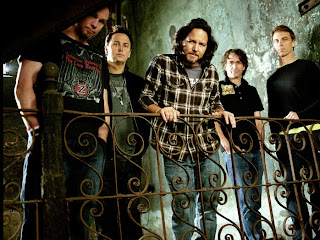 I'm not *crazy* about Pearl Jam's new record, Lightning Bolt.  I quite enjoyed listening to the disc and then completely forgot about almost every song as soon as it was over.  Listened to it a second time, enjoyed it even more and then boom….five minutes after it was done, I could hum nary but a few tunes on command.  It could still be a grower, sort of like how I'm enjoying Backspacer a lot more now than I did in 2010.

Fortunately, my Pearl Jam fandom is no worse for wear given that I caught their concert in Buffalo last month.  It was my third time seeing the band and the show was as good as ever, despite my unfamiliarity with the newer tunes (the record hadn't actually been released yet).  I will say, though, that "Sirens" was an immediate crowd favourite and works awesomely well as an arena anthem.  I'll also say that the ol' First Niagara Center is a pretty nice venue --- has kind of a vibe of being like a really nice local hockey rink, just enormous and with a lot of money put into it.  The only downside is the Sabres.

Anyway, since I'm in a Pearl Jam mode right now and they're one of my all-time favourites, they're a natural choice for my latest "best songs" post.  As always, these are the tunes that I'd cite as my favourites --- not that there aren't lots of other good ones, but these are the 55 that I thought were the tops.  It's possible there are some obscure B-sides that I haven't heard (especially since Pearl Jam have more random tracks than most bands) but overall, I think I've had a pretty good listen to their catalogue and have covered most of the bases.

While all three of my past lists have been subjective, this one felt moreso, for some strange reason.  Maybe only the top 7-8 are locked, whereas lots of other songs within the top 30 could easily be shuffled around if I were to write this list again in just a few months' time.  If I've left your favourite Pearl Jam tune out, just presume it was #56 and I'm leaving it off out of passive-aggressive spite.  You shouldn't have pissed me off like that!