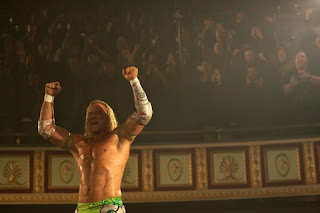 If you haven't seen "The Wrestler," then ignore this post entirely since it contains major spoilers.  Also, if you haven't seen "The Wrestler," then go see it immediately since it's awesome.  It's one of my absolute favourite films of the last decade, a great ode to old-time pro wrestling and the story of a man trying to recapture a bit of value in his life.  Mickey Rourke delivers a pantheon acting performance in this movie, and as good as Sean Penn was in "Milk" that same year, Rourke deserved the Oscar.  You can know jack-all about wrestling and still find The Wrestler a completely enthralling, moving (if not exactly uplifting) story.

But anyway, rave review aside, let's talk about the ending.  Oh my god, the ending.  Just like in any great wrestling bout, the biggest move comes at the finish.  Randy the Ram is going ahead with his last match, despite the fact that his heart condition is poor enough that wrestling even once more will probably kill him.  He's met backstage before the match by his semi-girlfriend Cassidy (Marisa Tomei, also terrific in this movie by the way) who tries to talk him out of it, but Randy has made up his mind and Cassidy can't bear to watch.

So Randy wrestles, starts feeling ill and yet continues on.  He goes ahead with the planned finish --- his big signature move, the "Ram Jam" diving double fistdrop off the top rope.  It's more or less outright stated that Randy will kill himself by performing this move in his condition but dammit, Randy is going ahead with it.  He gets on the top turnbuckle, looks to the arena entranceway and just sees the curtains hanging there limply.  As the film's score swells, Randy takes the leap off the ropes in slow-motion, the screen fades to white and then Bruce Springsteen's epic soundtrack title song begins playing.  Talk about an affecting scene.  And Springsteen's song didn't even get nominated for an Oscar, good lord.

The reason I'm bringing this up is due to a recent conversation with my buddy Dave.  The topic of this movie came up and we were both raving about it, though we had totally different interpretations.

It all centered around that shot of the entrance curtains.  My interpretation was that this shot was entirely symbolic.  The arena entrance is, essentially, the gates of heaven in this context, and Randy is seeing them on the horizon since he's about to leap off the top rope (and to his death).  Of course, in Randy's mind, the gates of heaven look like a wrestling entranceway.  To him, St. Peter probably also looks a lot like Mean Gene Okerlund.

Dave's interpretation was much simpler --- Randy is simply looking one last time to see if Cassidy is still there, and when she isn't, he goes through with it and jumps.  Despite Randy's tough talk earlier about putting the match first, he really does love her and had she appeared, he likely would've stopped on the spot and gotten medical attention.  With no Cassidy, however, Randy felt he had nothing left to live for and thus he Ram Jammed himself into oblivion.

Now, it's very possible we're both right since naturally there are a thousand ways to "read" a movie.  As a former film student, I spun many an interpretation of countless movies in my undergrad days…of course, my takes were all brilliant and correct but some of my classmates' interpretations, woo boy, were they out there!  I think I might have a point with my theory due to the camerawork.  It's kind of a sudden cut, from the emotion and action in the ring and Randy's facial expressions to this somewhat flat shot of the curtains.  It's almost like it's taking place in a different world, a.k.a. the afterlife.  Then again, it's also very possible that my artsy-fartsy film student training is making me over-think a pretty straightforward ending and Dave is on the money with his Occam's Razor reading of the end scenes.

Anyway, for those of you who saw the movie, am I totally out of to lunch or did some of you happen to interpret Randy's end in the same fashion?  Also, if it turns out that heaven does resemble a wrestling arena, then my years of watching WWF as a kid are really going to pay off.  I'll get up there and go, "Well, ya know somethin' Saint Peter…"
Posted by Question Mark at 3:03 AM

I've had a lot of arguments over the ending with my wife. She insists that he dies at the end, plain and simple. My view is that it doesn't matter if he dies at the end of this particular match; he's committed to himself to a way of life that will eventually kill him prematurely, whether it's now or in a few months or years, whether it's in the ring or a lonely hotel room. This is the moment that seals his fate. (It's really very similar to my interpretation to the ending of the Sopranos.)

Very interesting interpretation. I hadn't considered that he WOULDN'T die right there on the spot, in the ring, in that very match.