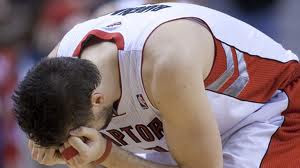 So the Raptors might be changing their team name.  Sad day.  It's an especially tough blow to my buddy Eric, who wore an ENORMOUS Toronto Raptors cap in his Grade 9 class picture and was then referred to in some quarters as "The Rap-Tor" for all of high school.  And yes, with that specific pronunciation.

For as much flack as the club takes for naming their club after an early-1990's movie, "Raptors" really isn't that terrible a name.  It's not like a velociraptor ever stopped being vicious or cool dinosaurs.  And compared to a lot of trendy modern team names, "Raptors" holds up pretty well.

But anyway, if the team does change their name, the obvious name is Towers.  I've been pushing this since 1994.  Basketball players are TALL!  Like a tower!  And Toronto has a famous tower!  It fits so darn well!  That said, the leading contender seems to be "Huskies," after both Toronto's original NBA franchise from the 1940's and from Oliver Miller's body type.  If Huskies or TOWERS don't get the nod, however, I have a few more ideas.