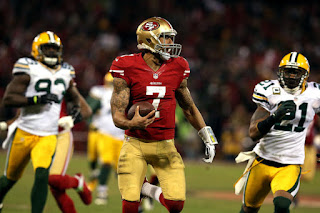 The (sadly pretty much) annual Packers postmortem is a day late this year, not because I've been locked in a windowless padded room for the last 24 hours but rather because I spent the weekend in Whitby with my old team-up buddy Kyle and his adorable family.  Their house, while very nice, is very lacking in windowless padded rooms, so I was forced to just accept Green Bay's loss like a man.  Damn you maturity, you're no fun.  Anyway, I've traced the Packers' defeat to three possible reasons…

1. A few months ago I was watching a Thursday night football game in a pub when the waitress asked if I wanted to participate in the bar's regular football trivia contest, where the winner would win one of several NFL shirts hung around the room.  I agreed and somehow won the thing despite knowing relatively little about the histories of the Vikings or the Buccaneers (@humblebrag).  While there was a Green Bay hoodie available, I actually had my eye on a 49ers sweater given that my buddy Trev's birthday was coming up and he's a San Francisco fan.  So I'd made my choice…but the waitress had already brought me the Packer hoodie since she judged by my Packer toque that I was a Green Bay fan.  Since an exchange would've made her climb up on the ladder again to get the 49ers sweater, I just kept my mouth shut and accepted the hoodie.  Clearly this was bad karma and had I insisted on the San Francisco sweater for Trevor, the butterfly effect would've seen to it that Alex Smith remained the Niners' quarterback and Saturday's result would've been different.

2. I left my traditional lucky Cheesehead back in London, so I wasn't able to bust out my tactic of putting the Cheesehead on if the Pack are losing or facing a tough situation in the second half of a game.  To recap, my garment-related Packers superstitions include the Cheesehead, always wearing at least one item of Packer clothing on game days, and wearing boxer shorts in the colours of the opposing team, just for variety (and because one man can only own so many green-and-gold-coloured underwear).

3. The 49ers are just a better team than Green Bay.  If you can believe it, this might've had more to do with the outcome of the game than ANY of my clothing choices.  San Fran pretty much dismantled the Packers back in Week One and I'm not sure why I'd convinced myself that Green Bay would fare better four months later, especially when the Niners were, if anything, even more dangerous with Kaepernick as quarterback.  It's not like the Packers had suddenly proven themselves to not wilt against physical teams* or against teams with mobile quarterbacks.**  I said all season long that the two teams I was terrified for Green Bay to face in the playoffs were the Giants and 49ers and lo and behold, the 49ers came up big.

As confident as I was in the Packers' chances of beating anyone besides those two clubs, I didn't have nearly the confidence in the Pack in 2012 that I did last season.  Despite all of the 2011 team's flaws, I thought they had a legit shot to repeat as champions, though in hindsight the 15-1 record was a bit of a mirage.  This year, however, the flaws were all more or less still there but hidden by the fact that Green Bay had a pretty easy schedule (thank you AFC South).  The Packers were 11-5 overall but just 4-5 against teams with winning records, and even two of those wins were against Chicago, which barely count since Green Bay just seems to have the Bears' number.

Here are those flaws, in order of importance.  A swiss cheese offensive line; yet another season of next-to-no production from the running back position; Mason Crosby inexplicably becoming the worst kicker in the league for about 12 weeks before pulling himself together by the end of the season; a defence that (while improved from 2012) was still far from a strength and was thin in the middle beyond Clay Matthews (Desmond Bishop being injured for the season was a major and underrated loss for Green Bay); injuries to key receivers that essentially kept Aaron Rodgers without a full complement of weapons for the entire seasons; Mike McCarthy's continuing inability to make in-game adjustments in the face of major obstacles, as we saw last week when Kaepernick kept running and running and Green Bay had no way of countering.

It's going to be a busy postseason in Green Bay since all of these areas have to be addressed, aside from I guess McCarthy's game management since it's not like they're going to fire him or anything.  This is probably it for Greg Jennings, Donald Driver and Jermichael Finley as Packers, so Rodgers will need some fresh weapons next year to go alongside James Jones, Randall Cobb and Jordy Nelson.  The O-line needs major help since keeping Rodgers healthy is of paramount importance to the team, not to mention getting a solid running game to keep the Packers from becoming even more one-dimensional than they already are.  The D still has holes, to boot.  As much as Ted Thompson hates signing free agents, it might behoove the Packers to spend some money since they have more holes than can be filled via internal promotions and the draft.

The Packers will be competitive for as long as they have Rodgers, and this year did bring some good news for the future in the form of Jones' and Cobb's breakout years plus a great rookie season from Casey Hayward.  This is now two straight years, however, where Green Bay has fallen to most complete teams in the playoffs and they can't keep just relying on Rodgers (or my clothes superstitions) to bail them out.
Posted by Question Mark at 6:41 PM