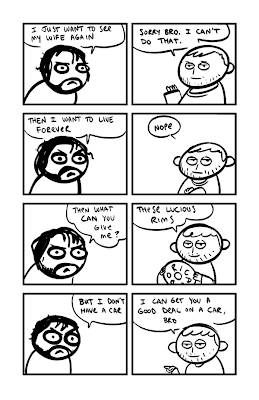 There's no new LOST episode tonight, as this is one week break before we head into the home stretch of episodes in the series. To fill the void, here's a bunch of Lost-related stuff from both my brain and from around the web.

Firstly, there's this epic spread of LOST-related stuff in the latest issue of Wired. It has all sorts of material about character connections, an interview with Lindelof and Cuse, some behind-the-scenes tech stuff, etc. But the topper is the big photo of Lindelof and Cuse in their office with that wonderful whiteboard of information. Now, I wouldn't put it past these two to put some fake stuff on the board just to psych everyone out, but you'll notice the list of episodes on the left side. You have the episode title and centric character listed underneath, as we can tell from the first three. The last two episodes are the next two episodes, one of which is titled 'The Candidate' and looks like it'll be centered around Jack and someone else (Claire?). The other episode is titled, apparently, 'Across The Sea' and the main character's name ends in '---ey.' We had a Hurley episode just a couple of weeks ago, which leads me to believe that this is going to be an episode about Smokey himself, the Man in Black. Great day in the morning, I cannot wait to see that episode.

Theory #1! Ok, well, if we're getting to know who the Monster is, this theory may be blown apart pretty damn quickly, but I'll take a stab at (sort of) answering that now. The big question about the alternate reality universe we've seen all season has been what exactly it is. It's not a world without the Island at all, since we've seen it at the bottom of the ocean and we know that Ben and Roger Linus did indeed temporarily join the DHARMA Initiative and visit the Island in the 70's, like they did in the real timeline. But is the alt-verse a world without Jacob? A world without the MIB? Or maybe a world where the MIB has been able to leave the Island? This last one is my running theory, since we know that Eloise Widmore (who's totally in on it) revealed to Desmond that his situation in the alt-verse was created specifically just for him. Methinks that all the characters had their so-called deepest desires fulfilled by the MIB in this alternate world, perhaps to confuse them into thinking the world would be better off if he had been freed. Sayid gets Nadia alive again, Desmond is Widmore's best pal, Jack has a son, Sawyer isn't a criminal, Locke is with Helen, etc. Now, what's interesting is that some of the characters are in pretty deep shit (Kate is still a fugitive, Jin and Sun are living in secret), so one wonders why their alt-lives aren't as improved as the other Losties.

But, whatever, the bottom line is that Desmond knows about both realities, and in the alt-verse, he's trying to bring everyone together to awaken them as well. He appears to have done so with Hurley by getting him together with Libby, and his hit-and-run on Locke was probably an attempt to induce a similar kind of traumatic event a la Desmond's underwater car crash with Charlie. (By the way, sucks to be Locke. Des is like, "Ok, let's see, I can get Hurley to remember by having him make out with an attractive woman on a beach. But for John, hmm, let me think, yeah, I'll have to run him over with my car.") Once everyone is awakened, then I guess the choice becomes as to whether or not the alt-verse characters choose to keep these lives the way they are, or reject this reality and somehow force the MIB back into captivity in the real reality. Eloise, by the way, is going along with the MIB since in this reality, she gets her son back.

Ok, so that's my basic take on what the sideways-universe is. But one question remains...if the MIB is free in this reality, where is he? Here's what I think is going on. In the Island reality, we've seen the MIB troubled by the visions of that creepy kid following him around in the jungle. This kid looks all the world like a young Jacob maybe somehow regrowing (like a phoenix?) to torment his nemesis. This got me to thinking, what if the MIB is similarly regenerating himself in the alt-verse? Perhaps by giving himself the childhood that he never had in the Island-verse under his self-described "crazy mother"? And, whereas most changes in the alt-verse have been the same characters in different situations, the only brand-new character we've seen has been Jack's son, David. So that's it, David is really the MIB, hiding in plain sight as a younger version of himself and implanting himself in this reality as Jack's son. It's kind of a page out of Buffy's book, when Dawn ended up being not Buffy's actual sister, but rather a key of mystical energy who was implanted in person form into the character's memories. (If this plotline sounds goofy, hey folks, we all watch LOST. Who are we to judge?)

Theory #2! Okay, so if we learn who or what the Monster is, then perhaps the other major question looming over the final episodes is who will the new Jacob be --- who's the final candidate? My idea is that we don't have to wait to see if it will be Hurley, Sayid, Sawyer, Jack or Sun/Jin. We've been seeing the Candidate in action for a while now, since the new Jacob is Christian Shephard. In the same way that the Man In Black took Locke's appearance when his corpse landed on the Island, Christian's body was given the same power. The catch is, however, that the nature of the MIB's power is that he usurps the dead for his own purposes. In Jacob's case, his power is all about life --- so the revived Christian wasn't Jacob in a new body, but actually the original Christian Shephard, with his original memories but perhaps with an added sense of what his duties are on the Island.

The Christian we've seen wearing the dark suit has, indeed, been the MIB since the Monster can only pose as the dead in the clothing that they died in (Alex, Yemi, etc.) So MIB wasn't lying when he told Jack that he was posing as Christian in 'White Rabbit.' MIB is able to do this since Christian's original body is still somewhere on the Island, and thus is within the realm of his powers. But Christian in his casual wear, when he appeared on the boat with Michael or in the donkey wheel chamber with Locke, is actually the Candidate Christian.

The 'Shephard' name that's #23 on the lighthouse wheel is actually Christian, not Jack. Remember that the lighthouse mirror showed images of where Jacob touched his candidates (Sun and Jin's wedding chapel, the church where Sawyer's parents funeral was held), and for Shephard, it showed Jack's childhood home. Well, we know that Jack was touched by Jacob in the hospital corridor, not at this house. This home was where CHRISTIAN was instead touched by Jacob. He's been the chosen candidate all along.

This, in a nutshell, is Jacob's own loophole against the machinations of the Monster. We know that the 'rules' prohibit the MIB from harming the candidates himself, so what Jacob did was make his choice early, thus leaving the rest of the candidates (the Lost characters) all around to interfere in the MIB's plans. The MIB is busy trying to figure out which candidates are left and which ones he has to try to eliminate, but little does he know that the candidate was chosen long ago, so his big plan to fly away with all the candidates in his thrall is for naught. Oh, and I'd say for that matter, it's a very big long shot that the MIB actually intends to take everyone along with him on a plane that may or may not even be able to get back up in the air. I'd suspect the MIB will try to get his gang of Others or Widmore's people to kill the rest of the Losties so he can (falsely) assume that there aren't any candidates left.

This guy Nedroid draws little LOST-related cartoons on Twitpics. They are funny. That's basically the only introduction I can muster up. Here are a few of the funnier ones, and click the link to look for more. 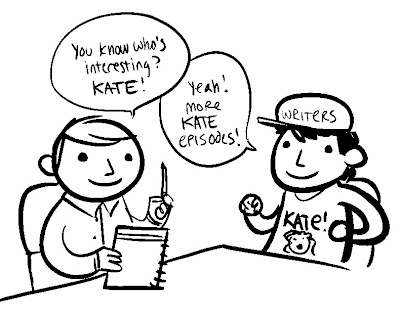 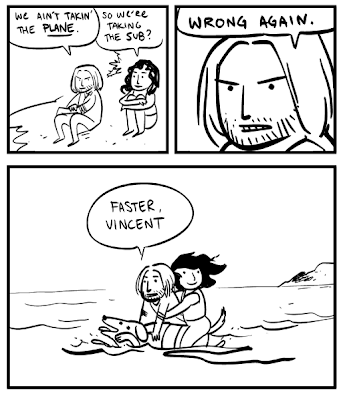 Posted by Question Mark at 2:25 PM