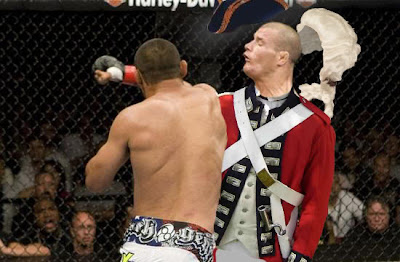 * Krzysztof Soszynski over Stephan Bonnar, decision (or death by consonants)
Bonnar hasn't won a fight since October 2007. Dana White always claimed that Bonnar and Forrest Griffin's Ultimate Fighter heroics had earned them lifetime contracts with the UFC, but we'll see how far that stretches after Bonnar once again takes a loss. Krzysztof didn't do much against Brandon Vera, but he's shown he can at least beat third-tier light-heavyweights, and frankly, third-tier might be a generous placing for Bonnar at this point.

* Goran Reljic over CB Dollaway, submission, round two
Reljic broke onto the UFC scene with a dominant win over Wilson Gouveia in May 2008, then dropped off the map thanks to a variety of injuries. Now he's back and down a weight class, so it's really hard to predict at all what he'll look like. Then again, I hate CB Dollaway. Ergo, Reljic taps him like there's no tomorrow.

* Chris Lytle over Brian Foster, knockout, round two
Lytle is kind of a journeyman with a middling record, but there's no doubt it takes a tough guy to beat him. He's almost a perfect gatekeeper for up-and-comers. Foster hasn't done anything that would make he think he has what it takes to get through said gate, so Lytle picks up a win and also an outside shot at either the submission or knockout of the night bonus.

* James Te-Huna over Igor Pokrajac, decision
Both of these guys are pretty much non-entities, so I'll pick the Aussie to win in his home country. Hopefully Andy Bernard is one of his training partners so he can bestow the nickname 'Big Te-Huna.'

* Joe Stevenson over George Sotiropoulos, decision
Great match-making for this one. George hasn't lost in the UFC, and Joe is on a two-fight win streak and is kind of a semi-gatekeeper in the lightweight division right now. This match will prove if George is ready to hang with the top guys in the division or not, since a win over Stevenson would probably put him in line for a #1 contender's bout. But I dunno, I have a feeling Stevenson just has a bit more experience in a big-match environment and he'll take advantage of George's nerves at fighting in front of his home fans. Should be a very tight match, and potentially a bit of a dull one, but Stevenson pulls it out.

* Keith Jardine over Ryan Bader, decision
Jardine gets his first fight in a while that isn't against a top-drawer light-heavyweight. Instead, it's against an unbeaten up-and-comer. Poor Keith. That said, Bader doesn't bring much to the table outside of wrestling, and I think Jardine can evade and stick-and-move long enough to earn the decision. This is two fights in a row, by the way, where I've picked the veteran to beat the young TUF star, so I'm bound to get at least one of them wrong. Damn you, universe.

* Mirko Filipovic over Anthony Perosh, knockout, round three
Perosh couldn't be more of a can if he came to the ring in a Ragu label. He's a last-minute fill-in for an ill Ben Rothwell, which means that even if Cro Cop wins, it still won't prove if Cro Cop has anything left in the tank or not. If Mirko loses this one, he should retire on the spot.

* Wanderlei Silva over Michael Bisping, knockout, round two
Am I stupid for continually picking Silva when it's clear he's a shell of his former shelf? Probably. But then again, his aggressive punching style is perfectly suited for a fighter like Bisping, a man so dumb he managed to get horrifyingly knocked out by Dan Henderson's right hand after spending months training to avoid that very punch. Bisping can stick-and-move against Silva for a while, but Wandy needs just one opening to bring Bisping down.

* Cain Velasquez over Antonio Rodrigo Nogueira, TKO, round three
Hey, I picked all veterans thus far, one of the younger guys has to take a fight. As good as Nog looked against Randy Couture, the fact that he couldn't knock Randy out in spite of landing several clean shots tells me that his punching power might be on the wane. Velasquez can take a punch, as we saw against Cheick Kongo. I can see Cain just riding Nog out to a decision, or possibly catching him with a shot of his own. Nogueira claims a staph infection was the reason for his glass jaw against Frank Mir, but I dunno --- he's an old 33 who has been in a lot of wars. It's odd to pick Nogueira (who went his whole career without being knocked out) to eat his second KO in a little over a year, but there you have it. Cain wins and goes on to face either Brock Lesnar or Junior Dos Santos in his next fight. Either way, it'll be a huge matchup.
Posted by Question Mark at 5:19 PM