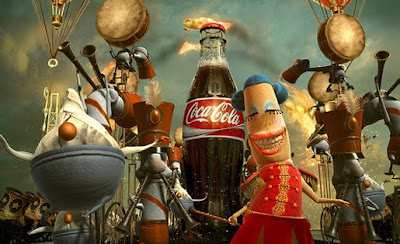 When you were a kid, you probably fantasized about your dream house. Amusement park in the backyard, race cars taking you from room to room, and maybe a Willy Wonka-esque waterfall of liquid chocolate in the basement. Maybe not chocolate, depending on your taste, but some type of treat being distributed in waterfall form. A veritable Niagara of nourishment, if you will.

Sounds like a great idea when you're a kid. It's not so great in real life.

I was coming home from work a couple of weeks ago with two stories to write up before my deadline, and little time to waste. As I parked my car, however, I realized I was short on soda up in the fridge, so I took a 24-can case of Coca-Cola that's been in my trunk for the last two weeks. You see, when you have to walk up two flights of stairs to get to your apartment (and you're also world-class lazy like me), you learn to pick and choose how much you carry up at any given time. But on this day, though I was wearing a backpack, I figured what the hell, time to Coke it up. (That last sentence, by the way, was uttered 682,908 times by Wall Street executives between the years 1985 and 1987.)

So I walk up the two flights to my apartment, with my backpack slung over my back and the case in my arms. This was an old-school case too --- cardboard base, 24 cans, plastic over the top. Classic. Coke Classic, if you will. My apartment's main stairwell goes straight up with no curves, with one landing for the second floor apartment and then up to ours. There's no real area to put anything down, unless you count the tiny edge of the hand-railing at the top of our landing.

Of course, I decided that this sliver of metal was enough room to brace the Coke while I turned to get my keys and unlock the door. Theoretically, there was no problem --- except that my keys were in my left pocket, the same side that I was bracing the Coke with. So I clumsily reached into my pocket while trying to hold the case at the same time, and...well, 'clumsily' is really the main description of this whole story. My arm slipped and down. Went. The Coke.

The case exploded into fizzy madness. The case itself retained about half the cans and just flopped there upside down on the top step, with cola leaking everywhere. The other 12 cans cascaded downward, with a few making it all the way to the very bottom of the stairwell and exploding into a giant puddle of pop.

My roommate popped his head out the front door, perhaps alerted by either the massive crash or the stream of Ozzie Guillen-esque obscenities flowing from my mouth. His quote: "Wow, you dropped that in exactly the wrong place." He was right. Twenty-four cans, dropped directly on the edge of the landing and the top step. Had it just landed a few inches inside, entirely on the landing, it would've been fine. But the fates weren't smiling on me on this day.

So, on a day when I had things to do, I had to spend about a half-hour cleaning up broken cans and giving my stairwell a thorough mopping. God bless the man who invented the Swiffer Sweeper....I presume his name is, like, Tom Swiffer or something. Not a single can could be salvaged for drinking purposes, but frankly, even if any had, the memory would have stopped me before I even took a single sip. I already have to live with the reminder thanks to the fact that the stairs are still sticky as hell. Every time I, my roommate or my neighbours walk up the steps, our shoes make this weird crackly velcro sound. So, in a way, I was providing building security. Now a psychopath can't break in and sneak into our apartments in the middle of the night. My coked-up stairwell is like a cheaper version of Alarmforce, albeit without a catchy jingle.

The moral of the story is, don't drop a case of Coke down a stairwell.
Posted by Question Mark at 6:50 PM