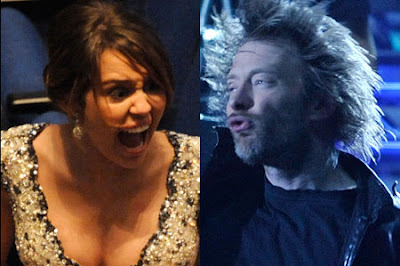 The "feud" between Radiohead and Miley Cyrus already seems to have run out of steam, and I'm disappointed. There was a ton of comic material that was yet to be mined from the situation. I was hoping for just a full-out bout of nonsense where Miley rhymes 'Radiohead' with 'pseudo-friend' on her next record, which then gets everyone wondering if Radiohead will make a response, which would then lead to the wonderful spectacle of 12-year-old girls trying to decipher Thom Yorke lyrics. They'd be twittering back and forth, "When he says 'the raindrops' 30 times in a row, is he really saying that Miley is all wet?!?!" "OMG, your so right!!!!!" "Guyz, I think the computer voice in the background said something about Hannah Montana!!! It's so mean!"

I'm not sure which is my favourite part of this absurd feud. It's either Miley's claim that Radiohead were 'her idols,' or her teary declaration that she was going to 'ruin' the band by publicizing how mean they were to her. Yeah, way to stick it to them, Miley! Now they'll be forced to sell their albums online or only have their music played on alternative radio or....wait....

Two ways of looking at this: Radiohead's PR guy fielded the request and correctly assumed that his band didn't want to meet with Miley, and made a judgement call. Or, it was RH themselves who didn't want to meet with Miley and so it actually was a deliberate diss. In a purely objective sense, I can see how this might be construed as a bit dickish. I don't believe for a second Yorke's excuse that when it comes to doing backstage meet-and-greets, Radiohead "don't really do that," since if it had been someone like, say, Robert Plant wanting to say hello, Radiohead would've had all the time in the world for him. It would've cost nothing for Radiohead to spend a minute shaking Miley's hand, since, as their tour DVD taught us, Meeting People Is Easy.

That said, however, I can see Radiohead's argument. Would you really want to meet someone who claimed to be a huge admirer of yours, yet did something in your line of work that you had no respect for whatsoever? Do you think Stanley Kubrick would go out of his way to meet the Girls Gone Wild guy? Radiohead are pretty iconoclastic guys, so much so that I was surprised they'd even agree to perform at the Grammys in the first place. I'd doubt that they have much patience for what I'd imagine is actually a common occurrence in the celebrity world --- stars having to meet other stars that they don't like at all, yet they have to smile politely while trying to quickly think of the other star's least-objectionable material for an easy "Oh, I loved you in _____" compliment. This seems like a situation so commonplace in Hollywood that I'm surprised Larry David hasn't turned it into a Curb episode yet, where Larry meets a star whose work he doesn't care for, admits as much and then gets everyone mad at him for his lack of tact. The only comment that the probably somewhat bewildered Radiohead made in response to this Miley situation is, and I quote, "When Miley grows up, she’ll learn not to have such a sense of entitlement." Again, objectively, kind of dickish, but in this context, it sounds like the equivalent of something that Willy Wonka would say to Veruca Salt. If Radiohead were confronted with a PR guy saying that a Disney pop star had sent word through her manager that she wanted a private meeting backstage at the Grammys, I can see them declining just out of the sheer WTFness of it all. Maybe they thought they were being set up for a skit on Howie Do It. (Like, if you know Howie Mandel enough to realize it's him when he takes the wig off, shouldn't you be able to recognize him even in the fake outfit? I mean, if Howie Mandel walked into my apartment right now wearing a dreadlock wig, I wouldn't wonder who the Jamaican guy in my kitchen was, I'd just say 'Hey, there's Howie Mandel in a wig. I'll bet I'm about to be featured on that idiotic Howie Do It show.' Maybe I'm thinking about this too much.)

The most underrated funny element to this situation is that apparently Radiohead also shot down Kanye West's request for a backstage meeting and Kanye also declared war on RH, but nobody really paid notice to it since Kanye feuds with people on an hourly basis. I think he just started a feud with me based on this paragraph. But also, hey, if you're the media, you're obviously going to highlight the Cyrus angle. A Radiohead-Kanye 'feud' is something that is unlikely, but might've been conceivably plausible given that both artists are generally highly-acclaimed and at least travel in the same critical circles. A Radiohead-Miley Cyrus feud, however, is such a bizarre case of worlds colliding that it demands attention. On the bright side, by being sidelined in this feud, Kanye was spared my comparing him to, say, Augustus Gloop.
Posted by Question Mark at 4:43 AM