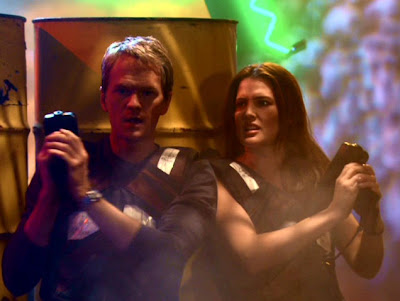 My cousin decided to celebrate her 23rd birthday by pretending it was her 13th birthday*, so last week we all trundled down to LaserQuest for an evening (well, more like an hour) of running around in the dark and zapping each other with cancer-inducing light rays.

* = I'm presuming that Diana's 13th birthday also included drinks at the Poacher's Arms afterwards. What? I didn't say alcohol was involved. She could've ordered milk. Ironically, I actually DID order milk at the Poach last Tuesday. We were having cake and milk just goes better with cake. I stand by my decision.

This was the first time I'd been to the LAQ in at least 15 years, so in some ways, I was a little rusty. I was surprisingly winded after the first round since I had forgotten how much running, jumping and dodging is involved. N.B., I use the term 'surprisingly' only as a personal feeling, since the casual observer would've considered my out-of-shape carcass sucking wind to be as inevitable as death, taxes and a Blue Jays non-playoff season.

But while I was a bit short of specific LaserQuest experience, my gameplay was greatly improved by 15 years of life experience. All that time spent watching 24, playing video games, absorbing lessons from Barney Stinson and being generally verrra sneaky, sir (/Turturro] has turned me into a LaserQuest beast. The 13-year-old Mark could've been happy to get through a LaserQuest round without tripping and falling in the dark, or without having to spend 10 minutes with the marshall while they fixed my defective equipment. But for the 27-year-old Mark, victory was not just a desire, it was an expectation. (Trash talk courtesy of No Fear Shirts, a subsidiary of the Sheinhardt Wig Company).

After finishing a Maple Leafsian 10th out of 14 players in the first game, I was warmed up and prepared for the second and final match. Using my bat-like sense of direction to navigate the darkened chamber, I made my way to the highest point of the maze, a.k.a. the Crow's Nest (named as such due to it being the final resting place of Adam Duritz). Upon arriving at the nest, I discovered two other players, Meghan and Katie, the latter of whom was sticking to a strategy of standing against a wall and not moving for the entire game. After we each zapped each other and then revenge-zapped our killers as soon as our packs came back on, a truce was declared and thus began the Defense Of The Nest, as it will soon be nicknamed in grade school history books everywhere. With Meghan manning the perch, myself manning the back entrance and Katie manning....er, her wall, we had the perfect vantage point for picking off anyone who came close to invading our territory. My personal favourite maneuver was to shoot downwards through a floor grate under my feet, as I could zap the shoulder panels of opposing players without their ever knowing who murderdeathkilled them. My most common victim was my buddy Trev, playing under the name 'Jack Burton' (I was 'David Lo Pan,' or as the LaserQuest marshall pronounced it, 'David Loppin') and wearing a white t-shirt that made him very easy to spot. Amidst the darkness of the LAQ maze, he was standing out like the friggin' lighthouse in Pete's Dragon. Trevor's cries of "Sonuva...." echoed throughout the arena. My other two most frequent foils were Meghan and Katie, under the auspices of "Oh, sorry, I thought you were someone else coming up the ramp. Sorry, truce, truce." Cheap? Yes. Sneaky? Yes. Successful?

Yes. After our 20 minutes was up, we shrugged off our packs and headed upstairs to receive our scores. The winner? You guessed it, David Lo Pan. After failure followed by 15 years of exile, I had finally captured a LaserQuest title. I didn't quite capture the top score of the day, so my victory didn't quite enter the annals of LaserQuest history, but still, it will hold a special place in my mind for the rest of time, or at least to the end of the month.

Perhaps this is the start of a long streak of avenging childhood disappointments while in my mid-twenties. Perhaps now I'll learn how to ride a bike. Or I'll ask out the girl who gave me seven valentines on V-Day in kindergarten. Or I'll pay my entire fourth grade class to re-enact the final at-bat of a crucial intramural softball game so I can crank a homer instead of pathetically swinging and missing. Do you think it would cost a lot? Maybe I'll get the Make-A-Wish Foundation to foot the bill. I'll tell them I have cancer or something...but the good kind that doesn't affect you whatsoever, like Jason Blake. Then again, after running around with a LaserQuest backpack for an hour, perhaps I really have cancer.

Note to self: never end a comedy post with the line, "Perhaps I really have cancer." It's a bit of a downer.
Posted by Question Mark at 11:26 PM