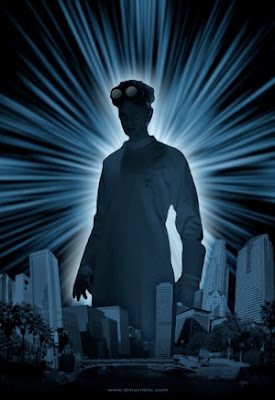 Attention Buffy fans! (And Firefly fans...and Neil Patrick Harris fans....you get the picture). Check out Dr. Horrible's Sing-Along Blog, a mini, Internet-only musical created by Joss Whedon and apparently half the dang Whedon family. The first two parts are up now, and the third and final act should be posted by later today or tomorrow.

What's not to like? Singing! Dancing! The legendary NPH! The great Nathan Fillion! The never-heard-of-her-before-this-but-quite-pleasant Felicia Day! Actually, a quick check of Day's IMDB page shows she played one of the slayers in training in the last season of Buffy. I probably forgot about her since I've successfully purged all memories of that horrible, crappy season out of my head.

BTW, who wants to pool their money, buy a racehorse and name it The Thoroughbred of Sin?

Also falling under the category of "This is adorable and musical" is Feist on Sesame Street. Is there really anything that can't be cool involving Muppets? Apparently Jason Segal is going to be writing an upcoming Muppets movie, so, yeah, fourth-last row center opening night, here I come. Has the Sesame Street set always looked so nicely constructed, or did they do some upgrades for the high-def era?

Some blog news. I'm leaving up the Tom Cruise vs. Kevin Costner poll for a few more days since it is becoming a burning debate of our time. Joe Posnanski has had the same question posted on his blog for the last couple of weeks, and after almost 2200 votes have been cast, Cruise is ahead by just three votes! This is truly a topic that has divided people like no other since the epic war of Tastes Great v. Less Filling

The result of the previous blog poll, by the way, revealed that the funniest member of Monty Python is John Cleese. Well, that's not a shocker. I'd rank them Cleese, Palin, Jones/Chapman in a tie, Idle and then poor ol' Gilliam.
Posted by Question Mark at 12:21 AM

Horrible iTunes promotion, it is.