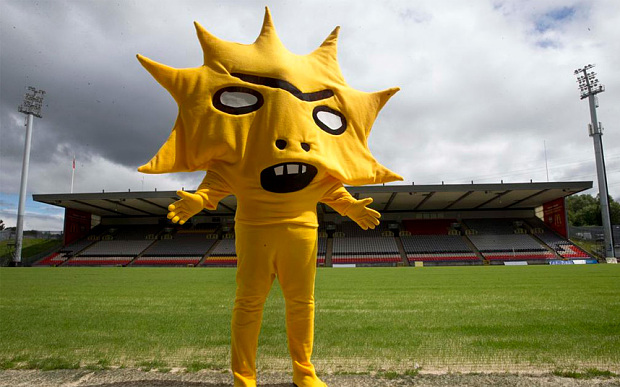 So I'm watching an old episode of "8 Out Of 10 Cats Does Countdown," and Holly Walsh introduces her mascot as an actual mascot --- Kingsley, the new face of Partick Thistle F.C., a Scottish football team.  I laughed at the joke, and laughed even harder when I looked it up and realized that it wasn't even a joke.*  This was the REAL mascot for Partick Thistle, and apparently I've been living under a bridge somewhere since Kingsley's introduction three years ago (as you might expect) created a huge social media buzz.

* = I realize that Walsh stressed it was genuine several times, but you really can't anything said on this show at face value.  For instance, Sean Lock probably isn't actually a cranky psychopath who would happily erase people, Thanos-style.  Probably.

Needless to say, I couldn't be more delighted by the fact that a professional club decided to fully embrace goofiness in such an overt way.  There's technically a theme behind it, as the designer has claimed that Kingsley represents the angst of being a fan of a Glasgow team that isn't Celtic or Rangers, but let's be real, everything about this project is done with tongue in cheek.

Since, if you're Thistle, why not?  I daresay that Kingsley generated more publicity for the club than anything else in its 142-year history.  Let's face it, beyond Celtic or Rangers, it's very easy for a Scottish football team to get relegated to obscurity.  (Or, simply relegated.)  If pressed to list Scottish teams aside from Celtic and Rangers, I could only name Hearts and Dundee due to general knowledge, Inverness Caledonian Thistle due to their famous upset over Celtic and the subsequent incredible "Super Caley Go Ballistic, Celtic Are Atrocious" headline, and now Partick Thistle, based solely on Kingsley's existence.

More teams should jump on board the bandwagon.  For instance, it should be noted that Partick's most common nickname is "the Jags," so a sun is a completely bizarre choice for a team that has little-to-no relation to anything solar, beyond their red-and-yellow uniforms.  Ergo, the Jacksonville Jaguars should also adopt a crazed sun as their mascot, replacing Jaxson de Ville.  Perhaps Jaxson and Kingsley should battle it out to determine mascot supremacy, with the loser replacing Blake Bortles as the team's quarterback.  Come on, which sounds like a better QB name --- Blake Bortles, or Jaxson Kingsley?
Posted by Question Mark at 7:36 PM