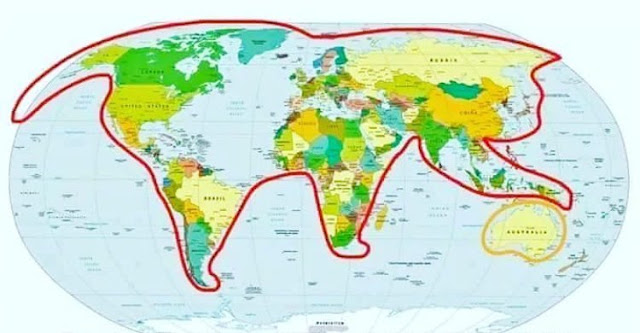 As found on Twitter, the world is just a cat playing with Australia as a toy.  Vancouver doesn't come off great in this situation, but given the Canucks' recent record...

I went my whole life without really knowing anything specific about the premise of the Mighty Morphin Power Rangers, and I'm stunned to learn that it involved five robots joining together to form a larger robot.  Originally I thought that the creators of Voltron would have license to sue the MMPR people into the ground, but hold on!  My friend Craig informed me that the Voltron animated series we all (?) knew and loved from childhood was "actually based on clips cut from more than one earlier Japanese cartoon as a sort of mash-up.  So Voltron likely wouldn't be able to sue anyone for this idea, since it wasn't their idea to begin with."

Wait, so the Voltron series ITSELF was several cartoons joining together to form a larger cartoon?  This is getting pretty meta.  This is like learning that Bob Kane dressed up as a bat to fight crime.

I have seen the original Ghostbusters movie at least 100 times, yet I only just now realized that during the end credits, Janine is the woman who hugs Egon when they’re all leaving the haunted/trashed apartment building.  I am observant!

I love that a) Bert from Sesame Street has a Twitter account, and b) he has "RTs do not equal endorsements" in his bio.  Typical cautious Bert, he won't let himself get hijacked by any memes!

Speaking of Sesame Street Twitter accounts (and I may literally be the only one who speaks on the topic), I'm happy to report that the Count has been steadily continuing his tweeted journey to infinity since September 6 of last year.  Perhaps not coincidentally, my last post calling out the Count's latest unexplained Twitter hiatus came on September 5, so I like to think that I shamed him into action.  Interestingly, the Count has been tweeting multiple times per day as of late, so perhaps he's either making up for lost time, or maybe he's speeding up to reach a specified number by a specified date.  Or maybe the Count knows something that we don't know.  Is doomsday approaching?  Is that doomsday for humanity, or just a vampire-centric end of days?  (i.e. the moon turns to garlic)

In other updates from past posts, you can add "Coco" to the list of movies that made me actually cry.  That final scene with the boy and his grandmother was just phenomenal....a good three-quarters of the theatre was openly weeping.  Let me tell you, it's very hard to properly see a screen when you've got 3D glasses on AND you're trying to wipe tears from your eyes.

The full list is now Coco, A Monster Calls, Up, Rudy, and E.T.
Posted by Question Mark at 2:02 AM