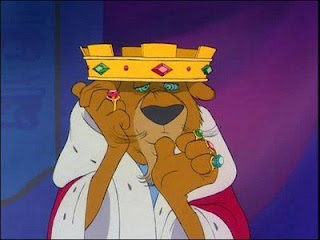 This is an anecdotal example of “King John’s” obscurity within the Shakespeare canon, but in my quest to seek out and purchase copies of the plays I didn’t already own, KJ was the only one that apparently wasn’t available as a stand-alone text.  As in, the copy I bought was packaged together with “Henry VIII” in a solo volume, which I figured was a better bargain than buying a stand-alone edition of Henry VIII.  Shrewd!

Maybe it’s appropriate that the play that so prominently features a bastard is also essentially the bastard stepchild of the history plays.  I’m not entirely sure why this is the case, given KJ’s general quality.  Maybe because it is set a few hundred years earlier than the other nine plays* and lacks the historical connect of the War Of The Roses, KJ is seen as a bit of an odd text out.  Maybe it’s also because, as one author theorized in a text I read, that the two most famous elements of King John’s life aren’t even obliquely referenced in the play.  If you’re a theatregoer in the 1590’s attending a show called “King John” and there isn’t even an oblique reference to either the Magna Carta’s signing or John’s apocryphal feud with Robin Hood**, I can see some disappointment amongst the punters and a lack of enthusiasm about the production.  It’d be like going to see a movie about Ronald Reagan that doesn’t mention his presidency or acting career.

* = it should be noted that I’m not including Edward III as part of this re-read, even though many scholars believe Shakespeare had some part in its writing.  I mean come on, this project is already approaching its seventh year; if any more plays get added to my list, I’ll be here until the 2030s.

But overall, I enjoyed the play, even if the whole thing sort of peters out by the end.  It’s almost like Shakespeare himself got bored with the idea or was facing a deadline or something — the early acts are dominated by these big, long, elaborate scenes but then the fifth act is just seven short scenes.  They’re really almost vignettes that rather hastily wrap things up, with many important details strangely left off-stage (i.e. the actual poisoning of the King, the deaths of Elinor and Constance an act earlier) and the audience only left with the melodrama of Arthur’s death and the ever-shifting loyalties of the English noblemen.

The real issue might be a shift in tone.  The last half of the play seems to want to “get serious” after Shakespeare has had a lot of fun with political satire in the opening acts.  If that vibe had been kept throughout, KJ might’ve really blossomed; it isn’t hard to see why some modern productions lean hard on the plot’s dark comedy aspect.  The entire sequence of the kings of England and France trying to curry favour with the random citizen representative from Algiers is legitimately hilarious.  The citizen’s whole “we are all loyal to the king of England, obviously…and once you two figure out who that is, we’ve got your back” attitude is Pythonesque in its attitude towards royal authority.  John, the King and Dauphin Of France, and poor little Arthur all act less like contenders for the throne than a series of cranky children being forced into auditions by stage mothers.

Into this mix we get Sir Richard The Bastard, who goes from being an Iago-in-training to becoming the voice of the audience in commenting on the royals’ silliness, though Richard himself is a comic figure due to his own simplicity.  He is initially presented as an upwardly-mobile Littlefinger type who is prepared to leverage his newfound status as best he can, only a) he seems constantly taken aback by everyone else’s political machinations, and b) his only actual plan is just “let’s all go to war, and presumably we’ll win.”  Richard is another character in power that is less national powerbroker than a playground oaf; his repeated “calf’s skin” taunts towards the king of Austria are both a great running gag, and also a sign that Richard isn’t exactly the sharpest wit in the land.  Of course, this also adds to the emptiness of the last two acts, as the audience is then expected to sort of side with Richard throughout the whole Arthur-and-Hubert drama.

There’s enough interesting stuff in the first couple of acts to overall merit a thumbs-up, though I’m sort of hoping that KJ indeed proves itself to be the weakest of the history plays as we enter this ten-play segment of the re-read.  I will be going in historic chronological order of the figures involved, so you’ll probably be able to predict entries #22-30 (though a curveball could be in there somewhere, potentially).  Given my lack of haste in reading and writing these things, the second half of my King John/Henry VIII edition might yet have a long way to go before I can safely place it back into my collection.

“Collection?  Don’t you mean the shelf in your old bedroom in your parents’ house, next to the Calvin & Hobbes books?”

My New Year's resolution for 2012 was to re-read (and in some cases, read for the first time) all 38 of William Shakespeare's plays.  2012 has long since ended, but still, onward and upward.  And, since in these modern times it's impossible to undertake a personal project without blogging about it, here are a series of reviews/personal observances I'll make about the plays.  Well, 'reviews' is a bit of a stretch.  It's William freakin’ Shakespeare.  What am I going to tell you, "Don't bother reading this one, folks!  What a stinker!  Ol' Mark doesn't like it, so you should definitely believe ME over 400 years of dramatic criticism!"
Posted by Question Mark at 3:16 PM