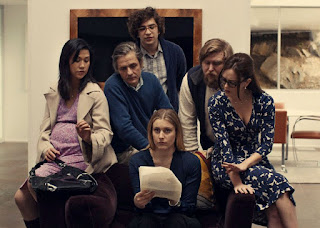 I could watch Greta Gerwig read a phone book*, so it’s no surprise that I enjoyed “Mistress America.”  It’s a flawed movie that could’ve probably used one final script polish, yet man, Gerwig.  I’m hard-pressed to think of an actress that is both so overly performative in her acting style yet absolutely natural about it at the same time.  Her default acting style is “who would ever act like this in real life?” and then I can think of at least three people I know in hipster Toronto that absolutely act like that in real life.

* = a phone book, kids, is this big government-issued book that contained the phone numbers of everyone in the city.  Yes, this sounds impossibly convenient.  No, people couldn’t have just kept all that information in their smartphone’s address books because…sigh, never mind.

It’s quite possible she doesn’t have anything in her acting wheelhouse other than being a somewhat flaky woman living in New York or Los Angeles, but who cares.  Many a character actor has done great work with fewer arrows in their quiver.  If anything, the thought of a middle-aged Gerwig rocking the flaky city dweller persona into middle age makes me happy — can’t you see her racking up funny supporting part after funny supporting part like a modern Teri Garr?

Between this film, the great Frances Ha, and Damsels In Distress (the only one of the trio she didn’t co-write), Gerwig is carving out a niche of academic comedies.  There’s more than a bit of Woody Allen inspiration in there, but again, who cares.  Shouldn’t the world be happy that we can watch a Woody Allen-style comedy without actually having to mentally deal with Woody and all of his creepy barrage?

Allen also hasn’t written a scene in years as funny as Mistress America’s entire sequence of Brooke and the kids showing up at Mamie-Claire and Dylan’s house to more or less beg for money.  It is very, very hard to write farce, and even harder to write farce that doesn’t self-consciously acknowledge itself as farce.  This scene is not just the backbone of the movie, it almost could’ve been a movie unto itself, or at least a one-act play.  All eight (eight!) actors get multiple chances of score to wonderful lines or facial expressions, even the semi-bit part of the put-upon neighbour who at first I thought was Matthew Rhys in yet another wig but it was instead just a guy who looks like that.  Mistress America meets Mr. Russia?

Put it this way, I actually went to see the Russell Brand ‘Arthur’ remake just because Gerwig was involved.  Arthur, for god’s sakes.  (Yes, she was easily the best part of the movie.)  Greta, I’m pot-committed at this point, so please keep using your powers for good and not for…well, not evil, but ‘less good’?  How do I feel about Russell Brand?  Do I literally steal an old Mad Magazine joke and refer to him as Brand Ecch?
Posted by Question Mark at 6:37 AM