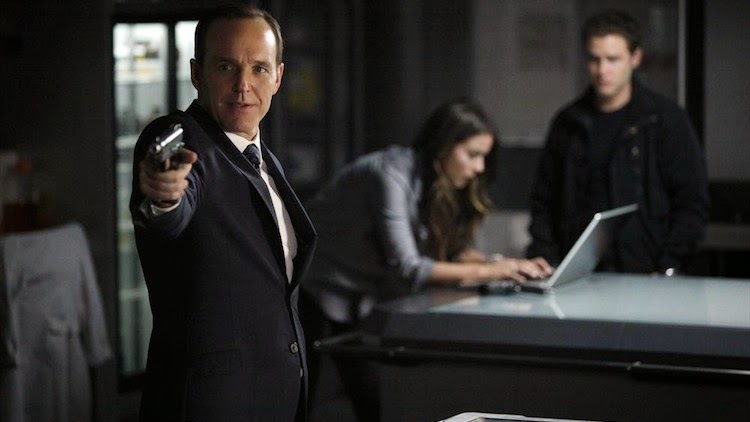 Marvel's Agents of S.H.I.E.L.D. was far from a perfect show in its first season, yet its biggest problem was how a lot of misinformed/misguided internet buzz makes it seem much worse than it actually was (a.k.a. "Girls" Syndome).  Let's take a look at the fanboys' biggest problems with the program and see how closely they corresponded to reality…

* The characters aren't interesting!
True in the beginning, not really true (though not totally false) by season's end.  We all had a lot of built-in love for Agent Coulson from the Marvel movies, so Clark Gregg was given a pass, though I'll deal with my own issues with his character later on.  Besides Phil, Son Of Coul, however, there admittedly wasn't much to work with amongst the five other cast members.  Too conventionally TV-attractive, too generic personality-wise and, weirdly, there seemed some unnecessary doubling.  Did the cast really need two emotionally-closed off asskickers, or two chatterbox techies from the U.K.?

As the season progressed, however, we got the ol' "show, don't tell" technique used to inform us why, exactly, Skye was such a brilliant hacker worth caring about or why FitzSimmons was such a two-headed science monster with actual chemistry, etc.  Ward turning evil made his character 100 times more interesting and cast his earlier characterization in a whole new light.  Things are still not perfect, of course, as I still feel like this show is one or maybe two really good characters away from taking off.  Part of the problem is Coulson, who is a terrific supporting player but not quite enough of an inherently interesting personage as a lead; the same could be said of Gregg, who often kills it in supporting parts but has made some weird acting choices   on this show.

The thing about the cast, however, is that it seems to be very much in flux as we head into season two.  I see no way Ward can possibly still be in the regular cast, and Agent Triplett seems to have taken his place as the crew's designated special ops asskicker.  Fitz didn't die, yet apparently suffered some sort of trauma that will limit him; while I don't see Iain De Caestecker being just cavalierly written off, his character's status is a big question mark for S2.  It looks like we'll get Patton Oswalt in at least a minor recurring role (awesome) as the assistant helping the crew restart the new SHIELD, and rumours have persisted that Cobie Smulders as Maria Hill will join the cast now that 'How I Met Your Mother' has wrapped up.  The bottom line is that the AOS cast doesn't seem like a finished product so if you still have worries, they could be answered a few months into 2015.  It's also worth noting that Angel, another Joss Whedon show, didn't really get its full regular cast in place until the start of the third season, so some juggling is to be expected from….hey wait….

* This can't hold a candle to Joss Whedon's other shows!
Well, no kidding, that's because it isn't a "Joss Whedon Show."  While Joss is the EP, the showrunners are Joss' brother and sister-in-law, so while I'm sure he has creative input, it's not his baby.

It is interesting, however, to note all of the Whedon flourishes that popped up in the first season alone.  Ward's character basically covered all the Buffy boyfriend bases in one year, going from a generic Riley type to (after his Hydra heel turn) a human version of Angelus.  Obviously the whole idea of cybernetically-enhanced super-soldiers is a comic book staple that long predates Whedon's shows, but you couldn't help but remember Adam, the much-maligned Buffy villain.  Similarly, Lorelei's character came off a lot like either Glory (from Buffy) or Jasmine (from Angel).  The design of the SHIELD plane, particularly the cargo bay, bore a striking resemblance to the Serenity.  In fairness, a lot of Joss' great ideas have been done in past shows -- he wasn't reinventing the TV wheel, just rolling it in a particularly clever new way -- so it could be I'm just reaching a bit to find comparisons where none truly exist.  It's not like you suddenly saw Amy Acker or J. August Richards pop up in…aw, come on!  (This is totally a joke, btw, I love both actors.)

* The "monster-of-the-week" plots aren't interesting!
Can't really argue here.  By far, the highlight of the first season was the ongoing Centipede/Clairvoyant storyline that really kicked into high gear once SHIELD itself fell to Hydra (after Captain America 2 hit theatres).  There were some callbacks to those one-off episodes that tried to make it seem as though every episode played a small role in the agents' story, yet honestly, most of them didn't work.

Uh, I realize I just spent a whole paragraph saying how this isn't a "Joss Whedon show," yet now I'm going to compare AoS to Dollhouse.  You might recall that Dollhouse's first few episodes were also standalone "case of the week" adventures, which Joss felt were necessary to establish the complicated premise and (perhaps the real reason) because FOX felt they were easier jumping-on points for new viewers.  Joss openly admitted that Dollhouse didn't really get good until the fifth episode, and he was right --- with the premise established, that's when the interlocking plot got off the ground and that underrated show hit its stride.  I think the influence of both ABC and Marvel Studios will keep such a high profile show from ever being too mythology-driven, yet clearly a few big arcs have yet to be completed.  Skye's father, for instance, might well be the Big Bad of the next season.

* There aren't enough Avengers tie-ins!
C'mon, did you really think we'd see Robert Downey Jr. or Scarlett Johansson making regular cameos?  Frankly, I'm stunned Sam Jackson even made a couple of appearances, though given the depth of that huge long-term contract he signed with Marvel Studios, he may be obligated to appear in every Marvel project until the end of time.

* Okay, fair point on the Avengers stuff, but…there aren't enough Marvel tie-ins in general!
This is perhaps my biggest pet peeve with this show's online critics.  The best version of AOS is a show that is both entertaining and makes the most of its heritage in calling on the huge bench of major and minor Marvel characters.  The worst version of AOS is a show that isn't any good and basically forgets it's even related to Marvel.  What we ended up with was a show that was overall pretty decent and pretty related to the Marvel mythos, yet that wasn't enough for some of the fanboys, who seemingly expected a different random comic character to be featured in virtually every episode.

Doing this, however, would've been nothing more than overt fan service.  As noted earlier, AOS is a major mainstream television project for ABC and Marvel, and it's essentially become the harbinger for several other Marvel TV series coming to both ABC and Netflix over the next couple of years.  The key word is 'mainstream,' as Disney wants to appeal to as broad an audience as possible.  The first order of business is to draw in the casual viewers, as Disney knows it can likely rely on the hardcores to watch anyways, even if it's to hate-watch.  There are just enough bones thrown to the hardcore crowd to keep them satisfied, such as how this AV Club reviewer basically wet himself with joy over a random mention of Man-Thing.

Too many of the online comic book crowd spent so much time criticizing AOS for the show they wanted it to be that they didn't appreciate it for the show it is.  It's quite possible we get that full-on TV version of the Marvel Universe in future seasons now that the show has gotten its feet wet, but in the meantime, let's enjoy AOS as a B-level adventure show whose best days are likely still ahead.  I saw enough things I liked in S1 that Agents of SHIELD will still be on my viewing schedule in the fall, as I'm taking the glass half-full approach on this one.
Posted by Question Mark at 2:30 PM