Senses Of An Ending 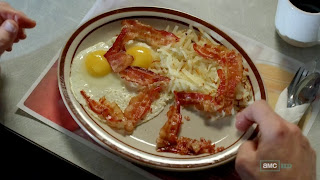 (If you're a Julian Barnes fan who surfed onto this page and are confused by the post title, click here for an actual analysis of Barnes' novel.)

I think, if I could've had a say in remaking Breaking Bad's fifth season over, I would've done it without the flash-forwards.  Due to the two glimpses we got into Walt's future, we knew that Walt would be a) still alive by his 52nd birthday, b) in possession of a big-ass machine gun, c) be living under an assumed name, d) his meth business would have been publicly found out, e) the Whites' home was condemned and Skyler/Flynn/Holly were god knows where, f) the ricin hadn't yet been used.

As oblique as the flash-forwards were, this actually ended up being a lot of information and it allowed a number of fans and pundits to correctly predict most of Breaking Bad's final episode.  It seemed a bit too simplistic for a show that reached great heights by always giving the audience one most unexpected, yet totally logical twist.  In this final season alone, we had incredible, "holy shit" twists like Walt's blackmail video for Hank, Walt temporarily kidnapping Holly and Walt's bitter revelation about Jane's death, delivered solely to spite Jesse at his lowest moment.  The finale lacked those kinds of major surprises, aside from perhaps the laser targets suddenly popping up on Gretchen and Elliott.

I wouldn't have even minded the flash-forward footage being used, but just in the finale itself and not months earlier so we all had a chance to put the clues together.  Once Walt gets the machine gun, you figured he was going to lay waste to Uncle Jack and the gang, but if we have just 30 minutes or so to process that info, that's better than several months of waiting and making it almost anti-climactic.  Same with the ricin --- imagine we had almost forgotten about that stuff and THEN gotten the scene of Walt telling Lydia she'd been poisoned.  (It was very unlike the show to actually have Walt spell out his tactics to her, by the way.  I think most viewers had figured out what had happened simply by the closeup of the Stevia package and her putting it into her tea.  Also, I'd love to be a fly on the wall at Stevia's marketing department today.)

So I would've liked one more surprise, and more Walt/Jesse interaction, from the Breaking Bad finale.  Aside from that, it was a perfectly good last touch on this story and it capped off one of the greatest final seasons of any show in television history.  I wrote months ago that if Breaking Bad could "stick the landing," it would probably have a case as the greatest show of all time.  The Wire had the journalism subplot that weakened its final season, Sopranos had the confusing final few minutes of its last episode, Seinfeld's last episode was widely derided, and several other great shows that simply run out of steam altogether by their final seasons or have long since jumped the shark.  Breaking Bad was great from start to finish.  I'm not sure if I'd quite rank it as #1 overall but it's definitely in the conversation.

Going back to those narrative twists, they helped Breaking Bad achieve its greatest trick, which was simply living up to everyone's expectations.  Think back to when LOST ended and how its finale had an impossible amount of pressure put onto it.  In hindsight, LOST's creative team wasted too much time in that final season and left the finale having to answer a ton of questions, so instead the show just gave everyone a nice ending and wrapped up at least the sixth season's narrative, if nothing else.  That's all well and good, except for future viewers who may be turned off by catching up on LOST via DVDs or Netflix since their friends will have warned them that "ah, it's not worth it, the ending isn't very good."

Breaking Bad won't have this problem.  It's a complete story from beginning to end, with nary a dull episode in the bunch, let alone a bad arc or something that stood out as a glaring digression or weakness to the overall story.  I mentioned earlier about some great shows that petered out by their finales, while other very good shows that fell just a bit short of greatness overall (i.e. The Shield, Newhart, Six Feet Under) are remembered more fondly because they all had amazing final episodes.  Breaking Bad had both --- it got off to a roaring start, had the incredible Gus Frings for the middle and then ended on a major high note.

Since we're discussing final TV seasons, holy shit, let's talk about Dexter.  Take everything I said about Breaking Bad and just reverse it 180 degrees for my feelings about Dexter's already-infamous final season.  It may have already become the new standard for A Bad Ending for a TV show.  You'll be watching a future show, it'll start getting shaky in its last couple of years, and when they announce its upcoming season will be its last, you'll be all, "uh oh, let's hope the show doesn't pull a Dexter."

Put it this way, if you're a Dexter watcher and a friend of yours who's never seen the show is showing some interest, you have a moral duty…nay, an OBLIGATION to firmly tell them to stop watching after four seasons and the end of the Trinity Killer storyline.  Stopping there would allow them to leave the Dexter experience on a high note, and you'd be sparing them the F-minus sixth season and the F-minus-minus eighth season.  (S5 and S7 were both good but not worth going out of your way to see.)  Let this show about a serial killer inspire you to more humane towards your TV-watching pals.  Friends don't let friends watch Dexter's final season.
Posted by Question Mark at 7:57 PM