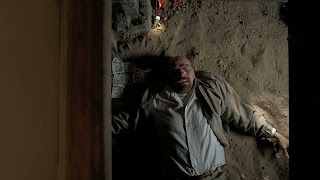 The moral of this year's Alterna-Emmys: I REALLY need to start watching more dramas.  My pickings in that department are very slim, so I'm largely forced to just accept the Academy's nominees, which is never a good sign.

I don't watch BE, DA or GoT, so I have no quarrels with their inclusion given that they're all supposed to be excellent.  I personally would've put the incredible Sherlock on the list, but it's listed as a miniseries under Emmy rules, which I guess makes sense.  Starting to think I should add Downton Abbey to my ever-growing list of shows I have to get caught up on.  Of the three shows I do watch, I'd give Breaking Bad the nod over Mad Men and Homeland.  It's odd, Mad Men has a seemingly unbreakable streak as Best Drama while Bryan Cranston is similarly unstoppable as lead actor.  Maybe this year BB gets the big prize while Jon Hamm takes the acting award, as both are ever-so deserving.

The Emmys always seem to be a year late to the party, so I'll predict that Danes (far and away the critical favourite for this award and my personal hands-down choice) gets snubbed in favour of another trophy for Margulies.  Nothing against Margulies or whomever else might win this, but Danes is clearly the most deserving candidate this season, though I suppose I wouldn't get too upset if Moss finally got her overdue Emmy.  Jessica Pare submitted herself in the lead actress category which struck me as a bit odd, since if you had to pick a female lead on Mad Men, it's clearly Moss.  Pare probably could've gotten a nomination as supporting actress and it also cost her the Polivision Alterna-Emmy in that category.  C'est dommage.

It's possible that Cranston's one-year absence from the category (BB didn't air during the 2010-11 voting period) may cause some voters to look elsewhere, but realistically, Emmy voters will take a nod from Breaking Bad's fifth season marketing and will hail the king once again.  It's very possible that Don Draper will go down as one of the best roles to never win an Emmy, though amusingly, Hamm was nominated for the 'guest actor in a comedy' Emmy for his role on 30 Rock's live episode.  Five years of Draper might not be enough to get Hamm an Emmy, but "BANJO" might?

As I understand it, Smith's role on Downtown Abbey consists of her just making witty cutting remarks to everyone and everything in sight.  Sold.  I'd otherwise give it to Hendricks, if for no other reason than that scene between Joan and Don flirting with each other at the bar was so hot that I think I went through puberty again just watching it.

As always, this is one of the toughest categories of the bunch, so when in doubt, I'll just pick the guy who won last year.  The actual winner, needless to say, should be Esposito --- even without seeing Downton Abbey or Dinklage's (no doubt great) performance, I find it hard to believe that anyone could top Esposito as the legendary Gustavo Fring.  Esposito's performance seems to be lauded enough that he'll take the actual prize home, but who knows on Emmy night.  It's a pleasant surprise to see Harris get nominated but I'm stunned that he got the 'Mad Men slot' over Slattery, who's been nominated four times before and turned in probably his best work this past year.

Interesting mix here as we got seven nominees instead of the usual six.  As always, Poehler *should* win, though the lack of overall Emmy love for P&R (more on that later) makes me think she'll get snubbed again.  Emmy voters bit hard on Girls, so my guess is that of Dunham's multiple nominations, she'll score here, though it's very possible she gets a directing or writing Emmy while the acting award goes to a more polished veteran like Louis-Dreyfus.  Or, they'll just give it to Edie Falco again despite her show not actually being a comedy.  Whatever.  The other drama here is what gimmick Poehler will come up with for the nominees on Emmy night, following 2009's eyewear and last year's beauty pageant.  My guess: they all shotgun beers.

It occurs to me that most of my favourite comedies are ensembles that don't really have a clear lead actor, but still, it's not hard to come up with better choices than goddamn Jon Cryer or Jim "Yeah, We GET IT ALREADY" Parsons.  There is a one-in-three chance that the Emmy will go to a comedian playing a twisted version of himself, but I can't see either Louis CK or David winning simply because too many actors will turn up their noses at the idea of these "non-actors" beating "real" actors.  I think I'd vote for one of them just to hear the speech.  A note on Arnett and Applegate: while Up All Night was a flawed and ultimately uninteresting show, they both had boatloads of chemistry with each other, so what the hell, I'll nominate them.

Aha, we have the first completely different alterna-ballot.  I guess I don't have any real issue with the actual nominees (particularly enjoyed the nod to the recently-departed Joosten) aside from the fact that they weren't the six best available supporting performances.  Though it's very obvious that IASIP isn't close to the Academy's taste, Olson should have at least a couple of supporting actress Emmys by now.  Going by the theory that voters are completely in the tank for Modern Family and are cycling through that show's cast for awards, I'll say this is Vergara's year to get the trophy.  It wouldn't be a shock to see the Emmy go to Joosten (sympathy), Bowen (won last year), Wiig (as part of the ongoing Kristen Wiig lovefest) or Bialik, since people love that stupid show.

Another hella-deep category, as I had to leave out the Community guys, Steve Little (Stevie on Eastbound & Down), Rob "Fat Mac" McElhenney and several other worthy nominees.  Going by my previously-stated theory, this should be Mitchell or O'Neill's year, and it would be admittedly awesome to see a lowercase-L TV legend like O'Neill finally take home an Emmy.  As I've said before, I like Modern Family and think it's a good show, but it certainly doesn't need to be flooding the comedy categories every year and winning everything in sight.  I'd give it to Greenfield for breaking out and making New Girl more than just a Zooey Deschanel vehicle…also, I can never pass up an opportunity to award a Veronica Mars alum.  Hader's nomination is interesting, and again, it's too bad SNL actors getting nominations is only a recent thing, since you'd think someone like Will Ferrell would've gotten a couple of Emmys on his shelf back in his heyday.

Might as well predict a threepeat for Modern Family, since the best candidate to unseat the new dynasty is the old dynasty of 30 Rock, which might be seen as been-there, done-that.  It's interesting that Louie didn't get an actual series nomination despite several noms in other categories, which could simply be chalked up to the fact that the show is only partially a comedy.  And really, though I myself didn't think Parks & Rec had a truly upper-tier season, it still absolutely deserved at least a damn nomination.
Posted by Question Mark at 3:30 PM