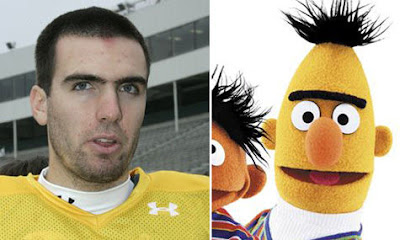 Oh Joe. Joe, Joe, Joe, Joey Joe Joe Junior Shabadoo. I'm referring to Joe Flacco here but it nicely works out that I could also be referring to Flacco's agent Joe Linta, who recently said that he's looking for his client to be paid like a "top-five" quarterback in contract negotiations with the Ravens. This is a negotiating ploy. By god, it has to be a ploy, since no sane-thinking human (even an agent) would try to claim with a straight face that Joe frickin' Flacco is one of the five best quarterbacks in the NFL. Linta is saying top-five but he's no doubt willing to settle for 'top 10' money….though even that is a stretch.

A quick list of NFL quarterbacks who are better than Joe Flacco:

These six are unassailable. If you think Flacco is a better QB than any of these six, you're flat-out bonkers. You can slot the top three in whatever order you wish, then argue all day about who's better between Big Ben and Everage Eli, but I think these six are pretty universally considered to be the best six QBs in football. In Peyton's case, of course, it depends on his health, but if healthy, Peyton is obviously a top-tier guy. And, frankly, if someone made you play a football game for your life right now and you could only pick between Peyton Manning and Joe Flacco as your quarterback, I think most people would ignore the neck injury and pick Manning anyway. If the two were at full health….no contest. Not even Flacco's mom would pick her son under those circumstances.

Now we get into the next tier.

Realistically you'd have to put the Peyton "if healthy" asterisk next to Stafford, Schaub and Cutler, but at 100 percent, all three of these guys have much higher ceilings than Flacco. In these three QBs' hands, their teams' passing games are actually threatening. In Baltimore, the passing game is occasionally threatening but is still considered as "that thing the Ravens do in between handing the ball to Ray Rice and having their kicker miss hilariously short field goals."

Seems crazy to put Newton on this list after just one season, and it seems crazy to consider Rivers any kind of elite-ish QB after struggling all year. But, consider this: Rivers threw for 27 TDs and an 88.7 QB rating in his 'bad' year. Flacco FOR HIS CAREER has a QB rating of 86.0 and has never thrown for more than 25 TDs in a season. The numbers seem to bear out that Rivers at his worst is borderline better than Flacco at his best. Ouch. As for Newton, sure it's just been one year, but man, what a year. Asking the question, "Which QB is better right now, Flacco or Newton?" will net you a 50-50 response at best for Flacco, and probably Newton wins that poll. If you ask "which QB would you rather have?" (a question that better encompasses the future) then Newton wins hands-down.

We've already hit 11 quarterbacks on this list, by the way, so any thought of Flacco even as a top-10 QB in the league is faulty. Now, however, is when Flacco could show up.

I'll give Flacco credit for one thing, he's consistent. He's never going to wow you and he's never going to completely crap the bed --- he'll just keep plugging in borderline above-average performances every time out. This fits into Baltimore's conservative offensive philosophy, though I'll argue that the Ravens limit themselves (and keep themselves from ever winning a Super Bowl) by continuing to settle for "rich man's Trent Dilfer" quarterback play in an increasingly pass-oriented league.

Vick, Romo and Ryan are the opposite of consistent. For three or four games a year, Vick plays like the most unstoppable force in football. For the other 15 games, Vick is either injured or making crappy decisions. If you're an Eagles fan, you live a frustrated life as it is, but it must be especially dicey to just roll the dice through the season and then hope that Vick saves one or two of his 'big' games for the postseason. As for Romo and Ryan, they're basically in the same boat as good quarterbacks in the regular season who turn comically inept in big-game scenarios. Romo has the most high-profile failures, but let's not overlook the fact that "Matty Ice" is 0-3 in playoff games, with the last two of those being blowouts (in fairness, against the last two Super Bowl champions). I also stuck Dalton on the list since he had a more-than-solid rookie year and still has room to improve, though I'd take Flacco over him right now.

Since I enjoy consistency, I'll slot Flacco as the 13th best quarterback in the NFL. It's at least conceivable to see a Vick-led team win the Super Bowl (if the Eagles catch lightning in a bottle), or even a Flacco-led team (if the Ravens' formula of defense and running isn't as outdated as it seems). I find it much harder to conceive Romo or Ryan suddenly leading their teams to championships, though in Ryan's case, maybe there's also some room for growth.

So there you have it. Top-five quarterback, my ass. If I'm the Ravens, I'm seriously wondering if I should even explore giving Flacco an extension, since why give Flacco a ton of money and continue playing the "well, let's hope Joe does just enough to win" game for five more seasons when you could try to find a QB who's actually a threat. Matt Flynn, for instance, is a free agent. If Peyton Manning is actually healthy and the Colts cut him…yikes, that would be something. Baltimore also just hired Jim Caldwell as the quarterbacks coach, which may be a hint.

"Mark, did you write this entire post as a response to your Ravens-loving brother, who thinks Flacco is a terrific QB because of his win-loss record?"