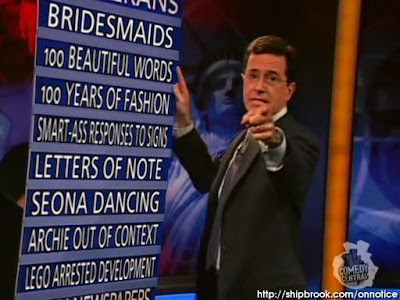 Rather than pad out my post totals simply by linking to each of these in separate blogs, I figured it would save time to just put you all 'on notice' about these links in one fell swoop. Look at this efficiency!

Did you enjoy that scene in Bridesmaids when Kristen Wiig argues with that snotty teenager at the jewelry store? If so, well, here's a full 10 minutes of it. "Two years, it was fun, and look at me now." As much as I'm over Wiig as a Saturday Night Live cast member, I find her weirdly entertaining as anything aside from an overdone SNL character. Like, 10 minutes of juvenile insults? Sold. Two minutes as that hammy Broadway star in the 'Secret Word' sketch? I want to shoot out my TV like Elvis.

The 100 most beautiful words in the English language. I call horseshit on this list due to the omission of….well, "horseshit." What a beautiful, rich sound. The two competing S-sounds in the middle of the word create a lovely gushing effect. 'Horseshit' could've easily taken the place of 'tintinnabulation' or something. Ugh, what a dreadful, tinny word!

Keeping with the top 100 idea, here's a montage of 100 years of East London fashions. This is not to be confused with 29 years of West London fashions, which is just a video of me wearing every t-shirt I've ever worn in my life, from No Fear to my homemade green-and-black question marks Riddler shirt.

Really, the London thing has nothing to do with it, since it's basically just a montage of how fashion has evolved through the last century. It's a clever idea for a video, certainly impressive from a costuming and technical standpoint, and it makes me kind of wish I'd been alive in the 1920's. Just as long as I could time-travel out before the whole Depression thing. Would've gotten depressing. 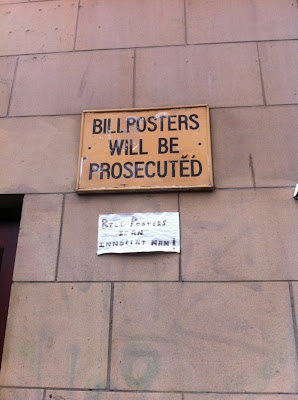 Brilliantly smart-ass responses to completely well-meaning signs. This page is the gift that keeps on giving. I only just realized, surfing to it again for this post, that it's continually updating, so you can keep going back and checking out even more funny signs. It's also possible that the hanging 'do not walk' man is a Banksy.

Every so often you see a website go from zero to 60 seemingly overnight. Letters Of Note has been operating for over two years now in relative anonymity, yet in the last month suddenly it's exploded. I'm seeing links to a 'Letter Of Note' on a near-daily basis on any number of other sites.

The premise is simple: Letters Of Note reprints and scans letters, postcards, and other sorts of correspondence from various famous and notable people on a variety of subjects. It has everything from Matt Stone writing the MPAA about some changes to the South Park movie to David Bowie's hilariously cheerful response to his first piece of American fan mail to Richard Nixon's backup speech in case the Apollo 11 mission went awry, reprinted below. There is no shortage of fascinating material on this website. It might even have a copy of my letter to Santa Claus in 1986 where I asked for Apple stock. (Didn't get it…thanks for NOTHING, Santa.) 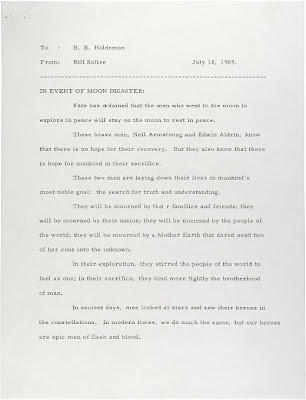 Speaking of David Bowie, here's a clip of a music video by Seona Dancing, an early 1980's synth/pop band from England. Needless to say, these guys are heavily, heavily influenced by Bowie, especially that lead singer, who's doing everything possible to ape Bowie's look. Man, what a clown. I wonder what ever happened to that guy….

….oh, wait, it's RICKY GERVAIS. I shit you not. Gervais, to his credit, has poked fun at his old pop star past and frankly, it benefits him that this video still exists, since he might see it as proof of the non-existence of God. 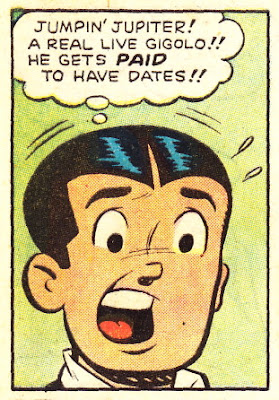 Archie, Out Of Context. Yep. 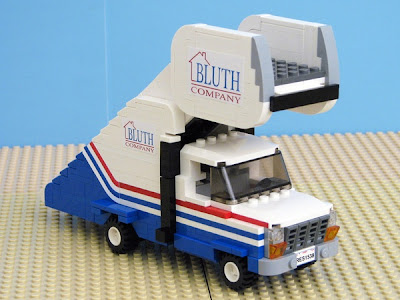 As a huge Arrested Development fan (it's the only TV series I own on DVD), I can't help but enjoy this recreation of the show in Lego. Also, as a huge Arrested Development fan, I can't help but notice that this link doesn't include any mention of the AD movie, so I'm unsatisfied! Wait'll I register my displeasure on an internet message board, that'll sure show Ron Howard!
Posted by Question Mark at 4:22 PM