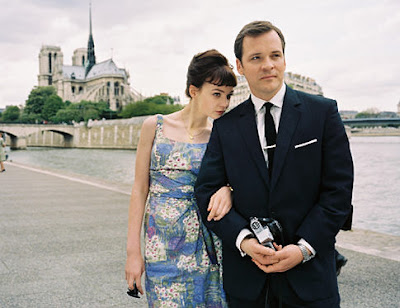 As a former film major, I can recognize a good essay topic when I see one. Coming soon to a cinematic gender studies class at a university near you, some enterprising young film student will concoct a piece titled "Swimming Upstream: Portrayals Of British Femininity In Opposition To A Male-Dominated Culture In Fish Tank And An Education." Hell, maybe they can even toss a Jane Austen film in there to really connect it up through the ages. (I'm well aware that this title sucks, by the way. The worst parts of my papers were always my titles...at least, that's what I tell myself. My professors might've argued otherwise.) The long and short of is that Fish Tank and An Education tell remarkably similar stories in very different fashions. Both films are about teenage women growing up in England, falling for older men, and trying to carve a niche for themselves in a world that doesn't seem to want to make room for them. Now, not being a young woman growing up in England, I can't really directly relate to the situation, so therefore my opinion of both movies is largely coloured by how believable I found the heroine's predicament.

An Education is designed for you to like it --- it's the bigger-budget production, has a pluckier heroine and makes 1960's London and Paris look like the bee's knees. But the problem at the root of the picture is that I never sympathized with Jenny (Carey Mulligan*) for a moment. She faces the choice of either continuing her high school education and then studying English at Oxford, or getting engaged to the dashing stranger David (Peter Sarsgaard) that sweeps her off her feet. The audience is theoretically supposed to embrace Jenny escaping her drab world and get as seduced as she does by David's world, while still noticing the little warning signs that things won't turn out well. This would be well and good except director Lone Scherfig makes the "little warning signs" about as tall as Dikembe Mutumbo. First of all, it's Peter Sarsgaard, one of the naturally more off-putting actors in film today. OF COURSE he'll turn out to be a heel. I'm not spoiling anything for you, folks, since he might as well be wearing a big 'villain' stamp on his forehead. Defenders of the film might acknowledge that you're supposed to easily note the trouble that Jenny is getting herself into since she's a teenage girl being seduced, but David's phoniness is presented in such an overt way that you don't feel sorry for Jenny, but rather think she's a dope for a) falling for it and b) being so shallow. There's a difference between being seduced and being suckered, and it really undermines Jenny's intelligence (which, as we're reminded, she has in spades) to have her so easily fooled by Sarsgaard's bullshit. 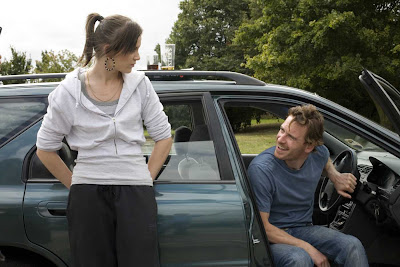 Fish Tank director Andrea Arnold avoids this problem rather elegantly, which is probably the only time you'll see that word used in conjunction with this purposely inelegant film. Whereas you're supposed to like and sympathize with Jenny, it's much harder to like Mia, the combative, somewhat ferocious, lower-class would-be dancer from the modern-day Essex projects who will just as soon as headbutt you as look at you. (She actually does headbutt someone in the first five minutes of the movie. It's awesome.) Katie Jarvis doesn't so much say Mia's lines as she does spit them out. It's a charmless performance, but hardly an unsympathetic one. Mia's situation is so dire, in fact, that you can't help but feel sorry for her. The stakes are a lot higher in Fish Tank than in An Education. The worst thing that can happen to Jenny is that she might have to enroll in school again or re-take her A-Level tests. The worst thing that can happen to Mia is, well lord, you name it. The feeling of impending dread is always near, and the fact that Mia's only avenue of escape is her modest goal of being a hip-hop dancer underscores the lack of options open to her given her family situation, upbringing and class.

It all culminates with a stunning sequence that takes place at the home of Mia's mother's boyfriend Connor, played by Michael Fassbender. Mia shows up at the house uninvited and discovers something about Connor. What follows is about 10-15 minutes of pure tension since Mia chooses to vent her anger in a potentially frightening way, and you wonder just where the movie is going with this. "Fish Tank" is not perfectly filmed, but wow, this sequence just might be the most suspenseful scene I've seen in a while. I'm being sparse on the details here, which is a sign of endorsement in itself --- with An Education, I don't mind spoiling parts, but with Fish Tank I want you to see it for yourself.

While I do prefer Fish Tank as a movie, it's a narrower call than you might think given how much I've ragged on An Education. The latter film is slicker, tells its story in a smoother way and the performances do a lot to carry the predictable story. Fish Tank is shot in almost a documentary style, leading to long stretches where you'll be checking your watch. I dare say it all pays off given that great scene at Connor's house, but it's a bit of a slog to get there. There's also a subplot about a horse that's pretty pointless. An Education is more entertaining but you'll forget about it five minutes after you leave the theatre, whereas Fish Tank isn't as easy to get into but it'll make you think more. Put it this way: if you actually do find that hypothetical essay linking these two films, the student will probably spend five pages on Scherfig's movie and 10 pages on Arnold's movie. And if the phrase 'compare and contrast' is used in the introduction, then brother, that's going to be one lazily-written essay.

* = Carey Mulligan reminds me of the anecdote from Joe Posnanski's book about the legendary Buck O'Neill. They're watching batting practice, when Buck points to Willy Taveras and says he looks like a young Willie Mays. Joe was astonished --- Taveras was and is a pretty mediocre outfielder. What, Joe asked, did the wise old O'Neill see in Taveras that reminded him of the great Mays? O'Neill responded by saving that, no, Taveras just physically looked a lot like Willie Mays in terms of facial features. That anecdote applies to Ms. Mulligan since she reminds me of a young Judi Dench. The resemblance is uncanny. It's even more pronounced since Mulligan adopted the short-cut, pixieish hairstyle that looks distinguished when you're in your seventies but looks dopey when you're young. Fortunately for Mulligan, she's a pretty good actress, so the gap talent-wise between she and Dench is a lot smaller than the yawning chasm between Mays and Willy Taveras.
Posted by Question Mark at 1:36 PM