The Trojan War is perhaps the most widely-told of all mythological tales, as the battle between Greece and Troy over Helen’s “face that launched a thousand ships” has been chronicled in one form or another by literally every artistic medium of the last 2000 years.  What makes Shakespeare’s take on the Trojan War in "Troilus & Cressida" rather unique is that he makes this most epic of tales so completely mundane.  He includes none of the pageantry commonly associated with the Trojan War (the gods, goddesses, superhuman feats, etc.) and instead makes it just a war.  And not just any war — a war fought over, essentially, a domestic dispute that ends up costing thousands of lives.

Seen as a satire of war in general, and an argument that for all the glory that men associate with battle (something Shakespeare himself is guilty of on more than a few occasions) it’s ultimately innocent lives being lost over a political disagreement, T&C is a pretty interesting play.  Interesting to discuss, that is; reading it is a different story, as the actual text is rather dry and meandering.  I’m sure you could have quite a keen English class discussion about the concept here, yet scene after scene of petty in-fighting amongst the Greek side, subplots that go nowhere, the actual title plot ultimately going nowhere, and just an overall feeling of ennui within the story doesn’t make for a great read.

Let’s start with that title plot, which has to be one of the most underdeveloped* of any in Shakespeare’s canon.  Troilus and Cressida have to be right up there with Cymbeline as the title characters who have the least to do in their named plays.  I guess it was simply the convention of the time for Shakespeare to call it “The Tragedy of Troilus & Cressida” or whatever rather than some ironic title like, oh, I dunno, “The Trojan War Was Very Silly Indeed.”

* = underdeveloped, but not uninteresting.  There’s an alternate reality where Shakespeare focuses more on Troilus and Cressida’s story and puts the feuding Trojans and Greeks on the backburner, and it makes for a much stronger play.

In theory, the title might tie into the overall theme — rather than some heroic title, or even “Achilles” or “Ajax vs. Hector,” Shakespeare ignores the war and the major mythic personages to focus on two fairly minor personalities.  If you’re asking what’s the point of naming the play about the Trojan War over this minor romantic melodrama, consider that big-picture, the entire war was over a minor romantic melodrama. 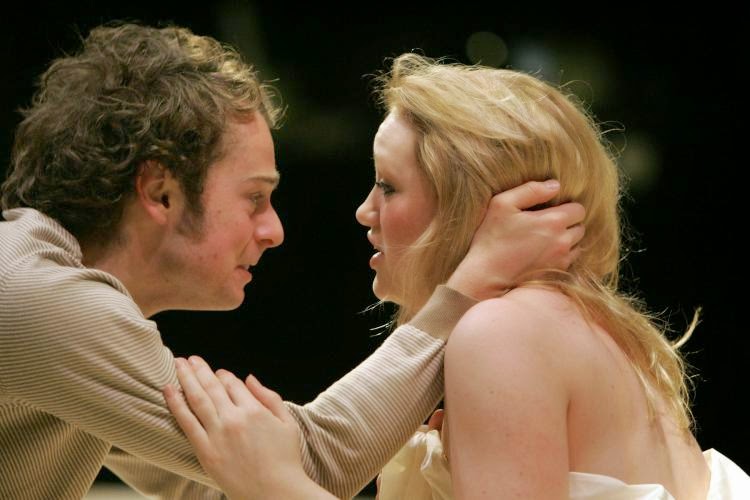 And make no mistake, Shakespeare considers the Helen/Paris/Menelaus love triangle to be a trifle.  Menelaus (the King Of Sparta himself!) is barely even in the play, and Helen herself only appears in one scene, that little bit of bawdiness with Paris and Pandarus.  That’s right, the legendary Helen Of Troy is essentially a bit part.  It’s essentially Shakespeare reducing her to an Ann Veal-esque “her?”  Apparently some productions over the years have played with this scene by casting Helen as a man in drag, or really uglying up the actress in the role to drive home the point that the Trojan War was fought over thoroughly minor reasons.  (Though this type of casting undercuts Shakespeare’s point; it’s implying that if Helen really was a true knockout, then the war would’ve been “worth it” or something.)

It’s worth nothing that Helen’s only scene comes directly after the debate in Act II, Scene ii when Priam and his sons are debating whether or not the war should continue.  Paris and Troilus “win” the argument under the always-stupid “well, we’ve fought this long already, so it would truly be pointless if we gave up now” reasoning.  Their point is immediately undercut by the goofiness of the Helen scene, making Shakespeare’s opinion pretty clear.  Everything here is just “still wars and lechery, nothing else holds fashion,” as Thersites* puts it in Act V, Scene ii.

* = between Broadchurch, Game Of Thrones and the Harry Potter movies, I absolutely pictured David “Walder Frey” Bradley in my head during all of Thersites’ lines.

So you have Helen brought low, making her par for the course with the rest of the legendary figures within the play.  Achilles isn’t a legendary warrior, but instead just a petulant egomaniac.  Ajax is indeed portrayed as a quality warrior, though an easily-manipulated meathead (who also has a healthy ego on him).  Again, Shakespeare isn’t interested in ascribing any traditional valor to these famous names — in the heat of the moment, they’re just a flock of petty squabblers.  It’s the characters themselves who are obsessed with preserving their honour and nobility, as in the case of the Ajax/Hector duel, which is presented less as a major moment in a blood feud of a war than an exhibition at a county fair.  What’s built up as the major plot point in the narrative just fizzles into an unsatisfying draw and then a bunch of courteous banquets and back-slapping like something was actually accomplished by either warrior.

It’s a weird coincidence that I read T&C just after Cymbeline in this series, as the plays share a lot of similarities.  First time I’d read either, I knew nothing about either play going in, both have title characters with pretty minor roles, and both are sprawling “historical” epics (though in Cymbeline’s case, it’s Shakespeare wholly inventing a fanciful tale with no regard for the actual history of the people he uses as characters, whereas in T&C he takes completely fictional characters and portrays them in a more realistic light).  I loved Cymbeline, however, since it was so unapologetic in being over-the-top.  By remaining so insular and bitter, conversely, T&C is a hard play to like.  You can maybe admire it, yet Shakespeare goes a long way to make a pretty basic point.

My New Year's resolution for 2012 was to re-read (and in some cases, read for the first time) all 38 of William Shakespeare's plays.  2012 has long since ended, but still, onward and upward.  And, since in these modern times it's impossible to undertake a personal project without blogging about it, here are a series of reviews/personal observances I'll make about the plays.  Well, 'reviews' is a bit of a stretch.  It's William goddamn Shakespeare.  What am I going to tell you, "Don't bother reading this one, folks!  What a stinker!  Ol' Mark doesn't like it, so you should definitely believe ME over 400 years of dramatic criticism!"
Posted by Question Mark at 1:34 AM