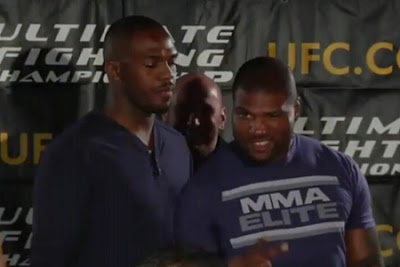 * Nate Diaz over Takanori Gomi, submission, R2
The book on Gomi is pretty easy: avoid his stand-up game by taking him down and submitting him or outwrestling him for a TKO. Under normal circumstances I'd think that Nate might be stupid enough to actually stand with Gomi, but Nate's lost two in a row and presumably he doesn't want to get cut from the UFC. (Then again, who knows how these Diaz brothers operate.) Fun fact: Nick Diaz famously upset Gomi in PRIDE but the result was turned into a no-contest after Nick tested positive for marijuana afterwards. Oh, those Diaz kids. What scamps! Nick Diaz might be the real-life version of the guy in Pearl Jam's song "Off He Goes."

* Travis Browne over Rob Broughton, KO, R2
This could and should be a slugfest between big ol' heavyweights. It isn't quite my usual "pick against British fighters since British fighters generally suck" rule since Broughton brings some decent wrestling and submissions to the table rather than just going in there and swinging his arms like Lisa Simpson. But, while I wouldn't put a ton of emphasis on Browne's unbeaten record, he's beaten a higher caliber of opponents than Broughton. A win here makes Browne 3-0-1 in the UFC and probably on the verge of a contenders' bout in the thin heavyweight division --- pretty impressive for a guy who we still don't know is actually a good fighter.

* Ben Rothwell over Mark Hunt, submission, R1
I can't believe Mark Hunt actually won a fight. Chris Tuchscherer (a.k.a. 'The Guy Who Hunt Knocked Out At UFC 127'), you should be ashamed of yourself, and you were deservedly cut. Now, SURELY Ben Rothwell, since you're not a total tomato can, you can put this guy into retirement, right? Hunt's career MMA record is 6-7, for god's sakes. Rothwell is no great shakes as a fighter but even he should be above Hunt's stature at this point in his career.

* Josh Koscheck over Matt Hughes, submission, R2
The fight was originally supposed to be Hughes vs. Diego Sanchez, but once Sanchez got hurt, Koscheck stepped up for his big return to the cage. When last we saw Kos, Georges St. Pierre was jabbing him again and again and again and again and again and again and again until Koscheck's face began to resemble a Halloween mask. It stands to reason that he could be a bit gun-shy in his first match back, which is why I'm predicting a sub win over Hughes. Basically, this one is "Koscheck by however he wants," since he is a big step beyond what Hughes is capable of beating at this point in his career. Hughes' only chance is if Koscheck is REALLY gun-shy and Hughes suddenly finds himself with an advantage in striking. Chalk this one up for a comeback win for Koscheck and then Hughes can continue taking semi-ceremonial fights in the twilight of his career. I'd still like to see him face Sanchez, that would be an interesting matchup.

* Jon Jones over Rampage Jackson, decision
As a johnny-come-lately MMA fan who got into the UFC when everyone else did (2006-07), I've never seen Rampage Jackson in trouble. I've seen him get hit hard a few times and I've seen him get taken down to the mat, but still, I can't recall a UFC Jackson fight where I've actually thought he was going down. Now, Rampage has certainly lost before and gotten his ass kicked before, perhaps most notably three beatdowns from Wanderlei Silva and Shogun Rua in PRIDE, but to my eyes, the idea of Rampage being totally worked over is almost inconceivable. He's 10-2 in his last 12 fights and those two losses were close decisions to Rashad Evans and Forrest Griffin.

Now, here comes Jon Jones, the guy who's been destroying everyone in his path. We sort of have an unstoppable force vs. immovable object situation here except there are hints that neither fighter quite lives up to that billing. While I'm *almost* ready to buy into the Bones Jones hype, I'd argue that he needs a decisive win over Jackson to cement him as the next big thing. Whipping Shogun was impressive, but that was a Rua who was coming off a year layoff and major knee surgery. Besides the Shogun result, Jones' best win is over Vladimir Matyushenko, who's a tough guy but certainly not in the upper tier of light-heavyweights. (Though Jones' destruction of him was admittedly very impressive.) Rampage, while he's been winning, hasn't looked great in recent wins over Lyoto Machida, Matt Hamill, Keith Jardine, and that Machida fight could've easily gone the other way.

Is Rampage really over the hill and he just hasn't fought anyone explosive enough to take advantage of this yet? Or, will Jones be swallowed by the hype of his first LHW title defence and start to panic (or tire in the later rounds) if Rampage isn't fazed by his striking? My pick is Jones simply because he might just be that good and Rampage's recent performances have left me something to be desired….but it wouldn't shock me whatsoever if Rampage lands a big shot and Jones crumbles, having never been tested like this before. Terrific matchup and a really hard-to-pick main event.