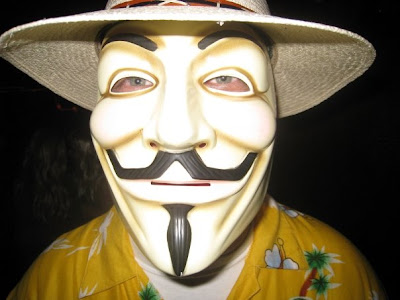 Creepy as shit, eh? I decided to put a bit of effort into this year's costume after phoning in the last few Halloweens. Last year I went as Charlie Brown, which entailed simply putting on my Charlie Brown-patterned shirt. In 2006 I was....hmm, that's odd, I literally have no memory of Halloween 2006. Uh oh. Either I'm going senile or else I just stayed at home like a lump and dressed as a surly guy who got gradually more irritated at answering the door for trick-or-treaters. In 2005 I was Mr. Clean, which was pretty simple aside from some white eyebrow paint. I haven't really come up with anything truly original since my legendary NAFTA costume in 2003.

So clearly it was time to raise the bar a little bit. My first idea was to get a Predator mask and Hugh Hefner-esque pajamas and robe, and then go as a Sexual Predator. So I went down to McCullough's in London and looked around for a Predator mask, but no dice. It's possible they were all sold out, or else maybe it's just a damn complicated mask to get one's hands on without being a personal friend of the late Rick Baker. I did see a couple of Alien masks, so in this round of Alien vs. Predator (which, in my world, is more like Kenny vs. Spenny), Alien wins the "whose costume is more readily available" contest. The punishment for Predator is that he....has to watch Alien vs. Predator. Unfortunate.

The mask I did pick up, after all of this, was a V mask, as in V For Vendetta. Immediately my creative brain went into overdrive trying to think up some clever costume rather than just going as V himself --- I could find a shirt with giant 'D,' a giant W or a giant 8 on it and go as either a VD, a VW or a V8. Or I could wear the mask and golf gear and go as V-jay Singh, though that ran the risk of being tres racist.

But in the end, the choice was simply the V mask plus the panama hat, Hawaiian shirt and cargo pants. Ergo, I was V For Vacation. To drive it home I should've constantly carried around a fruity drink with one of those bendy straws, which also would've been convenient given how I needed a straw to drink anything anyway. But still, it was a V-ery effective costume. My friend Maggie was literally scared of the mask and pretty much just glared at me all evening long. This also led her to post the immortal message, "I hate your awful face" on my Facebook wall. I dunno what her problem was --- she came as Rihanna, and you didn't see me get all freaked out due to my aversion to shitty music.

The actual Halloween involved three(!) separate parties, which maybe sounds social, but when two involved cover charges, it made one (read: me) sorta wish there had just been one central party locale. The first was a house party in Little Italy, which ended up actually being thrown by some friends of mine --- I had merely been told 'oh, a friend is hosting' by a mutual friend, and it turned out this mutual friend was friends with some other old friends of mine. I made that sound way more complicated than it was. It was more like, "Oh wait, THIS is the address we're going to? I know these people! Yaaayyyy! [/Kermit]" The best part about walking in full V getup in Little Italy was that some Italian guys actually yelled 'Vendetta! Vendetta!' at me like they were Sideshow Bob's son or something. Good times.

So, the costumes on display in our group included: Tippi Hedren from The Birds, T-Pain, Cat Deeley, Dracula, Sarah Palin, Sarah Palin's Russian friend, Lisa 'Left Eye' Lopes, a female Robin Hood's Merry Man (so, a Merry Woman?), Bunsen and Beeker and, as noted, Rihanna. This was the crew that headed off to another party at the Legion (ah, patriotism), and then down to Captain John's, a.k.a. that boat/seafood restaurant down at Yonge and Queens Quay. Captain John's was something of a gong show. The hallways were more crowded than the hallways of the Titanic when the boat started to take on water. The bar was run on a complicated token system which just jammed things up even more as now people had to first wait in line to get a token like it was a frickin' carnival or something, and then had to stand in line yet again just to get an overpriced drink. For shame, Captain John's. I'll never eat there again. [Editor's Note: Mark has never eaten there and doesn't really like seafood. Idle vows are always fun.]

The next night's party was just a singular house party event, held on November 1 and thus really more of a Daylight Savings party. Though everyone came in costume --- I guess we set our clocks back one whole day, eh gang?!?! What a Bob Saget joke. Anyway, the highlights here included Teen Wolf, Dexter, a ten-dollar bill, Magnum P.I., Bernie from Weekend at Bernie's, Poison Ivy, two Care Bears, Mr. Halloween (a collection of generic, shitty costumes all in one), Juno and Bleeker, Anton Chigurh, a sperm, Robin and Nightwing (my pals Ian and Dave, both of whom spent upwards of $200 on their costumes and, in Ian's case, actually spent the previous three months working out to do the costume justice. Dude.), Catwoman, a Ghostbuster, the devil, a banana, a pirate, Amy Winehouse and the winner of the evening's costume contest, my friend Chelsea as a middle-aged cougar. Interestingly enough, the first couple of people to see my costume said, "Hey, Guy Fawkes!" so it was a pretty well-educated crowd. Then I kicked myself for not wearing the mask and a prosthetic leg and going as Terry Fawkes. My friend Matt at least thought I was actually Angel from Dexter, which was pretty hilarious. Go back and look at that picture of me again. If David Zayas is reading this blog, a single tear is no doubt running down his face as he is on the verge of an Elephant Man-esque diatribe about how hideous he looks. Don't cry, David --- take solace in the fact that every Halloween, you can always wear a stethoscope and go as Dr. Zayas, and sing that Simpsons tune from the Planet of the Apes musical all night.

Final tally over the two nights: four Jokers, four Sarah Palins. It's a draw! Those were by far the two most popular costumes for men and women respectively this year. My friend Lori (the Palin from the first party) was worried her outfit wasn't going to be very original, so I suggested a half-Palin, half-Joker hybrid. Just wear a purple power suit, half of which is all dirty and grimy, paint half your face and hair, and boom, there it is. It's the perfect postmodern summation of the 2008 Halloween season --- half crazy maniac, and half Joker.
Posted by Question Mark at 12:42 AM

1. Can't believe you mentioned Captain John's without telling the story of the three of us going there after a Jays and being told that we couldn't get in for over an hour because we didn't have a reservation, despite the fact that the restaurant was completely empty.

2. Did the Teen Wolf costume actually include an authentic yellow Beavers jersey...or was it something more generic? Was it at least yellow? I need to know these things...