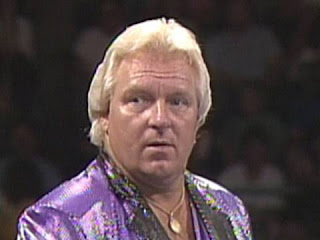 One of the single funniest TV personalities of all time, Bobby "The Brain" Heenan was the perfect pro wrestling heel.  He was an unabashed jerk who was "officially" hated since he managed bad guys and talked down to the faces, but secretly beloved by fans because he was so outstandingly good in every aspect of performance.

Nobody was better at playing the arrogant heel and, as a crucial by-product, nobody was better at taking comeuppance for his heelish acts.  Heenan was a master at getting one-upped --- whether it was taking an actual beating in the ring, being dealt some humiliation like having water poured on him or being dressed in a weasel costume, or simply getting verbally owned by Gorilla Monsoon, nobody sold comic exasperation like Bobby Heenan.

His commentary job in the 1992 Royal Rumble is often held up as maybe the single best broadcasting work in wrestling history.  Heenan has to carry the story of his man, Ric Flair, being the #3 entry out of 30 wrestlers and lasting all the way to the end.  The Brain goes from being speechless with rage over Flair's unlucky entry number, to desperate over-confidence, to cheering every time Flair gets any sort of advantage in the match, to openly pleading with other wrestlers in the ring to help Flair out (and then hilariously ripping them for attacking Flair), to openly pleading with God himself to let Flair win, and then to final joy when Flair actually wins the match.  This was a full hour of commentary brilliance that added immeasurably to the already-great action in the ring ---- the 1992 Rumble is probably my favourite match ever.

My favourite Heenan "performance," however, is slightly lesser-known.  It's the underrated storyline when Randy Savage, in need of a tag team partner for a big match against Ric Flair and Razor Ramon, offers the spot to (of all people) Mr. Perfect, Flair's manager/executive consultant.  Over the course of an entire episode of PrimeTime Wrestling, you see the wheels turn as this seemingly ridiculous proposal from the Macho Man starts to be taken seriously by Perfect, much to Heenan's chagrin.  Everyone, it should be noted, plays their parts really well in these segments --- Vince McMahon, Jim Duggan and Hillbilly Jim stirring the pot, Flair being so egomaniacal that he can't see what's happening until it's too late, Razor being the cocky newcomer with no respect for Perfect's past accomplishments, Savage simply laying out the scenario and Perfect himself as the proud athlete who doesn't feel he's washed up.  But I'd say it's the Brain that really drives things, as he's the one who is unwittingly undermining and insulting Perfect while trying to praise him and laugh off Savage's offer.  It's the perfect example of Bobby "the Brain" outsmarting himself while trying to be the smartest guy in the room.  He just says one word too many, and that's what dooms he, Flair and Razor to somehow losing a chief ally over the course of 30 minutes.
Posted by Question Mark at 4:45 PM